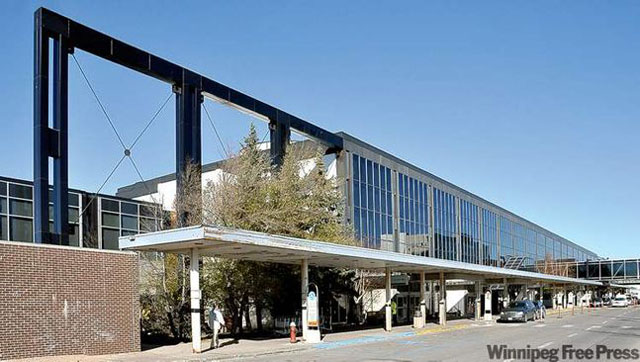 Douglas Adams, author of The Hitchhiker's Guide to the Galaxy, might have felt differently about airports had he seen the new Richardson International Airport terminal that on Sunday welcomed its first visitors.

The new airport stands as an impressive welcome mat for our city, a symbol of modernity and progress. Its dramatic curving glass walls anchor the building to the prairie horizon and celebrate in a single sweeping view the light and landscape that define our province. It has space, colour and light in proportions that stimulate the visitor and inspire a feeling of pride.

That last sentence, although an appropriate description of the new building, was actually written in the Winnipeg Tribune in 1964 for the opening of the terminal it is replacing. The completion of the new airport has focused public attention on the fate of its familiar old neighbour, celebrated as one of the finest pieces of Modernist architecture in Canada.

The debate over the demolition of the old terminal highlights a broader question: Why should cities attempt to preserve elements of their built history?

Advocates of historic preservation are often criticized for being motivated by nostalgia while standing in the way of progress and growth. This can sometimes be the case, but successful cities are often able to capitalize on their architectural heritage as a way of attracting growth while enriching the character and livability of their urban environment.

Cities are like storybooks. The most compelling ones are those that weave together layers of complex narrative. We travel to places like Montreal and New York and are inspired by the rich texture of their streetscapes. The buildings narrate the stories of those cities, making them more interesting to visit, more comfortable to live in and more attractive to invest in.

The most interesting cities are those that maintain a rich mixture of buildings that represent different periods in history, knit together in an urban tapestry. It isn't loudly celebrated, but Winnipeg is lucky enough to be one of these cities. Our distinct collection of buildings uniquely illustrates the lineage of modern Canadian design throughout the last century.

Winnipeg's diverse assemblage of building styles has even piqued the interest of John Martins-Manteiga, director of the Toronto museum Dominion Modern, billed as "Canada's foremost archive of 20th-century Canadian architecture and design."

Dominion Modern is an institution that promotes and celebrates design through high-quality publications and sensational, almost theatrical exhibitions that inspire public dialogue and education.

Martins-Manteiga describes Winnipeg as a "tremendous city" with a "jaw-dropping inventory of 19th- and 20th-century architecture." He sees great potential to capitalize on this asset and celebrate the city's diverse architectural heritage on a national stage.

For these reasons, Dominion Modern has listed Winnipeg as a possible location (along with Toronto) for a long-sought-after permanent home for its collections. Martins-Manteiga foresees building partnerships with the local design community and with institutions such as the University of Manitoba, while using Winnipeg's architectural heritage as a base from which Dominion Modern could record and promote design across Canada.

A permanent gallery for Dominion Modern in the perfect container would be an exciting addition to Winnipeg's vibrant artistic and cultural community. Martins-Manteiga's hope is to find a well preserved Modernist gem in a busy location that invites passersby to wander in and explore its collections.

It is not often that a Toronto cultural institution considers relocating to a city like Winnipeg. Dominion Modern's interest is a testament to the unique physical character of our city and should serve to inspire an increased public awareness for our often unappreciated built environment.

Martins-Manteiga says the Modernist airport terminal has long been an important contributor to Winnipeg's diverse urban character. He sees it as a central part of our history, with few buildings holding a more prominent place in the city's narrative. He argues that exploring opportunities to facilitate the rebirth of the old terminal is not only environmentally responsible, but could enrich the character of the airport campus as a proud counterpoint to the new building.

Winnipeg's diverse collection of historic architecture is generally the product of low redevelopment pressure. The result today is an opportunity to capitalize on an asset that many other cities have lost.

It often takes an outsider's perspective to make us appreciate what we have. Dominion Modern's interest in Winnipeg highlights the contribution that buildings from different periods in our history, including the Modernist era of the airport, can make in creating an attractive urban character. It reinforces the argument that strategic preservation can act as a catalyst for growth and not be an obstacle to it.

Republished from the Winnipeg Free Press print edition October 31, 2011 B5