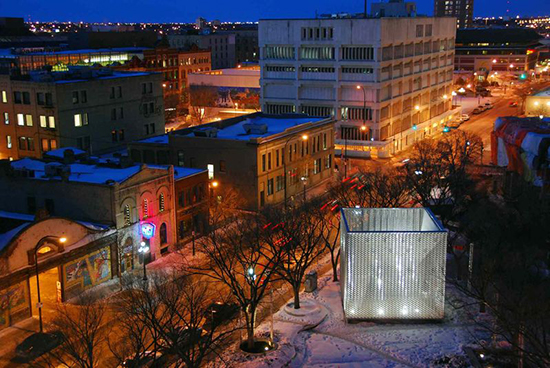 Many of the city's new buildings are being recognized across the globe for their design excellence. Several have won prestigious international awards, ranging from large projects such as Manitoba Hydro Place and the Millennium Library to smaller works such as Old Market Square's Cube Stage and Assiniboine Park's shipping-container washrooms.

The unique quality of Winnipeg's architecture has even begun to spark mainstream interest in the city as a potential tourist destination. Last May, Air Canada's En Route magazine celebrated "Winnipeg's architectural Renaissance" and Maclean's is currently running a promotion that lists the architecture of Winnipeg as one of the Ten Places You've Got to See in Canada (www.placestosee.macleans.ca). The Travel Channel recently named Richardson International Airport one of the world's most iconic terminals and the influential travel writers at Vacay.ca listed Winnipeg as a top-five place to visit in 2014, thanks in large part to the opening of the iconic Canadian Museum for Human Rights.

This week, in recognition of the Manitoba Association of Architects' centennial anniversary, Winnipeg will be hosting the Royal Architectural Institute of Canada's (RAIC) national conference. As 400 architects from across the country descend on the city, it is an opportunity to step back and celebrate this new design vibe with our guests and with each other.

Inviting the public to be part of this celebration, Storefront Manitoba, a non-profit group dedicated to promoting awareness and appreciation of architecture and design, has organized an Architectural Fringe Festival to run parallel with the RAIC conference. The festival is intended to connect the people of Winnipeg with the architecture of their city. Events will include a range of fun, urban experiences to be held at unique locations across the downtown. The event schedule can be found at www.storefrontmb.ca.

Highlights of the festival include: a screening of two locally produced documentary films to be shown in the cobblestone tunnel under the tracks at The Forks, an On the Boards sneak-peek presentation of work currently in the design phase by four internationally acclaimed Canadian architects, a party with the WSO Brass Ensemble in a century-old courtyard in Osborne Village, urban golf in the Exchange District (with tennis balls), a 'design jam' urbanist brainstorming session and an exhibition at RAW Gallery.

Throughout the week, the exhibit Here and Now, Architecture in Winnipeg 2004-2014 will be showcasing a snapshot of the creative burst in the city's architectural energy over the last decade. Projects from 20 local offices will be paired with the work of University of Manitoba students and displayed through a series of physical models and projected images. The exhibition will highlight the innovative ideas that are inspiring Winnipeg's emerging architectural scene.

The festival will end with an explosion of activity as 1,200 people gather at the world's longest dinner table (365 metres) at a prominent but secret outdoor site in the downtown. Participants at the Table for 1,200 event will be told the location one hour prior to the start and will scramble to the pop-up dinner with their own chairs, construct a unique centrepiece as part of a design competition and then be served a formal, Prairie-themed dinner while engaging in discussion about architecture and design. The event will be a spectacle that reinforces to the world the fact something special is happening in Winnipeg's design community.

The magnificent event will be the culmination of the Table for 12 initiative spearheaded by acclaimed local firm 5468796 Architecture. Last year, the innovative, young office was awarded the prestigious Prix de Rome from the Canada Council of the Arts, allowing them to travel to eight cities around the world and sit at dinners of 12, made up of local architects, policy-makers and artists, engaging in discussion about the catalysts that have fostered a strong design culture in each city. The hope is the information can be translated into a Canadian context and used to empower and grow our own design culture within the broader community.

The unique events taking place this week are a manifestation of the new creative energy in Winnipeg. They will be a celebration of the innovative ideas that have taken our quirky little city and placed it on an international stage for art and architecture. If, as a community, we are able to nurture a pervasive design culture and grow our appreciation for the built environment, we might fan this recent creative spark into flames that leave a transformational legacy, just as the architects of the city's golden era did 100 years ago.