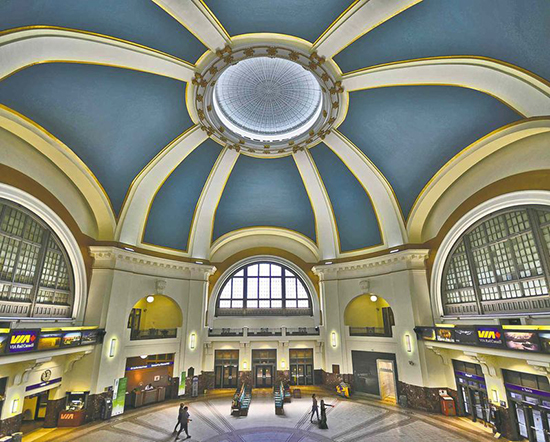 More than a century later, Union Station, now owned by Via Rail Canada, welcomes fewer than 25,000 passengers each year. Gone is the bustle of the surrounding neighbourhood, its stately beaux arts limestone facade is today surrounded by parking lots along a decaying stretch of a once-proud Main Street.

Recently, the promise of change has begun to appear in the area surrounding the old depot. The imminent opening of the Canadian Museum for Human Rights has triggered The Forks to move forward with development planning of the land on the other side of the rail line.

Upper Fort Garry Heritage Park is being built across the street, and two highrise residential towers are under construction along nearby Assiniboine Avenue. The city's downtown development agency CentreVenture, announced it will focus revitalization efforts on south Main Street and the opening of Portage and Main may be only a few years away.

Union Station sits quietly today, surrounded by this series of disparate plans and construction projects downtown. Looking at the success other North American cities have had translating their historic train terminals into broader urban renewal, the opportunity may exist to explore Union Station's potential as a catalyst that unifies these projects and elevates them into a larger, more cohesive strategy for growth and development.

In 2009, the United States government created an economic stimulus package that provided financing for urban transportation projects. This caused cities such as Los Angeles, Washington, D.C., and St. Paul, Minn., to look at their own underused railway stations as opportunities to centralize various urban transportation networks into single multi-modal hubs that bring commuters together, creating a concentration of economic activity that stimulates redevelopment in surrounding neighbourhoods.

The City of Denver translated the renewal of its century-old train station, which reopened last week as a boutique hotel and retail centre, into a catalyst that is fuelling what is currently the most active development site in the United States.
In 2004, a tax-increment financing program was set up for a 36-hectare section of Denver's downtown and a master plan was developed that included markets, plazas and public space.

At the centre of the plan sits a multi-modal transit hub that amalgamates light rail, intercity rail, regional and local buses, taxis, bike routes and pedestrian networks into a central location surrounding the historic Union Station.

Tying the development together is an open-air train hall, with a dramatic, sweeping, translucent roof spanning more than 60 metres and rising 20 metres over the platform below.

The attraction and activity of the transportation centre have elevated adjacent property values and have become a catalyst and anchor to two new urban infill neighbourhoods.

Thirteen buildings are under construction in the area, totalling more than four million square feet of development, spawning a renaissance in downtown Denver.

Vancouver's Waterfront Station, a building that resembles Winnipeg's old CPR Terminal on Higgins Avenue, has seen a 30-year, gradual transformation into a busy multi-modal facility in that city.

Today, the building serves as a hub for the Sea Bus Ferry, three lines of the SkyTrain rapid-transit system, local buses and commuter rail service. Two adjacent office towers are currently proposed, one with a cycling facility that includes storage and showers to accommodate downtown bike commuters.

Vancouver's Regional Transportation Authority is developing a waterfront-hub-transportation concept plan, which will transform the station into a world-class transportation facility, connecting the waterfront to the downtown and spurring even more commercial growth in its urban surroundings.

The 60-year political struggle Winnipeg has faced with rapid transit might suggest an uphill climb to redevelop Union Station into a similar multi-modal terminal.

Understanding the success these types of projects have had as growth catalysts in other cities might at least serve as inspiration to begin looking for new opportunities to broaden the role of the historic building as a modern transportation centre in downtown.

A key first move would be to extend the current bus-rapid-transit corridor across Main Street and up onto the raised rail line behind Union Station, establishing it as a central stop for The Forks and downtown, before descending on to the Graham Avenue transit corridor.

Other initiatives -- such as creating amenities like bike storage, rental and repair services -- would help draw connections between the Assiniboine Avenue cycle track and The Forks' plans to develop a cycling network through its site.
With some creativity, Union Station could be made the central hub of other transportation networks such as a possible airport shuttle, tourist amenities like the Prairie Dog Central, river tours and water-bus service, even a potential trolley car circulating through downtown.

As new rapid-transit lines are built, Union Station could serve as their downtown terminus, further establishing its role as a transportation hub.

With a unified vision and concentrated effort by various stakeholders, small moves such as these may begin to unlock the grand historic building's potential as a multi-modal hub downtown.

Transportation has proven to be a successful catalyst for urban renewal in many cities.

A redefined Union Station represents the opportunity to unify and enhance development already happening in the area, stimulating growth by bringing pedestrian traffic to south Main Street, drawing the life and vibrancy of The Forks out and into the rest of downtown and reinvigorating the adjacent Broadway-Assiniboine residential neighbourhood.

Hopefully, one day the spectacular central hall of Union Station will again bustle with activity as a modern transportation hub, helping to restore Main Street's place as a vital artery in the heart of our city.