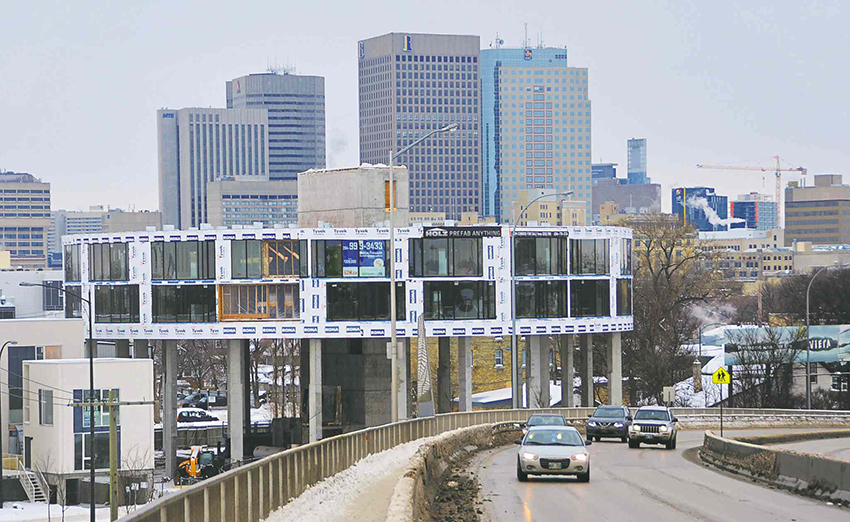 The twin peaks of the CentrePoint development on Portage Avenue feature office space, two ground-floor restaurants, loft-style condominium units and a trendy boutique hotel. Residential density south of Broadway will be bolstered by the luxury condominiums of D Condo and the rental apartments and townhouses of Heritage Landing, both going up on Assiniboine Avenue. The University of Winnipeg's residence rising behind the art gallery will include a unique blend of affordable student housing and market rentals.

These highrise towers can be status symbols that help build confidence in the psyche of a modern city, but they alone are generally unable to create the sidewalk activity, as well as the economic and social networks, needed to establish a vibrant downtown community. The long-term health of our downtown is equally dependent on the smaller, fine-grained residential development that settles in around these larger projects, shaping the pedestrian landscape and establishing the density and diversity required for a prosperous urban neighbourhood.

With a good mix of large and small residential projects breaking ground, 2015 was a pretty good year for downtown Winnipeg in this regard as well.

Over the last 10 years, approximately 2,000 residential units have been constructed downtown, increasing the area's population to 16,000, its highest in the city's history. The momentum of this growth, spurred by a successful provincial/city residential-grant program has snowballed in recent years.

In 2014 alone, 450 new residential units were built. Nearly 400 more were added in 2015, and under construction right now are at least 11 individual projects representing more than 800 new residential units scheduled to take occupancy in 2016. This could make up nearly 20 per cent of Winnipeg's total housing units to be completed this year.

These developments represent a diverse range of projects, from skyscrapers to low-rise new construction as well as heritage building redevelopments, and even a "flying saucer" hovering in the sky over the base of the Disraeli Freeway. Several new projects, such as the Bag Factory Lofts on Alexander and Stables on Adelaide are establishing new beachheads for residential growth in the downtown by locating on the fringes of established areas, taking an important step toward expanding the revitalization of the city centre.

There is promise this unprecedented residential growth in downtown Winnipeg will be augmented by significant new announcements in 2016.

The Forks will likely continue to move forward with its plans to establish a dense urban village on the large parking lots adjacent to the rail line, a project that could be transformational for the image of downtown living in Winnipeg.

Geotechnical testing has begun on the site of True North Square adjacent to the MTS Centre, indicating the three-tower, residential, office and hotel development might soon get underway, filling one of the largest and oldest surface parking lots in the downtown.

The 45-storey SkyCity proposal for Graham Avenue seemed to be a pipe dream in 2013 when its Toronto developers breezed into town with great fanfare, promising the tallest building in the city. With more than one-third of its units already sold, however, the possibility the 'it could never happen in Winnipeg' project might actually happen as early as this year.

Traditionally, about three-quarters of Winnipeg's residential growth happens in new suburbs on the fringes of the city. The increased development in downtown and surrounding mature neighbourhoods has been a small first step toward slowing this struggle with urban sprawl and is beginning to re-introduce a more balanced density to the city. Osborne Village saw a dozen new residential projects in different phases of development in 2015, and inner-city neighbourhoods such as St. Boniface and Wolseley continued their momentum of growth.

Overall in 2015, almost 60 per cent of new housing starts in the city were part of multi-family developments, a significant change from a decade ago and a promising trend toward more sustainable development patterns and higher-density growth.

Downtown is the economic and cultural heart of the city, and its strength is vital for the health of Winnipeg as a whole.

We will likely be faced with a number of questions in 2016 that will affect the trajectory of future residential growth in the downtown.

Will the city finally build the promised Exchange District parkade to support continued heritage building conversions? What will be the fate of the James Avenue Pumping Station? What will replace the Public Safety Building and its parkade? Will we continue to oppose building demolition for the creation of empty lots and surface parking?

These and other questions will hopefully be considered with the overarching goal of establishing a vibrant residential neighbourhood at the city's core.

The past year was a good one for Winnipeg and the downtown. Its skyline is growing and so is its population. If we can build on this momentum by continuing to promote diverse residential development while focusing on building a people-friendly physical environment and investing in the cultural and social amenities that make downtown living attractive, the stage seems to be set for 2016 to be the year we look back on as the beginning of a new chapter in the storyline of Winnipeg's modern evolution.

Republished from the Winnipeg Free Press print edition January 4, 2016 B4