The Past must be part of the future

Thirty years ago, Winnipeg's Exchange District was a hollow collection of pollution-stained industrial warehouses surrounded by treeless streets and empty sidewalks. At night, a checkerboard of dimly lit windows behind the facades of darkened buildings would reveal a subculture of artists and musicians using the low-rent spaces as studios and squatter residences. From the street, the heavy brick walls would only partially muffle the nocturnal sound of rehearsing local rock bands, as old single-pane windows pulsed to the beat of the music inside.

Albert Street was heart of the city's seedy 'red light district', anchored by the Royal Albert and St. Charles Hotels. Their dingy bars, smelling like a potent cocktail of sweat, smoke and marijuana, were the centre of a vibrant local punk rock scene. The district itself was the heart of a thriving artistic community. 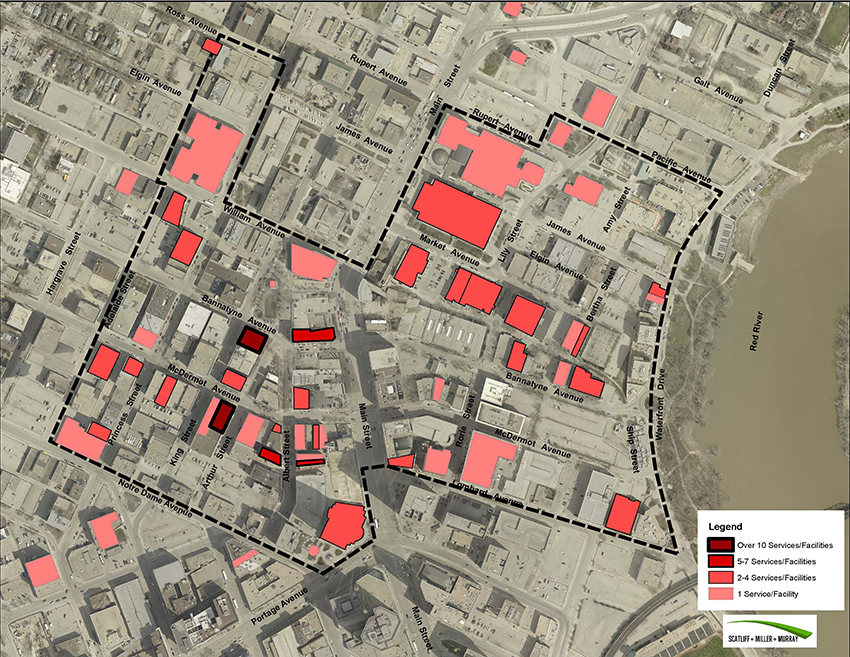 A map locating the creative industries in Winnipeg's Exchange District.

Today, the Exchange is peppered with luxury condominiums, trendy boutiques and restaurants. Old Market Square has become a focus for summer festivals, and the tree-lined sidewalks are often busy with pedestrians.

The area continues to be the hub of Winnipeg's creative community, but today the rock bands have been replaced by students, dancers, architects, designers, filmmakers and digital entrepreneurs. Several of the area's buildings have been redeveloped, but others remain underused and in danger of falling beyond repair. Many of the low-rent artists' spaces that were the seeds of the area's renaissance have disappeared, as expensive upgrades required to meet current building codes preclude anything but high-return redevelopment.

This challenge has brought the Exchange District to a crossroads in its evolution. The area has seen great transformation, but obstacles to it becoming a flourishing, complete neighbourhood still remain, raising the question, where do we go from here?

Thomas Sparling, executive director of ACI Manitoba, a not-for-profit organization that supports arts and cultural industries has been searching for that answer. Sparling, with support from the Winnipeg Chamber of Commerce and several prominent cultural organizations, has been the champion of a plan to capitalize on the Exchange District's traditional role as the centre for Winnipeg's cultural industries by establishing a formal "creative cluster strategy" that guides the physical and economic growth of the Exchange District in the future.

The creative industries centred in the Exchange are part of an important economic driver for the city of Winnipeg. The sector employs 26,000 people and contributes four per cent of the city's GDP, which makes it similar in size to the construction industry or the finance/real estate sector. Cultural tourism also contributes $77 million into Winnipeg's economy each year.

These numbers highlight the value of investing in Winnipeg's cultural industries as an economic-development strategy. The goal for ACI's Exchange District creative campus is to bring the different arts and cultural groups together with government, property owners and private industry to work in collaboration toward the goal of growing the area as a branded and marketed cultural neighbourhood, unlocking the creative potential of both the people and the place.

A cohesive creative campus would build on existing relationships, create marketing and development synergies for various stakeholders and look for opportunities to leverage arts and cultural development as a catalyst for broader neighbourhood, tourism and economic growth.

An organization called Artscape, working in Toronto and Vancouver, presents a successful model for how a Winnipeg creative-cluster initiative might be realized. Artscape is a not-for-profit group that works with governments and developers to leverage art and cultural space to accelerate private development and build diverse, healthy neighbourhoods.

Artscape uses initial public and private funding to cover the capital cost of constructing community focused cultural facilities as part of larger private developments, then manages them as self-sustaining operations, free from continued public subsidy. These developments have included such facilities as subsidized artist's housing and affordable studio and rehearsal space, as well as larger performance venues.

Private developers are eager to accommodate these cultural amenities because they provide a stable, long term tenant and an instant vibrancy and social heart to their developments. Governments see value not only in providing affordable community arts facilities, but in leveraging public investment to incentivize greater privately driven economic growth.

The Artscape project that is most closely related to Winnipeg's creative cluster strategy is an involvement in downtown Toronto's Distillery District redevelopment. Similar to the Exchange District, the area was a series of century old factories and warehouses to be transformed into a vibrant urban community. To achieve this, the developers invited Artscape to be their first anchor tenant, building affordable artist housing, studios, theatres, classrooms and galleries. The presence of artists within the development provided an organic energy and a cachet that was a magnet for market-rate housing and other complementary commercial tenants within the district. Through this investment in affordable art space, the area has become a profitable private commercial development, a centre for cultural tourism and an artistic hub in the city.

Understanding the success of the Distillery District makes it easier to visualize the transformation of vacant spaces throughout Winnipeg's Exchange District into active artist spaces, managed under a creative campus umbrella organization similar to Artscape. Leveraging small-scale cultural investment in a similar way might help retain within the community fabric the independent local artists who once flourished in the area, creating a vibrancy that stimulates private development.

Governments currently provide incentives for housing construction in the Exchange District by directly subsidizing each built unit. A partial shift in focus to a stimulus model that leverages arts and cultural spaces as the catalyst for private investment as they do in Toronto, might reduce the effects of neighbourhood gentrification by moving beyond primarily high-end condominium development and introducing greater social diversity and a population density that is currently lacking in the area.

Public investment in a creative cluster strategy in Winnipeg's Exchange District responds to many identified government priorities at once. It leverages the success of existing creative industries in the area, accelerating growth in one of our city's primary economic sectors. It creates opportunity and affordable housing for young people. It is a continued investment in the protection of our fragile collection of heritage buildings and further promotes a vibrant and prosperous urban neighbourhood that is a catalyst for renewal across the downtown.

Republished from the Winnipeg Free Press print edition November 23, 2015 B6