Give Union Bank Tower the Crown

Union Bank Tower has quietly watched over Winnipeg from the bend in Main Street for 113 years. Symbolic of a more optimistic time, its full significance has been lost in our civic memory. If this elegant building stood in one of Canada’s more confident cities, it might adorn postcards and tourist brochures. In Winnipeg, a small bronze plaque on its facade timidly boasts, "The city’s first skyscraper." A deeper investigation, however, reveals it likely deserves to be celebrated with the much loftier title of "Canada’s first skyscraper." 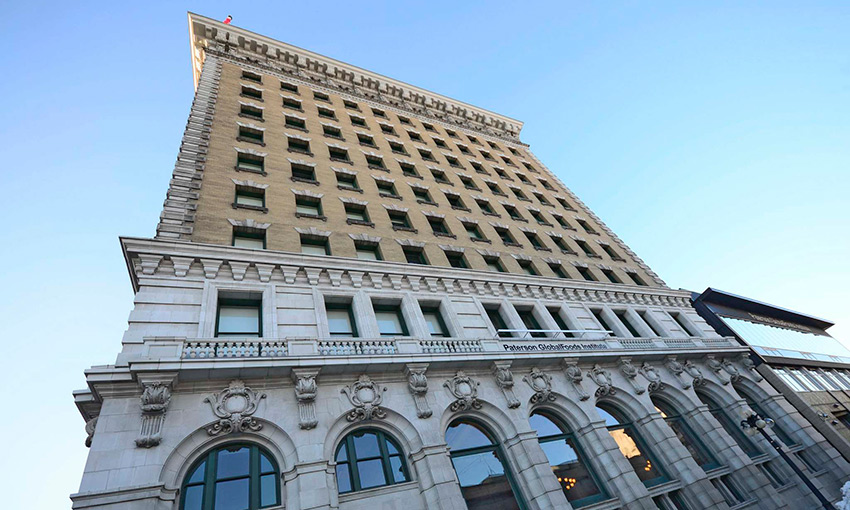 The term "skyscraper" was coined in the late 1800s as buildings in Chicago and New York used new technologies to race toward the sky. The first innovation that facilitated the highrise era was the invention of the electric elevator by the Otis Company in 1857. This made the idea of taller buildings more practical, but it was the steel-frame structural system that made them possible. Thin exterior walls could be hung from the frame, known as a curtain-wall system, replacing heavy, load-bearing walls supported from the ground. This allowed buildings to be lighter and more flexible, unlocking the barriers to height.

The world’s first skyscraper is generally recognized as Chicago’s Home Insurance Building, built in 1885. It was the first structure to have all four ingredients of a modern skyscraper: a high-speed elevator, steel skeleton frame, curtain-wall exterior and a height that was well above typical (then considered to be 10 storeys or taller).

It would be reasonable to assume the same four conditions must be present to define what was Canada’s first skyscraper. As expected, Montreal and Toronto most commonly claim to have buildings that own this title.

Montreal’s contender is the New York Life Insurance Building, constructed in 1889, still standing today beside Notre-Dame Basilica in Place d’Armes. The handsome red sandstone building is eight storeys and 46 metres tall to the top of a clock tower rising above its roof. Even with a low floor count, this height might qualify it as an early skyscraper. Its floors and roof, however, were supported by a cast-iron frame, a precursor to steel used in building construction since the 1700s. Its exterior walls were not hung from this frame, but supported from the ground, requiring a thickness of one metre to hold its own weight.

This lack of modern construction technology makes New York Life the last of a previous generation — not the first of a new.

Toronto, being Toronto, claims two buildings as Canada’s first skyscraper. The earliest was the Temple Building, erected in 1896, at 36 metres tall. Demolished in 1970, Temple was the tallest building in Canada and first to reach 10 storeys, but it also used a cast-iron frame, one of the last highrise buildings in Canada to do so. Its hybrid structural system partially supported the exterior walls, but not as curtain wall. At its ground floor, the stone walls were 1.2 metres thick, narrowing to half a metre at its top. The building was an evolution, but it did not possess all four characteristics required to be considered the very first of a new building type.

Toronto’s second challenger is the Trader’s Bank, a 15-storey, 55-metre, steel-framed, curtain-wall tower with modern elevators. The dominant building in Toronto’s skyline for a decade, it was undoubtedly a skyscraper. It was, however, built two years after Union Bank Tower in Winnipeg.

Designed by prestigious Toronto architects Darling and Pearson, the Union Bank Tower meets every criterion required to take its place at the beginning of the modern skyscraper lineage. At 47.6 metres, it was the tallest building in Canada for two years and the first to go above 10 storeys (it has 11). Its top floor was the second-highest in the British Empire, only one metre below London’s tallest building. It has a steel structural skeleton that fully supports its thin, Lac du Bonnet brick curtain walls. Old construction photos show the exterior brick first being installed at the fifth floor, something that must have been disconcerting for sidewalk pedestrians in 1904.

Union Bank was important enough to make the Otis Elevator Company set up shop in Canada, boasting they would use the largest and fastest elevator in the West and one of the finest in all of Canada.
It was also the reason the Fuller Construction Company first came to this country. Having built most of the landmark buildings of Chicago and New York, including the just-completed Flatiron Building, they were regarded as the world’s foremost skyscraper builders, known familiarly as "Skyscraper Trust."

Fuller would bring one more innovation that further solidifies Union Bank’s place as the first of a new generation. Its construction introduced to Canada the modern concept of a general contractor to hire and supervise trades and oversee construction, quickly spelling the end of architect-led projects, revolutionizing Canada’s building industry to this day.

There are no set rules to define the title of Canada’s first skyscraper. Whoever decides to defend it, owns it. The case for Winnipeg’s Union Bank Tower is more defensible than any other building in Canada, yet it is often conditionally described as Western Canada’s oldest existing skyscraper, or meekly celebrated for once having had the highest flagpole in the British Empire, despite the flag on British Parliament being 40 years older and twice as high.v

It is time we shed these half-hearted proclamations and elevate Winnipeg’s Union Bank Tower to its rightful place in our country’s history, with the unconditional title of Canada’s first skyscraper.