For several decades after the Second World War, many Canadians considered the old buildings in their cities to be symbols of decline, representing a lack of progress. Many cities, throughout the 1960s and ’70s, developed grand plans to replace historic downtown neighbourhoods with freeways, parking lots and mega-projects. In one generation, more than one-fifth of Canada’s historic buildings were demolished. 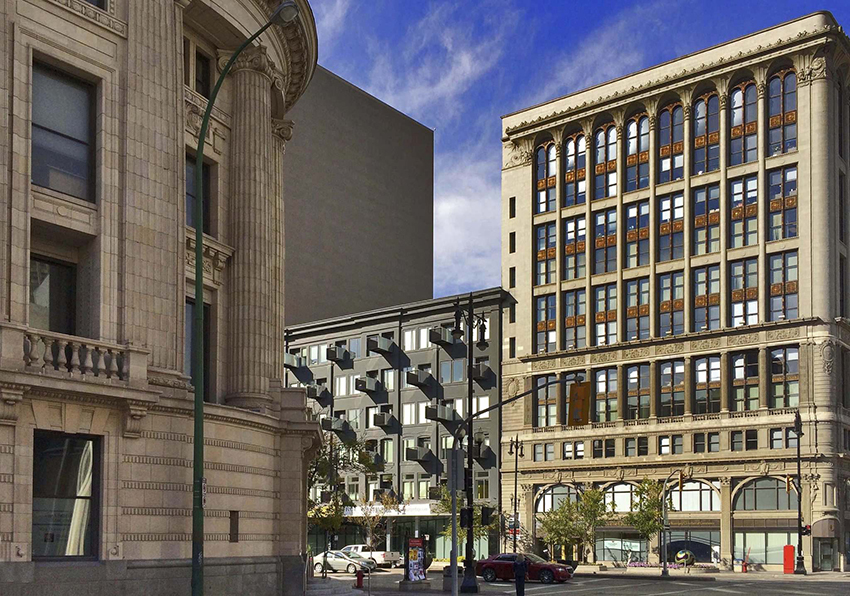 Values have changed and today the areas in Canadian cities that survived the Modernist planning movement are celebrated as places of opportunity and growth. The busiest strip on a Saturday night in downtown Calgary is Stephen Avenue, a street lined with century-old facades. The lanes of Old Montreal, Vancouver’s Gastown and Ottawa’s Byward Market bustle with residents and tourists year-round. In almost every Canadian city, the trendiest, most interesting urban neighbourhoods are the ones filled with old buildings.

Winnipeg is no different. The 1960s had optimistic plans for riverside freeways, broad avenues and ordered, modern apartment blocks, wiping away the past. Only the city’s slow growth saved its old buildings; the blocks of City Hall, Manitoba Museum and Centennial Concert Hall represent the limited manifestation of a plan that was to eliminate the Warehouse District.

Today, the Exchange District National Historic Site, a collection of 117 turn-of-the-20th-century structures, is a catalyst for renewal in Winnipeg’s downtown. Twenty years ago, the area had a population of about 250. Since then, more than 1,500 residential units have been constructed, including 31 heritage building projects, accounting for more than 900 units — the equivalent of six 20-storey apartment buildings. The area is home to dozens of shops, businesses and restaurants and is downtown’s cultural and social hub. The district has even been celebrated recently as a must-see tourist destination in several periodicals, including National Geographic, Vogue, Elle and Reader’s Digest.

Despite these successes, heritage preservation in Canadian cities has been left primarily to municipal and provincial governments, with little federal involvement. Last December, however, a private member’s bill was tabled in the House of Commons by Conservative MP Peter Van Loan, proposing to create federal tax incentives for the preservation of historic places. Recently, Bill C-323 (Rehabilitation of Historic Property) passed second reading and will now proceed to the standing committee on environment and sustainable development before going to a third and final reading.

The bill recommends a 20 per cent tax credit and accelerated tax write-offs for the redevelopment costs of buildings listed on the National Register of Historic Places, with the opportunity to expand eligibility to provincial or civic designations.

Bill C-323 is inspired by the U.S. federal historic tax credit program, in place since 1976. The initiative has been a wildly successful investment tool to leverage private development and grow the national economy. The University of Minnesota recently completed a five-year study of the program’s impact in that state, concluding that for every dollar of tax credit, $9 in economic activity has been generated, creating 11,500 jobs in that time. Federally, more than 42,000 historic properties have been redeveloped under the program, leveraging every tax credit dollar into $5 of private investment.

A study by the Ontario government indicated that heritage restoration projects are 66 per cent more labour-intensive than new building construction, making that type of development at least twice as effective as a job-creating investment. Renovation projects are more environmentally sustainable than new builds as well, using far less energy and significantly reducing landfill waste.

The redevelopment of old buildings can play a key role in urban renewal strategies. With lower development costs than new construction, the affordable rents of older buildings provide opportunity for the startup companies and small businesses that create local employment and promote the commercial diversity and entrepreneurship that is the backbone of a neighbourhood economy. The services and social networks that are supported by the lower rents of older buildings create vibrant and livable urban communities that, in turn, attract larger development such as new condominium towers.

The viability of this plan has already been proved in Canada. In 2001, the Liberal government introduced the commercial heritage properties incentive fund as a similar pilot project. After leveraging public contributions into private investment by a factor of eight, the program was cancelled by the Conservative government in 2007. Today, political roles are reversed, as all opposition parties voted to support the Conservative bill at second reading, with most Liberal MPs voting against it.

The argument to support the protection of our heritage buildings goes beyond economics. These historic structures support our quality of life and help reinforce the emotional connection we have to the cities in which we live. Their scale, texture and craftsmanship inspire a sense of place and community pride, standing as a record of who we are and where we have come from.

It’s rare that a private member’s bill becomes law, but implementing Bill C-323 would be transformational for the future of Canadian cities. If Canadians and members of Parliament rally behind this proposal, we will take an important step toward ensuring our past becomes a vital part of a prosperous future.