The Winnipeg Jets’ playoff run has cast a spotlight on our downtown. Images of hockey-crazed fans dancing in the streets have caught the imagination of the country. 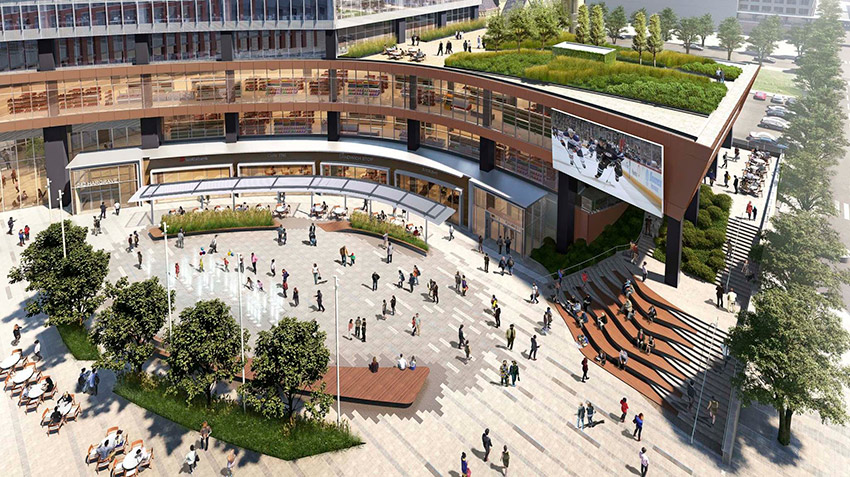 Image: Supplied
Artist’s renderings of the Terracotta Level in True North Square (above) and a wider view of the full project (below)

The Winnipeg Jets’ playoff run has cast a spotlight on our downtown. Images of hockey-crazed fans dancing in the streets have caught the imagination of the country.

Next year, the whiteout celebration will move from its temporary setup to a permanent home at True North Square. The sweeping new plaza, anchored by a six-by-nine-metre video screen, has been planned to accommodate several thousand people for concerts, festivals and other public events, but understanding the potential scale of street parties, the event space has been designed to expand to incorporate Carlton Street to form a huge, block-long festival area set within the four towers of the development.

The long-term success of True North Square as a public space will be measured, however, not only by its function during NHL playoffs, but also by its ability to engage the city and the people who use it every other day of the year. Large public spaces can be a difficult challenge in low-density cities such as Winnipeg, particularly in a downtown that has been designed with much higher priority given to vehicles than pedestrians. Without a determined focus on bringing people to the site and keeping them there, large public spaces can become desolate and unsafe.

The design team of True North Square, Vancouver’s Perkins+Will and PFS Studio, and Winnipeg’s Architecture 49 and McGowan Russell, have developed a plan that grew uniquely from the public spaces outward. Pedestrian connectivity was first considered, establishing pathways and sight lines through the development that link the major buildings in the area, including the arena and convention centre.

The public space then was organized around this circulation, and finally, buildings were composed along the plaza to maximize pedestrian comfort. The towers twist as they rise, allowing afternoon sunlight to flood the courtyard, and are carefully positioned to block the prevailing winter wind and shield people from the noise of the surrounding streets.

Each of the four towers houses a unique function: office, hotel, rental apartments and condominiums. This diversity of use will help to ensure the public spaces stay more active beyond the workday, establishing a broader market for retailers, increasing sidewalk activity and improving the feeling of safety. A density of 288 hotel suites, 325 residences, and up to 1,500 office workers on the site every day will begin to establish a critical mass of population.

To design a public space that makes people linger, the edges of the site must be considered carefully. Like nervous boys hugging the gym walls at a school dance, we instinctively find comfort at the perimeter of a space. The edges that define True North Square are designed to welcome pedestrians, with high, fully transparent glass walls that allow views from the plaza, through interior spaces and to the streets on the other side. 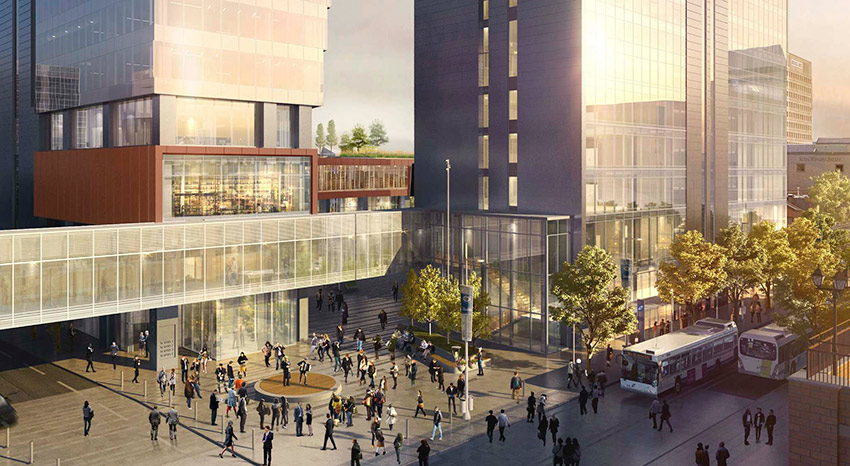 Façades will be porous, with numerous entrances that invite people to move freely between inside and out. Interior spaces and the outdoor plaza will share similar plantings, materials and colour palettes, to break down the edges and further establish a seamless pedestrian flow between each.

Ground-floor uses have been carefully choreographed to attract people to the site and inspire pedestrian activity along the sidewalks and in the plaza. A glass skywalk connects all four buildings, and is designed to have direct, easily identifiable public access to the sidewalk. The apartment tower along Graham Avenue will have retail units at the skywalk and sidewalk levels housing boutique shops and restaurants.

The curved south building will be home to a unique 30,000-square-foot cutting-edge food hall experience, spread over two interconnected floors.

The market will be an important amenity for downtown living and an attraction across the city. It will house a locally focused, chef-driven market, artisanal food vendors, and specialty grocery and retail concepts. Seating will spill into the plaza and out from the second floor onto a sun-drenched outdoor patio, connected back to the main plaza by a terraced seating amphitheatre that overlooks the site.

To ensure buildings don’t turn their back on the surrounding sidewalks, entrances will be located on both the street and plaza sides. Smaller, outward facing plazas at each of the northern corners will be important spots for sidewalk patios and other functions that extend the activity of the square into rest of downtown. Graham Avenue, from the arena to True North Square, will be raised to the level of the sidewalk, helping to calm the speed of bus traffic and create a seamless pedestrian flow.

The design pays special attention to creating a layered experience that breaks the large site down to a pedestrian scale. The buildings sit on a four-storey podium, with active, landscaped rooftops, that visually enclose the space and create an intimacy at eye level. Vegetation, granite paving, a water feature and sculptural wood seating elements are all used to define smaller, more human-scale spaces within the large plaza.

True North Square was a rare opportunity to design a major urban public space all at once. It attempts to reconcile the difficult challenge of being a place for thousands of people when hosting major events, while maintaining the intimacy and welcoming character that will make it an active urban plaza every day.

If all the design ingredients work together successfully, it will demonstrate the value of pedestrian-first design and bring a dynamic new energy to downtown Winnipeg, even when the Jets are not in the playoffs.
Brent Bellamy is senior design architect for Number Ten Architectural Group.