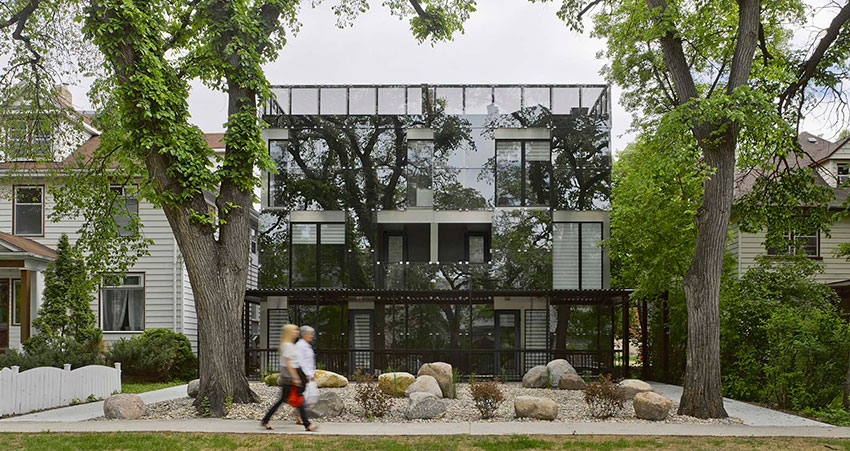 The idea of increased neighbourhood density is something that makes people instinctively recoil in opposition, but it is critical to the city’s long-term economic, social and environmental sustainability.

This formula works for all infrastructure and services, including sewer, water, snow clearing, garbage collection and emergency services. Our pothole-covered roads and stretched civic budgets are the result of a low-density city, growing more than twice as fast in area as it is in population.

Winnipeg’s mature neighbourhoods generally have 20 to 30 per cent fewer people living in them today than in the 1970s, due largely to average household sizes dropping from 3½ people to 2½. This decline means that while infrastructure such as roads, schools, community clubs, arenas, pools and libraries is serving a much smaller population than it was built for in the central city, we are at the same time having to build infrastructure for new outer neighbourhoods. An important benefit of infill growth is that it uses more existing infrastructure and reduces this need to build new.

Opponents of infill often point to the fact existing infrastructure also needs to be maintained or replaced, such as the combined sewer lines in older neighbourhoods. This is true; infill is not free, but the fewer sewer lines we can build today, the less it will cost our children to replace them in the future.

As Winnipeg embarks on development of its residential infill strategy, the city of Edmonton should provide valuable inspiration and insight. In 2014, Edmonton’s Infill Roadmap was released, cited as a work plan to advance infill. Possibly the most valuable lesson for Winnipeg is that Edmonton approached its strategy with the fundamental premise that infill is necessary, and instead of appeasing community resistance by implementing barriers that limit change, the road map looks for ideas to reduce public opposition. The plan’s success has begun to shift the conversation from "should" infill happen to "when, where and how" it will happen.

Edmonton’s Infill Roadmap began with dedicated political buy-in from the mayor and much of council, who navigated the dialogue through public opposition and media criticism. Financial resources and manpower were dedicated to the file, and partnerships were built with community and industry leaders to broaden public conversation.

The road map lays out 23 action items, the vast majority of which focus on communication, consultation and dialogue among developers, politicians, planners and the general public. The communications strategy includes a user-friendly website with short videos and clear infographics, providing easy access to neighbourhood plans, events and development information.

Clear and understandable signage is posted for variance applications, workshops are offered, and industry and community focus groups have been created. An infill compliance team was established to perform routine inspections of construction sites, ensuring they are kept clean and bylaws, such as tree protection, fencing and noise limitations, are respected.

Instead of implementing design guidelines mandating new houses look like they were built in 1920, modern design and innovation is encouraged through public presentations and an annual city-run design competition to showcase innovation and celebrate good modern design in mature neighbourhoods.

To complement communication strategies, the infill road map implements a series of regulatory policies to promote development. Reduced red tape and faster approval processes are in place, parking requirements were eliminated for laneway housing and secondary suites (a significant impediment to their development in Winnipeg), more flexible zoning regulations are being tested and lot splitting to a minimum of 25 feet is allowed.

In 2014, Edmonton’s Infill Roadmap set an ambitious goal of having 25 per cent of all new development occur as infill in mature neighbourhoods, more than double what Winnipeg typically sees. It has almost reached this goal. Setting a similar target of returning to 1970s density in mature neighbourhoods could be an effective goal for Winnipeg’s infill strategy.

Edmonton’s experience is a model for other cities. Fear of change is slowly being replaced with understanding of the long-term benefits of higher-density growth and acceptance that neighbourhood character and demographics can evolve to meet the needs of a modern city without detriment to quality of life.

Lot splitting and the acceptance of skinny houses, row houses and other infill types mean the growing population of seniors can downsize and stay in their own neighbourhoods. It allows young families and more socially diverse populations access to neighbourhoods they would traditionally be priced out of.

Winnipeg’s residential infill strategy is a valuable initiative, but it will fall short without public support or political champions. The city is currently undertaking a comprehensive review of Winnipeg Transit service, the OurWinnipeg plan and the second phase of impact fees. This presents a unique opportunity to dovetail an infill strategy with these other policies to set Winnipeg on a progressive development path for the future.