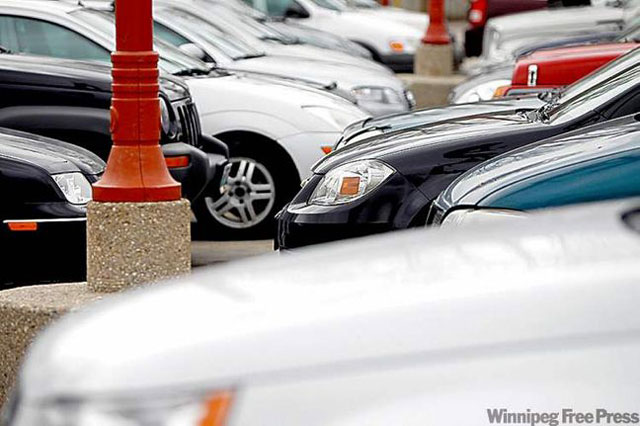 'Our Golden Business Boy will watch the North End die, and sing I love this town, then let his arcing wrecking ball proclaim, I hate Winnipeg'

As this line from the Weakerthans song One Great City candidly expresses, Winnipeg's long history of building demolition to make way for open parking lots has left our downtown resembling the toothless grin of hockey Hall of Famer Bobby Clarke.

Winnipeg is home to some of the largest urban parking lots in Canada. These inhospitable asphalt deserts create pedestrian dead zones that fragment the city centre. A low downtown residential population and years of declining transit ridership have resulted in high demand for parking from 70, 000 daily commuters. Optimistically designed for "Chicago of the North," it has historically been difficult to maintain density in our oversized city centre.

Many recent downtown developments seek to provide the same drive up and park convenience that the suburbs offer. While it is unlikely the downtown will ever out-suburb the suburbs, a clean, safe, walkable and interesting urban experience will attract people because it offers something different than what can be found at Kenaston and McGillivray. Downtown surface parking lots dilute all of these desirable characteristics.

The Albert Street Business Block and the Grain Exchange Annex on Lombard are recent examples of buildings approved for replacement by asphalt parking lots. In each case, the argument was made that the redevelopment of adjacent sites could not happen successfully without the drive-up convenience of adjoining surface parking. Their status as protected heritage buildings in the Exchange District was not enough to prevent approval for demolition by city council with the support of Heritage Winnipeg. A reminder of the consequences of these decisions can be seen at Canada's most famous intersection where the once proud McIntyre Block made way for a half-acre gravel parking lot that has stood in its place for two decades.

Winnipeg has had little success in developing a broad parking strategy that goes beyond accommodating traffic demand and identifies ways in which parking might help achieve other goals for the downtown. The car is not the enemy, nor is the elimination of cars the solution. Successful cities manage their parking requirements with centralized parking structures that provide safety and convenience while maintaining a cohesive urban form.

The issue is compounded by a regressive tax system that rewards property owners for demolishing buildings to make way for surface parking. When a building is removed, the resulting empty lot has a lower assessed value, resulting in a reduction in property taxes. The rumour of the Windsor Hotel's demolition was an example of this incentive at work.

How do we turn these blights on our downtown into opportunities that will allow it to flourish? Forward-thinking cities have begun to respond to this issue by introducing special taxes on surface parking lots. In Montreal, a new parking tax implemented in January charges property owners up to $400 per stall and is expected to contribute $20 million to city coffers each year. The hope is that higher parking costs will encourage the use of alternate transportation, promote the construction of higher-density parking structures and make building redevelopment a more attractive economic solution than demolition.

The increased tax revenue from a similar approach in Winnipeg could be directed into a financial incentive program that focuses on the redevelopment of open lots, reinvesting the taxes directly back into the economy while breathing new life into downtown.

A progressive taxation strategy coupled with a focused downtown development plan that uses zoning bylaws to establish parkade design standards and aggressively regulates the creation of new surface parking lots could be powerful tools in transforming the city centre into a vibrant and liveable neighbourhood.

Developing surface parking lots has a snowball effect on a city's prosperity. Increased density and improved urban quality is a catalyst for residential growth. This in turn improves the perception of safety and provides support for new amenities and commercial activity. The Waterfront Drive development, the new TIFF program to support downtown residential construction and the first leg of a rapid transit system are strong government lead initiatives that will reduce the demand for parking. By building on this momentum through creative leadership that prioritizes redeveloping these empty spaces we can transform our downtown's toothless grin into a million-dollar smile.

Republished from the Winnipeg Free Press print edition May 10, 2010 B5