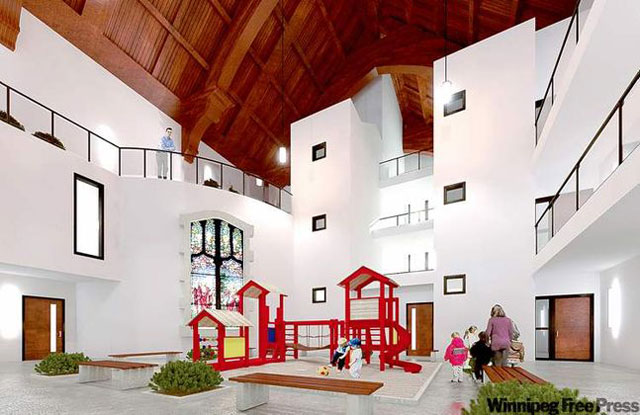 It may not be as simple as throwing a building into a giant blue box and dragging it to the curb, but with construction costs rising and sustainable design growing in importance, the practice of recycling buildings has become a significant development trend around the world.

All cities are filled with buildings that have outlived their original purpose. As an alternative to demolition, these structures are more often being looked at as a 'mine' of raw materials for new development. The recycling of buildings can be as simple as preserving specific components and reusing them in new construction. An excellent example of this is the historic facades that were maintained as part of Red River College's downtown campus.

An even more extensive recycling strategy known as 'adaptive reuse' focuses on maintaining the structure or basic fabric of the building and repurposing its function.

This approach to development often results in unique projects that effectively reduce the amount of new materials that are needed for construction, which can have economic, environmental and social benefits to developers and the community.

Nearly 70 per cent of the energy used during a building's lifetime comes from operations (lighting, heating, cooling), while the remaining third is used for its initial construction. This is referred to as its 'embodied energy.'

Simply described, the energy used to extract, process and manufacture materials, transport them to the site and assemble them into a new building is symbolically stored within the finished structure. As long as those materials stand in place, they are a repository of that energy. It is estimated a typical five-storey office building holds the equivalent of 2.5 million litres of gasoline in embodied energy. When that building is demolished, the energy it took to build it is lost.

When one considers the demolition of that building creates four million kilograms of landfill waste and construction of a similar new building releases the same amount of carbon into the atmosphere as driving a car the circumference of the Earth 125 times, the full impact of demolition is revealed. The environmental benefit to recycling buildings is bolstered by the considerable economic advantages that can be realized. With the value of construction tripling in the last 10 years, the reduction of labour and new materials in a repurposed building can result in substantial savings. Maintaining the structural system alone can return as much as 25 per cent of the overall cost.

Donald Trump once explained it in simple terms; 'I've always found that it's cheaper to start with an existing building. A lot of it is already done -- you already have your structure -- so that's why it's much cheaper.'

Generally, this is considered a long-term approach, but occasionally the primary use can be short-lived, as demonstrated at the Vancouver Olympics where several buildings were designed to be repurposed after the Games were complete. The dramatic speedskating oval is now a community recreation centre and the curling venue was transformed into a library and swimming pool.

Other examples around the world are demonstrating adaptive reuse can produce beautiful, creative and socially responsible buildings. In Copenhagen, a concrete grain silo was recently transformed into a spectacular condominium building. In London, an old power station has found new life as the dramatic Tate Modern Gallery, the most visited tourist attraction in the city.

In Winnipeg, a wonderfully innovative proposal to redefine St. Matthew's Anglican Church in the West End serves as an example of how, with some imagination, adaptive reuse can bring new life and purpose to an existing building while maintaining its social place in the community as a neighbourhood focal point. With a dwindling congregation, the church has decided the large volume under its beautiful wood ceiling would best serve its community as new affordable housing.

Friesen Tokar Architects have developed a clever solution that dramatically inserts a modern, four-storey apartment building inside the shell of the church. Twenty-five residential units and a smaller worship area for the congregation are focused around a grand internal courtyard that will function as a social space for the residents, creating one of the most unique living experiences in the city. The character of this could not have been replicated with all-new construction.

As Winnipeg's churches, fire halls, warehouses and office buildings approach the end of their functional lives, this innovative project will hopefully inspire other creative solutions as an alternative to demolition. The recycling of buildings through adaptive reuse can realize significant economic benefit for property owners, social benefit for communities and environmental benefit for the world in which we live.

Republished from the Winnipeg Free Press print edition March 14, 2011 B5