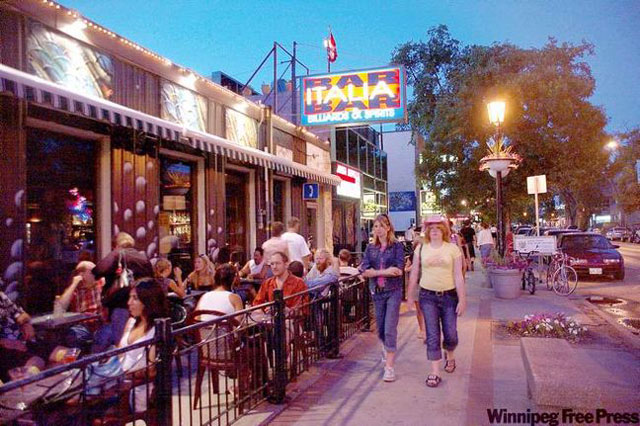 As another long winter fades into memory, the temperatures have begun to rise and leaves are starting to appear on the trees. A new season is finally upon us. For many, it's simply known as spring. For others, the colourful umbrellas popping open in front of restaurants across the city are a welcome sign patio season has finally returned.

The cornerstone of Winnipeg's patio culture is, of course, Corydon Avenue, which has blossomed in recent years to become one of Winnipeg's few vibrant pedestrian areas. On a warm June evening, the sidewalks overflow with activity as people enjoy a trademark gelato, do some shopping or simply spend time watching the crowds. It is an urban experience that at times is comparable to that found on streets like Robson in Vancouver or Whyte Avenue in Edmonton.

Much of Corydon's success can be attributed to a layout and physical form that shares many common characteristics with some of the best pedestrian streets in North America.

The key physical qualities of a great street like Corydon work together to create a comfortable pedestrian experience along the sidewalk. The most fundamental of these design attributes is a continuous street edge defined by buildings constructed right up to the sidewalk. This configuration provides a sense of enclosure and promotes an interaction between pedestrians and the adjacent buildings. Ground-floor transparency increases this visual dialogue by blurring the definition between interior and exterior space. Buildings constructed to the sidewalk provide environmental shelter while confining the visual expanse of the street, which creates intimacy, slows vehicular traffic and improves the perception of safety.

The low-rise buildings of Corydon Avenue allow sunlight to reach the sidewalk through the elm tree canopy and their human scale results in short distances between buildings. This offers pedestrians an ever-changing visual experience while the colourful and finely textured facades animate the physical environment, enhancing pedestrian interest.

All of these attributes come together on Corydon, as they do on most great streets, to create a strong sense of place, inspiring an emotional attachment in the community.

The unique conditions that exist on Corydon and its growing popularity as a commercial destination make it particularly sensitive to the pressures of new development.

Examples of incompatible design affecting the special character of Corydon can be seen with recent additions to the street that employ a suburban strip-mall configuration with single-storey buildings set back from the sidewalk behind two rows of parking. The result has been a significant erosion of the continuous street edge and a diminished urban character and pedestrian experience along Corydon.

The shops that occupy these buildings were likely attracted to the area because of its vibrancy and sidewalk activity, yet in an effort to gain a handful of parking stalls, these buildings are creating pedestrian dead zones that discourage that all-important foot traffic. These types of developments compromise the urban character of the neighbourhood and in some cases, fail to capitalize on opportunities to establish strong focal points at key intersections.

Recognizing the importance of encouraging compatible development in sensitive urban areas like Corydon, the City of Winnipeg has begun the process of developing a neighbourhood plan to define a vision for the growth and evolution of the area. With public design workshops being held this past week, a community-planning committee will work over the next year to establish the Corydon-Osborne Neighbourhood Plan, the first such guidelines to come out of the city's new Our Winnipeg municipal development document.

Great streets like Corydon grow organically over time and are rarely the result of regulatory planning decisions. Establishing clear design guidelines, however, that build on the existing successful attributes of the area could be a significant tool in protecting the community from further inappropriate development, allowing it to direct new projects in a more nuanced manner than simple zoning bylaws currently allow.

The ultimate success of this or any neighbourhood plan hinges on receiving full support from all levels of the community, from residents, developers and most importantly, city hall. Design guidelines are only as strong as the will to enforce them.

Past experience has demonstrated without a dedicated commitment to the principles of a neighbourhood plan, conflicting goals can often result in development that is allowed to deviate or even be exempt from the planning bylaws.

The Corydon area, like so many of Winnipeg's unique neighbourhoods, has the foundation of something extraordinary. Commitment toward a shared vision for the community that builds on its special character and discourages incongruent development will allow the area to realize its abundant potential. A successful Corydon-Osborne Neighbourhood Plan can become a blueprint to inspire other communities in the city to take control of their own built environment, allowing them to flourish as they evolve.

Republished from the Winnipeg Free Press print edition May 16, 2011 B5