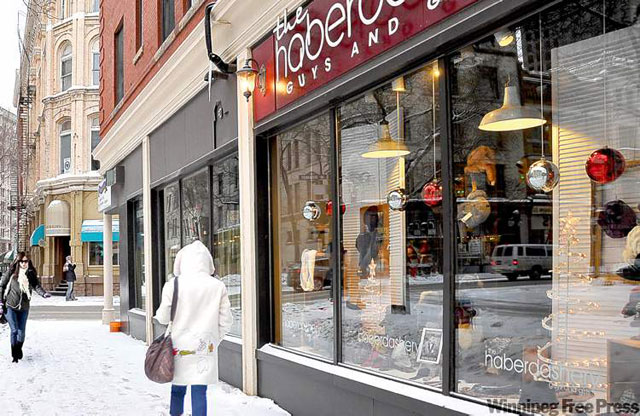 Christmas 1949: As the clanging bells of passing streetcars fill the air, Winnipeggers with arms weighed down by shopping bags struggle for space on the busy sidewalks of Portage Avenue. The streets glow with coloured light, the gingerbread city hall sparkles in the distance. Children watch as mechanical figurines bring the Eaton's windows to life.

Christmas 1959: As festive music chimes down from above, encouraging shoppers to spend, a new Christmas tradition is born as Winnipeggers stroll on covered sidewalks past the manicured courtyards of Polo Park, the city's first shopping centre.

Christmas 1979: With long lines of children eagerly awaiting their turn with Santa, a different Christmas carol playing in every store, the warm corridors of the regional mall has become the backdrop for Winnipeg's Christmas experience.

Christmas 1999: As 'big box' power centres proliferate, the familiar holiday scene becomes a search for parking along an endless row of cars, braving harsh winter winds while scrambling between stores across a sea of treeless, ice-covered asphalt.

Christmas 2019: With children playing tag in the main square or warming beside the outdoor firepit, parents wander the sidewalks along the recreated downtown streetscape of a new "lifestyle retail centre," as if transported to an urban setting from decades past.

A timeline of the modern shopping experience and the character of retail architecture is a giant circle that is beginning to close in on itself. What was old is becoming new again.

As cities began to suburbanize after the Second World War, retail shifted away from the city centre and towards the convenience of the enclosed regional mall. As the automobile took root in modern society, commercial architecture changed to accommodate this cultural shift. Urban mixed-use buildings gave way to million-square-foot dedicated retail malls with large parking lots located on highways with easy access.

As offshore manufacturing and high volume sales allowed big box stores to flourish, the architecture once again shifted. Retail buildings became a reflection of the low-margin product that they were selling. With standardized branding and low cost, high-speed construction being the driving factors, the power centres that sprang up across North America featured banal architecture with a cookie-cutter aesthetic and no social or physical connection to the surrounding community. The architecture responded more to the ability of having its sign visible from the highway than it did issues of human scale or pedestrian comfort.

In direct response to the dramatic shift that "big boxes" have had on the social shopping experience, "lifestyle centres" have now become the latest retail trend in North America. These developments turn away from the hostile surroundings of the typical power centre and focus on the consumer experience with higher quality architecture and a more stimulating pedestrian environment.

This trend is only beginning to enter the Canadian retail market, but it has become a successful model in the United States, where over the past three years almost twice as many lifestyle centres as regional malls have been constructed.

With names such as Towne Centre at Cedar Lodge and Streets of West Chester, lifestyle centres typically attempt to establish a nostalgic connection by recreating the traditional urban shopping experience in a suburban location. Retail units appear as individual buildings positioned along open air, pedestrian streets that mimic those of a city centre. Often targeting a specific retail segment or consumer demographic, most of these developments incorporate a mixture of uses such as condominiums, offices, theatres, restaurants and public gathering space that work together to create a vibrancy and sense of community not found at a typical big-box development.

As this new retail concept inevitably begins to invade Canada, there is an opportunity for existing urban business districts to reposition themselves as a type of lifestyle centre by following the successful principles of that model.

While the downtown will never be able to compete with high-volume, low-overhead big box developments, if lifestyle centres begin to shift the retail culture away from this model and towards one that places an increased value on the social shopping experience, neighbourhoods with unique architectural character such as Portage Avenue, the Exchange District or Osborne Village might be able to coexist and even flourish by implementing some of the concepts that make these centres appealing.

By uniting neighbourhood retailers into a single marketing entity and formulating cohesive branding strategies that target specific and unique retail niche markets, these areas might find a renewed appeal to a demographic of lifestyle centre shoppers.

Preserving and promoting the unique architectural character of these neighbourhoods while enhancing the pedestrian environment, increasing residential and commercial density and establishing effective neighbourhood parking strategies might allow Winnipeg's urban retail areas, unified under a collective marketing strategy, to capitalize on a cultural shift in the suburban retail market, returning part of the Christmas shopping tradition to the city centre.

Republished from the Winnipeg Free Press print edition December 20, 2010 B6