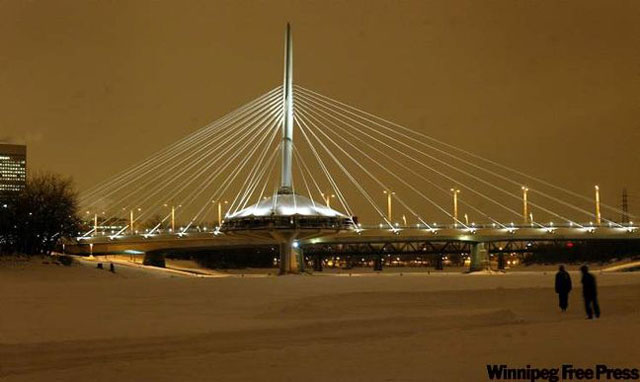 The stars of the romantic comedy Sex and the City spent six seasons searching for love. Relationships came and went, Big, Aidan and the Russian, but the love affair that remained constant was the one they had with their city. Their emotional connection to the vibrancy, character and style of New York was the show's consistent thread.

Marking the end of the 2010 Cultural Capital celebrations, the Winnipeg Arts Council invited former Vancouver senior community planner Larry Beasley to the My City is Still Breathing Symposium to discuss how this type of urban love affair can be a defining factor in the image, physical expression and economy of a city.

Beasley described that since the Second World War, urban planning in cities like Winnipeg has been primarily an exercise in vehicle management, trading the human experience for the conveniences of modern life.

While urban design has focused on the engineering of movement, it has ignored the issues of beauty, social engagement and livability that inspire emotional connections to the city. Who could be in love with the oceans of asphalt and the concrete canyons of Pembina Highway?

Beasley believes that with today's fluid movement of people and capital, an urban competition to attract growth and investment is developing. The winners of this competition will not be the cities that manage their traffic most efficiently, but those that inspire an emotional urban relationship with its citizens and visitors.

The great cities of the future will be the ones that successfully reintroduce the human spirit into their urban environment. Cities that invest in creative architecture, public art, green space and the urban streetscape while promoting vibrancy through density and mixed-use development will be the ones that rekindle an urban love affair with its people. The modern transient economy will no longer settle for inhumane solutions to urban design.

Beasley maintains when people fall in love with their city, a snowball effect occurs.

The typical public malaise for issues of design quality fade away as people take greater pride and interest in their built environment. Neighbourhood design guidelines and review committees form as citizens re-engage in the dialogue of making their city a better place.

No longer is development accepted blindly, but scrutinized for its architectural quality and neighbourhood appropriateness. Architects and developers are forced to consider issues beyond their individual buildings and find solutions that respond appropriately to the public needs of the community.

Ask any Winnipegger which street they love most. The answer will probably not be Regent or Kenaston but more likely Broadway, Corydon or Wellington Crescent.

These streets possess the character and identity that evokes a personal connection to place. This emotional response can be a design objective for all areas of development, from new suburbs to the restoration of core-area neighbourhoods.

Our young people do not flock to cities like Vancouver looking for bigger roads and better parking. They are searching for a city to be in love with. Jogging along the sea wall, shopping on Robson or taking the Sky Train to work, are the types of experiences they are seeking and we must provide in order to compete.

Over the years, Winnipeg has been a difficult place to love.

Our civic leadership has generally been reactive to short-term gain, instead of working toward a cohesive vision for our city.

Our architecture has often met only the lowest standards of quality in materiality, composition and contextual relationship. We have long been content with development for development's sake and have often ignored issues of beauty, style and personal engagement in the design of our communities.

Allowing cherished historic buildings to be demolished, the proliferation of windswept parking lots and the complete banishment of people from the corner of Portage and Main are all examples of this lack of consideration for the human experience in our urban planning. It is difficult to fall in love with those concrete barriers.

The results of incorporating elegance and beauty into what could have been a pragmatic piece of infrastructure can be seen with Esplanade Riel. When under construction, it was widely criticized as a needless extravagance, but the emotional connection we have to it today has established it as a beloved civic icon.

Larry Beasley has challenged us to follow the lead of projects like this, to look beyond zoning and transportation patterns and to view our urban design through the lens of human experience. By constructing places from the downtown core to the farthest suburbs that are beautiful, joyful and capable of inspiring an emotional response, we will reignite our civic passion for this city.

By promoting inspirational architecture, vibrant public spaces that foster social engagement, as well as efficient transportation systems, we will begin to see a social, economic and physical transformation of our city while revealing the true power of an urban love affair.

Republished from the Winnipeg Free Press print edition February 22, 2011 B4