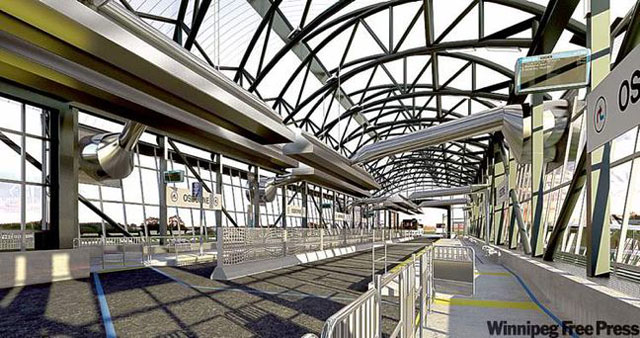 As the cultural and economic hub of a large region, Winnipeg's urban challenges are significantly affected by a number of federal government initiatives that have yet to find their place in the current election campaign.

Federal support for public transit initiatives has long been an important issue in Canada's larger cities. With our first rapid transit line sitting half-finished, the resolution of the debate over its eventual form and the level of commitment that we give to it, will have a significant impact on our city's urban structure for decades to come.

Environmental sustainability, infrastructure maintenance, traffic reduction, the control of urban sprawl and the stimulation of infill growth through transit-oriented development are all key issues that a comprehensive public transportation strategy can address. With costs too great to be borne by the municipal government alone, federal support for this initiative will be a fundamental component in the implementation of an efficient transit system that effectively responds to these civic challenges.

With immigration beginning to play an increasingly important role in Winnipeg's economic and population growth, it, too, has become a key federal issue affecting the city's urban form. With nearly 10,000 international immigrants settling in the city last year, the introduction of this new demographic is beginning to have a significant impact on the character and vibrancy of our urban core. The development of small business in the form of ethnic shops and restaurants in the downtown and West End neighbourhoods is not only redefining the urban flavour of these areas, but is the genesis of a burgeoning economic revitalization.

A strong commitment from the federal government to a national affordable housing policy, tied to strategic local community planning initiatives will help these new citizens successfully integrate and flourish in our community while redefining and rejuvenating our city centre.

Federal support for the Canadian Heritage department is another policy issue that is often overlooked in election campaigns that can have significant consequences for Winnipeg's urban environment.

Our city's architectural character is defined by an unparalleled collection of heritage buildings. These structures have become a strong economic catalyst for downtown renewal. Federal commitment to the protection and revitalization of our historic city centre through creative tax incentives and strategic heritage grants will be a key factor in maintaining the momentum our downtown has realized over the past number of years.

This same federal department contributes funding to most of Winnipeg's celebrated artistic and cultural institutions. Many of the theatres, galleries and museums that form the cultural backbone of our downtown rely on funding from federal agencies. Differing priorities between governments can have a significant impact on these organizations and their physical presence in our community.

The list of urban issues that affect Winnipeg voters in this federal election is lengthy. Social programs that address the economic disparity between the core area and the suburbs, aboriginal housing and education as well as the realization of the full potential of the Kapyong Barracks as a dense, mixed-use, sustainable neighbourhood, are all federal government initiatives that have a significant influence on Winnipeg's future urban form.

Canada's continued growth and economic success will depend largely on the health and vitality of our cities and surrounding suburbs. It is not simply a question of increased funding, but one of political priorities. It is important that during this election campaign we engage in a dialogue that recognizes the consequences policy decisions at the federal level can have on the physical and economic vibrancy of all cities across this country.

Republished from the Winnipeg Free Press print edition April 25, 2011 B5