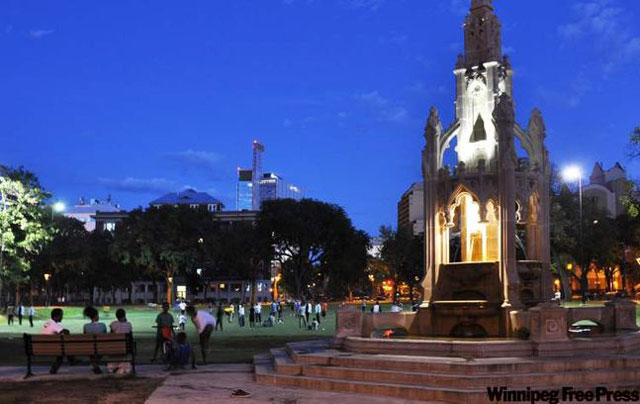 Thomas was already engaged to be remarried by this time, but was nearly bankrupt after a series of poor real estate investments. It would take him four years to raise the money and build what has been known to generations of Winnipeggers as the Waddell Fountain.

Stories such as this exemplify the role Central Park has played in Winnipeg's rich historic narrative. By the 1960s, however, the park's prominent place in the hearts of Winnipeggers had changed. The distinguished old mansions that lined the park were demolished to make way for highrise seniors and public housing in an effort to "modernize" the neighbourhood. This ill-conceived urban renewal strategy wiped away the existing social fabric of the community and accelerated its decay. Central Park would become a desolate and forlorn place with significant issues of crime and poverty. The Waddell Fountain, once a symbol of the neighbourhood's affluence, would sit dry and in pieces, an embodiment of the area's decline.

In 2008, the decision was made to reclaim Central Park as a symbol of hope and prosperity for the residents of what had become Winnipeg's most dense and ethnically diverse neighbourhood. One year ago this week, a redeveloped Central Park, designed by Scatliff Miller Murray Landscape Architects, was finally opened to the public.

The instant popularity of its unique collection of amenities, including an artificial turf pitch, an interactive waterpark, environmental play areas and a four-season sliding hill, has restored the park to its historic place as the social focal point of the community.

Rising above it all is a beautifully restored Waddell Fountain.

Defining the street edge on the north side of the park is an elegant new pavilion housing washrooms, change facilities and the waterpark's mechanical equipment. Designed by David Penner Architect, the small building's simple Modernist composition of concrete and glass creates a contrasting dialogue with the ornate stonework of the Waddell Fountain and a complementary one with the Modernist lines of the Hydro building that rises over the park from Portage Avenue.

The simple expression of Modernist buildings is often publicly criticized as sterile and austere, but this pavilion demonstrates that refined and sophisticated architecture can be appropriate even as the backdrop to a playful children's waterpark. Its distinguished design elevates the stature of the park, making it difficult to imagine any other style of building in its place.

The pavilion's transparent glass walls that expose the mechanical workings of the waterpark provide an educational opportunity while expressing a sense of openness and connection to the community. Its design moves away from the typical closed-box, maintenance-building aesthetic that often invites graffiti and vandalism.

Angled columns that support a canopy along the south side playfully allude to the legs of running children, while the canopy itself acts as a waterfall at the pool end, allowing park users to interact with the building in a unique way. The pavilion beautifully demonstrates that even small utilitarian buildings can be refined and engaging contributors to their surroundings.

The success of Central Park has been evident on recent steamy summer nights, as it provides the setting for an exotic image that most Winnipeggers would not recognize as their own city. Shadows from the bright lights cross each other in a blurred kaleidoscope of movement, as three different soccer games simultaneously ebb and flow across the pitch. The sound of a dozen languages fills the air as a guitarist plays to a small group on the steps of the fountain. The rhythmic beat of African music streams from a nearby apartment. Every generation fills every bench and every table. The new park forms the backdrop to a scene that celebrates the beating heart of a proud and diverse community.

It may only be coincidence, but according to Crimestat.ca, crime in the neighbourhood has decreased by 25 per cent since the opening of the redeveloped park. There can be little debate, however, that Central Park has injected a new spirit and vibrancy into its neighbourhood. A demonstration of the transformative capability of good design, it has quickly become an active public amenity that has redefined and re-engaged a community whose success is vital to the future of our city.

Republished from the Winnipeg Free Press print edition August 29, 2011 B5