2010: a year of civic progress - We didn't build any skyscrapers; we built smaller, better projects 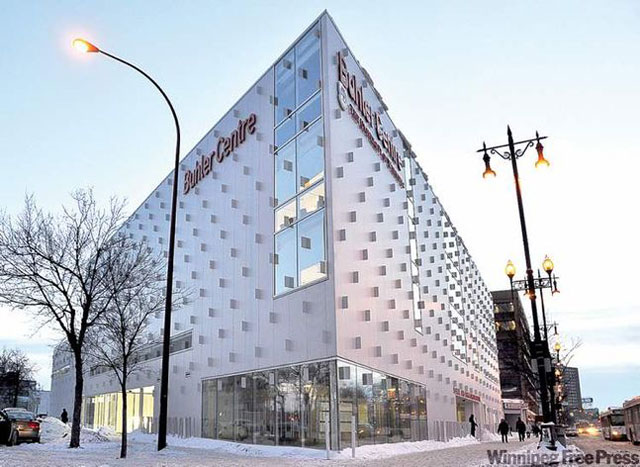 As the calendar turned to 2011, year-end reflections and "best of 2010" countdowns dominated the media. It has become a New Year's tradition to solve the difficult questions such as who had the better album, Kanye West or Arcade Fire, or was The King's Speech a better movie than Inception?

How then will 2010 be remembered in Winnipeg? Should we look back on its development as a countdown of highlights or should Mr. Blackwell put us on his worst dressed list?
Cube Winnipeg in the Exchange District

One indicator that is used to gauge a city's growth and development is the value of building permits issued each year. Winnipeg's total in 2010 (Q3) increased by 27 per cent over the year before and was twice what it was in 2005. At a time when much of the continent was mired in recession, this should be celebrated.

It is often lamented, however, that the evidence of this growth is not as easily identified as it is for our western neighbours, whose skylines are filled with cranes constructing gleaming glass towers. Even with several projects on hold, Edmonton, Calgary and Vancouver each had between five and 10 highrises under construction in 2010. The only crane on our horizon was at the site of the Canadian Museum for Human Rights.

While it would be easy to believe by this comparison that Winnipeg's urban development was lagging behind these other cities, Jane Jacobs, the most influential urban writer and activist of the past 50 years, might not have drawn that conclusion.

Jacobs argued in her iconic book, The Death and Life of Great American Cities, that healthy urban areas are dynamic organisms that depend on a diversity of building sizes, uses and ages to be successful. She rejected the type of 'clean slate' urban renewal strategies that saw the Trizec Building at Portage and Main wipe out an entire existing streetscape of 35 buildings for its construction. Instead, she promoted the idea that human scale buildings, sidewalks, parks and urban spaces function together as a natural ecosystem that lives and grows with the rhythms of the people who interact with them.

Skyscrapers and mega projects can look impressive in post cards but according to Jacobs, bigger isn't always better. Large scale redevelopment can lose its connection with the sidewalk, severing the naturally occurring neighbourhood development patterns and small scale economic networks that are critical to a healthy city.

Looking back on 2010, Winnipeg was fortunate to have a number of smaller projects under construction representing a wide range of uses that will enhance the unique urban experience that Jacobs celebrated.

The diverse list of projects under construction last year included the Plug in Gallery's new home on Portage Avenue, the expansion of the U of W and Red River College, boutique shops populating the Exchange District, the refurbishment of The Bay with its introduction of a successful Zellers outlet, a major athletics centre on Main Street and the transformation of Old Market Square and Central Park into active community green spaces.

While these projects represent a pattern of positive, organic development in the downtown, residential growth has long been identified as the most important component of a healthy urban centre. Jane Jacobs understood the role residential density plays in increasing pedestrian activity, safety and economic growth, saying 'You can't rely on bringing people downtown, you have to put them there'.

In this regard, Winnipeg again was fortunate in 2010 as the heritage neighbourhoods in our downtown were an active catalyst for strong residential growth. More than 500 new residential units were completed or began construction in and around the Exchange District last year, with eight historic buildings undergoing loft conversions. This number of units alone is equivalent to four or five 20-storey condominium towers going up in other cities.

In the downtown as a whole, 13 varied residential projects under construction in 2010, representing almost 1,000 units ranging from transitional housing to student dormitories, rental apartments and half-million-dollar condominiums, will increase the downtown population by more than 10 per cent when complete.

Last year's introduction of the innovative tax-increment financing (TIF) program has already spawned proposals for hundreds more residential units in 2011, including more development of the Exchange District as well as a 25-storey tower on Assiniboine Avenue.

In 2001 Jane Jacobs visited our city and mused that 'Winnipeg was remarkably urban'. Having passed away in 2006, if she were here today she would probably say that while we still face a number of challenges, with strong residential growth and several community enriching projects under construction, 2010 should be looked back on as a year in which Winnipeg progressed towards making its downtown a more successful urban neighbourhood.

Republished from the Winnipeg Free Press print edition January 31, 2011 B5