In 1959, the Palace Grand Theatre was saved from destruction by the Klondike Visitors Association and was donated to the former National Historic Parks branch of the Canadian government (presently Parks Canada), who began replication of the theatre in the early 1960s. In 2008, the Palace Grand Theatre was classified as a Federal Heritage Building because of its historical associations, and its architectural and environmental values. The theatre is now part of the Klondike National Historic Sites, which include many landmarks associated with the story of the Klondike Gold Rush (including the Dawson Historical Complex, the S.S. Keno sternwheeler, Dredge No.4, the Former Territorial Court House, and Bonanza Creek’s Discovery Claim). The sites reflect the social, economic and political features that shaped the Yukon region over the last century.

The present-day Palace Grand Theatre is an elegant three-storey wood structure with an impressive false front façade. It was re-constructed in 1962 as a nearly exact replica of the original 1899 Palace Grand Theatre (deemed ‘not restorable’ due to shifting foundations). This replica is identical to its predecessor with the exception of some interior elements and life safety improvements. The theatre is used seasonally (May through September) for rental and various Parks interpretative programs. It is left unheated during the winter months. 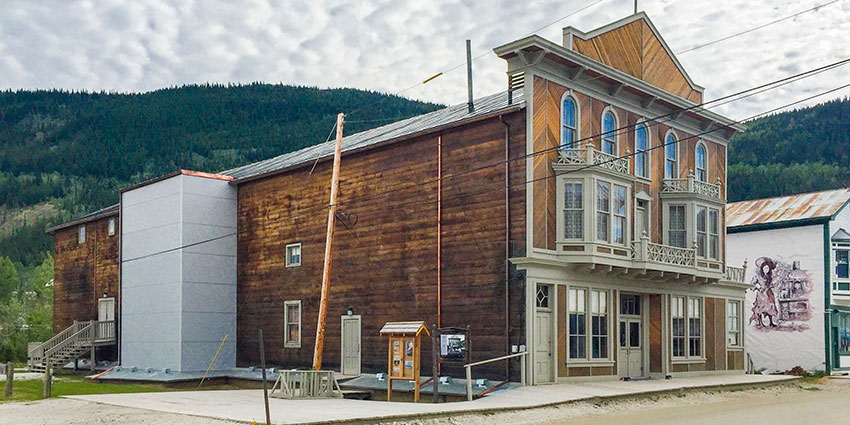 Number TEN was engaged by Parks Canada and Public Works and Government Services Canada in 2014 to undertake a total building evaluation.

The building systems (sprinkler, heating and ventilation) were identified to be reaching the end of their useful life. The building foundation moved with the seasonal freeze thaw cycles resulting in damage to the superstructure. In spring, leaks were known to occur at the flat roof areas of the mechanical room, and fire escapes. Inadequate insulation in the building caused ice damming in the spring and subsequent leakage in the building. Asbestos was present in exterior siding and floor insulation. The design team was engaged to provide a full set of documents addressing these issues.

As a leader in conservation of built heritage, Parks Canada ensured the work taking place at this important national historic site and federally designated heritage building adhered to strict guidelines and standards in order to maintain the commemorative integrity of the site. With the heritage features of this building fully protected during construction, the interior look of the building has remained unchanged to maintain its heritage value. The renovations included the building systems (sprinkler, heating and ventilation), building foundation upgrade, structural upgrade of 2nd floor mezzanine, increase building insulation, revision of floor and wall assemblies and fire separations, complete overhaul of mechanical and electrical systems, re-roofing, new exterior stairs, barrier free access ramp, new washrooms and mechanical room. The intent was to upgrade the building as unobtrusively as possible given its heritage status, while also providing solutions to the particularly difficult environmental conditions.

The major work was determining code requirements and equivalencies or alternates in relationship to the heritage structure. This included an alternate system for gravity smoke exhaust at the stage (Parks Canada did not want venting at the roof) with mechanical smoke exhaust, and the sprinkler system to be a dry sprinkler system with a nitrogen generator and chemical injection system. The work involved design team members including architect, mechanical, electrical and code consultants. The smoke detectors required by code were deemed to be a visual intrusion to the interior and a VESDA (very early warning aspirating smoke detection) system was utilized. This system consists of a central detection unit which draws air through a network of pipes to detect smoke particles. The sensor head is very small compared to a conventional smoke detector. The fire protection of the stage was originally to be a deluge sprinkler system. In working on the smoke exhaust for the stage and to reduce the amount of exhaust vents to the exterior, it was determined a traditional “fire curtain” separating the stage from the auditorium would reduce the air volume to be exhausted in a fire situation, lessening the exterior venting. The drawings and modeling required by architect, mechanical engineer and code consultant were used in determining the required design air volumes and assisted in determining appropriate solutions.

The theatre was closed for two years for critical infrastructure upgrades, and Parks Canada celebrated the return of the theatre to the community and a successful 2018 summer season with a gala event The evening featured a dreamlike encounter between silent film and live music, performed by the Problematic Orchestra.