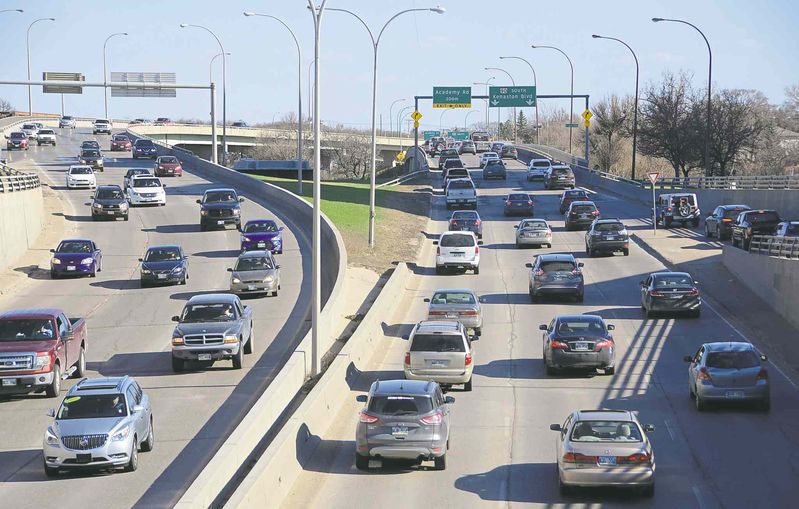 Ironically, the only spending generally not criticized for diverting money from road maintenance budgets are those announcing the construction of new roads that will eventually add to the volume of infrastructure needing to be maintained.

Recently, the city prioritized four road construction projects to be submitted for joint funding from the provincial and federal governments. Debate quickly escalated about which projects should be completed first -- but there was no debate over whether they should happen at all.

The four projects; rail underpasses on both Waverley and Marion streets, an extension of Chief Peguis Trail and the widening of Kenaston Boulevard, came with a staggering combined price tag of more than $1.2 billion. With design estimates becoming more detailed and construction costs rising over time, that number could nearly double.

Before we spend billions of dollars widening and building new roads in an attempt to increase vehicle capacity, lower commute times and reduce traffic congestion, we might first consider the experience of other cities that have attempted to do the same.

After decades of slicing freeways and large traffic corridors through urban areas, cities around the world have realized it is not possible to build their way out of traffic congestion. They have come to understand the idea increasing road capacity not only results in a sprawling, car-dependent city, but it does little to reduce gridlock in the long term. It often does the opposite. They have found no matter how often roads are expanded, they will eventually return to maximum capacity.

In economics, this principle is called induced demand. When the supply of a product increases, the price drops and in turn, demand grows. In the context of roads, when capacity is increased, congestion is reduced in the short term, which promotes an increase in vehicle use until it meets the available supply of road space, no matter how much more capacity was built.

There are many drivers of this phenomenon, often referred to as the law of congestion. The increased capacity of bigger roads will immediately reduce commute times, causing people to alter their driving patterns, either their route or time of travel, to take advantage of the higher capacity network. This increases traffic volumes on the new roads. The convenience of greater capacity can also cause people to change their mode of commute, reducing the use of public transportation or carpooling, again increasing the number of cars on larger roads, leading to a return to maximum traffic volumes at peak times.

Most importantly, larger roads are a significant contributor to urban sprawl. Greater vehicle capacity on new roads promotes growth in distant suburbs by reducing travel times over larger distances. As sprawling development occurs, traffic increases to fill the new capacity by creating longer trips that keep cars on the road for greater periods of time. Sprawling growth promotes a lifestyle that increasingly relies on the automobile, as farther distances make cycling and transit an ineffective transportation option.

An example of this effect can be seen in Winnipeg's Waverley West area. As the development has grown, larger roads and more infrastructure has been built to accommodate rising traffic levels. The faster commute times have spurred development to sprawl even farther out with more suburbs and growing bedroom communities beyond the Perimeter Highway. The result has been an increase in traffic volumes and driving distances to the point where there is now pressure to spend billions of dollars to once again increase capacity in response.

The proposed Kenaston and Waverley projects are a product of this demand. If the roads are enlarged, development will spread even farther out and the unwinnable, never-ending cycle will continue. The detrimental effects of this lower density, sprawling growth goes well beyond traffic congestion and is the cause of our rising taxes and lower civic services.

The law of congestion is a counterintuitive idea that is easy to dismiss, but the concept has gained acceptance in many cities that have successfully enacted policies to limit road expansion. Cities such as New York, San Francisco, Portland, Ore., Milwaukee and Seattle have all begun demolishing freeways, replacing them with smaller, more human-scale streets. They are finding the resulting traffic congestion is no worse than it was previously and in many cases, it is better. Smaller streets have been found to provide even greater capacity, as slower speeds allow a higher vehicle concentration on the roads.

A common lament is if only Winnipeg had freeways such as in American cities, all our traffic problems would be solved, yet the most intense traffic congestion most of us have ever experienced has been on one of those freeways in another city.

Lewis Mumford, a prominent American urban theorist, said in 1955, "People, it seems, find it hard to believe that the cure for congestion is not more facilities for congestion."

Six decades later, cities such as Vancouver are taking this idea to heart and redesigning their traffic systems in more progressive ways by prioritizing pedestrians, cyclists, public transit and smaller street systems. These choices are resulting in cities that are less dependent on cars, safer, healthier, more economically sustainable with less urban sprawl and more vibrant neighbourhoods.

Before we in Winnipeg spend billions of dollars on new road construction, we might look to the experience of larger, faster-growing cities, consider it may not be possible to build our way out of traffic congestion and ask ourselves whether bigger roads and sprawling suburbs create the type of city we want in the future.