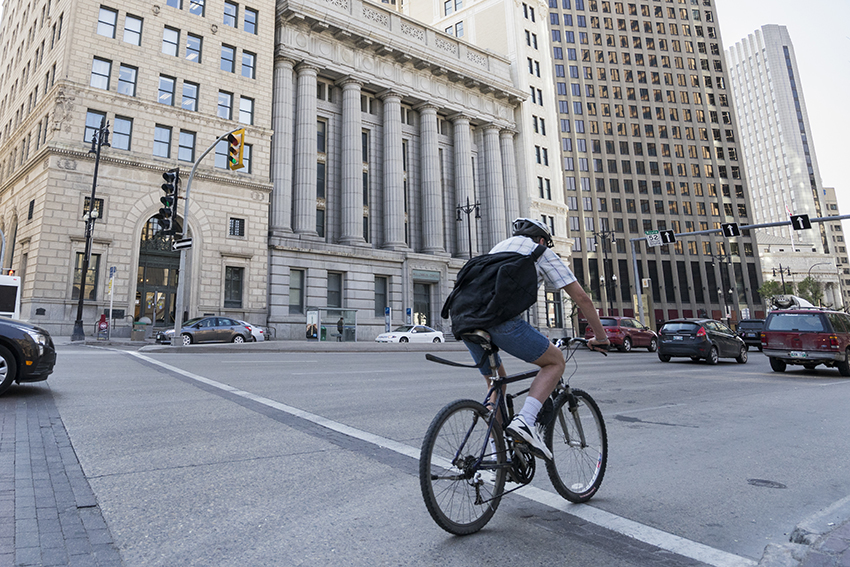 The city's sprawling suburbs are served by big-box stores floating in oceans of asphalt parking.

The shape of the city has changed and so have our shopping habits. In the late 1980s, Portage Place mall was constructed as a last-ditch effort to out suburb the suburbs, but it has struggled almost since the day it opened.

Even with downtown's large surface parking lots and 35,000 stalls, it is unlikely there will ever be enough parking to compete with the convenience of suburban shopping. Portage Place has demonstrated that even connected to a large, heated parkade, downtown retail struggles as a commuter destination. The perception remains, however, that urban restaurants, services and retailers must cater to drive-up customers to be successful.

This issue came into the spotlight two weeks ago as Winnipeg's new bike-and-pedestrian strategy was being presented to city council. Responding to the proposed plan, Coun. Russ Wyatt (Transcona) wrote a letter to downtown business owners, warning them 13 new protected bike lanes to be built over the next 20 years may lead to a loss of some of the city's 2,000 on-street parking stalls. While this is likely true, the notion the success of downtown retail is tied to the availability of parking is one that will likely have to change if businesses are to find long-term success.

Almost exclusively, North American cities with prosperous retail cores are those with a dense residential neighbourhood at their centre. One of the few proven models to establish urban commercial viability is to create an active, diverse, pedestrian-oriented neighbourhood that supports the shops as a local market and focuses on growing foot traffic above commuter vehicle traffic.

Understanding this and other benefits of a strong downtown population has led to a concentrated effort to attract new residents to Winnipeg's city centre over the last decade. Many excellent initiatives have found success, with 1,800 new residential units being built in that time and 1,650 more currently under construction or being planned. With 17,000 residents, there are more people living downtown today than ever. Despite these gains, almost all of those residential units has been built with government help, through residential development and heritage grants or tax-increment financing programs.

To maintain growth in the downtown, the economics of real estate development must be self-supporting. Lower demand means rental and condominium sale prices do not yet match higher construction costs, requiring government assistance to bridge the financial gap. To increase market demand and balance the development equation, the focus of urban renewal must not only concentrate on increasing the population, but on building a neighbourhood that offers the amenities that make urban living a unique and attractive option.

The fundamental quality of life incentive to attract urban residents is the ability to connect to amenities such as school or work, restaurants, grocery stores, shopping and services, without the use of a vehicle. Transforming downtown into a walkable city centre that focuses on the pedestrian and cyclist experience first is the most important investment Winnipeg can make to promote an urban lifestyle different from the suburbs. It is an important concept in the creation of a downtown community with a self-sustaining real estate market that will in turn support a prosperous central retail sector. 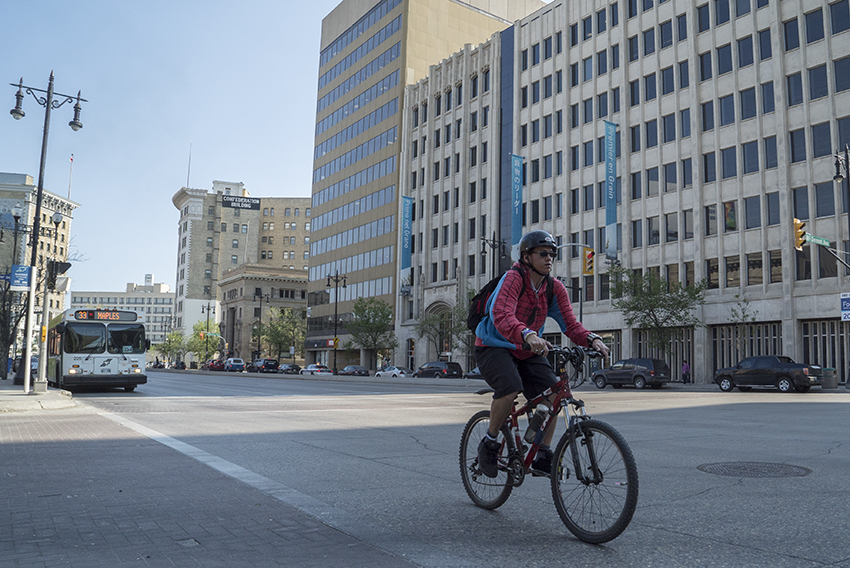 The bike-and-pedestrian strategy will directly respond to this idea by vastly improving Winnipeg's non-vehicular mobility downtown. It will build strong bridges between the islands of existing residential development in the city centre, creating a cohesive multi-modal circulation network that allows residents to easily access amenities across the core area. Few initiatives could be more transformational for the quality of urban living in Winnipeg than implementing a plan to prioritize the pedestrian and cycling experience.

The proposed bicycle network is based on a city-wide 'hub and spoke' concept. Almost 80 kilometres of protected bicycle lanes will establish a series of radial arteries along key corridors that connect the central city to a comprehensive set of neighbourhood greenways and off-street paths. The entire system comes with a projected cost similar to that of a single roadway project such as building an underpass on Waverley Street or the widening of Kenaston Boulevard. The vast network of protected bike lanes planned for downtown would cost only $7 million if implemented today.

Winnipeg is not alone in fearing the loss of on-street parking and its affect on downtown business. The debate happens in almost every city when bike-lane plans first emerge. Winnipeg has the advantage of being able to learn from those who have already implemented such plans. From Portland to Vancouver, Toronto, Seattle, Fort Worth, Texas, and Memphis, the economic impact has been studied over and over again. Each time, a similar conclusion is reached: Losing parking to bike lanes has little negative impact on local business and in many cases, improves it. Studies found cyclists spend more than drivers and visit more often. The addition of bike lanes to a street also has a calming effect on traffic, which attracts even more people. It is often found downtown streets with bike lanes become the most successful commercial corridors, commanding the highest property values.

After 60 years of designing a city overwhelmingly for the needs of the automobile, the progressive ideas in the bike-and-pedestrian strategy will finally begin to put people first. It is a visionary plan that, if implemented, would redefine the city and instantly make Winnipeg an active-transportation leader in North America. The plan will unify Winnipeg's large and disconnected city centre, improve the quality of life for downtown residents and be a strong catalyst in the establishment of a connected, self-sufficient urban community that is a permanent and local pedestrian market for the businesses that will inevitably lose the parking-convenience war against their suburban competition.

Republished from the Winnipeg Free Press print edition May 25, 2015 B4