Pedestrian Traffic at Portage and Main Would Invigorate All of Winnipeg 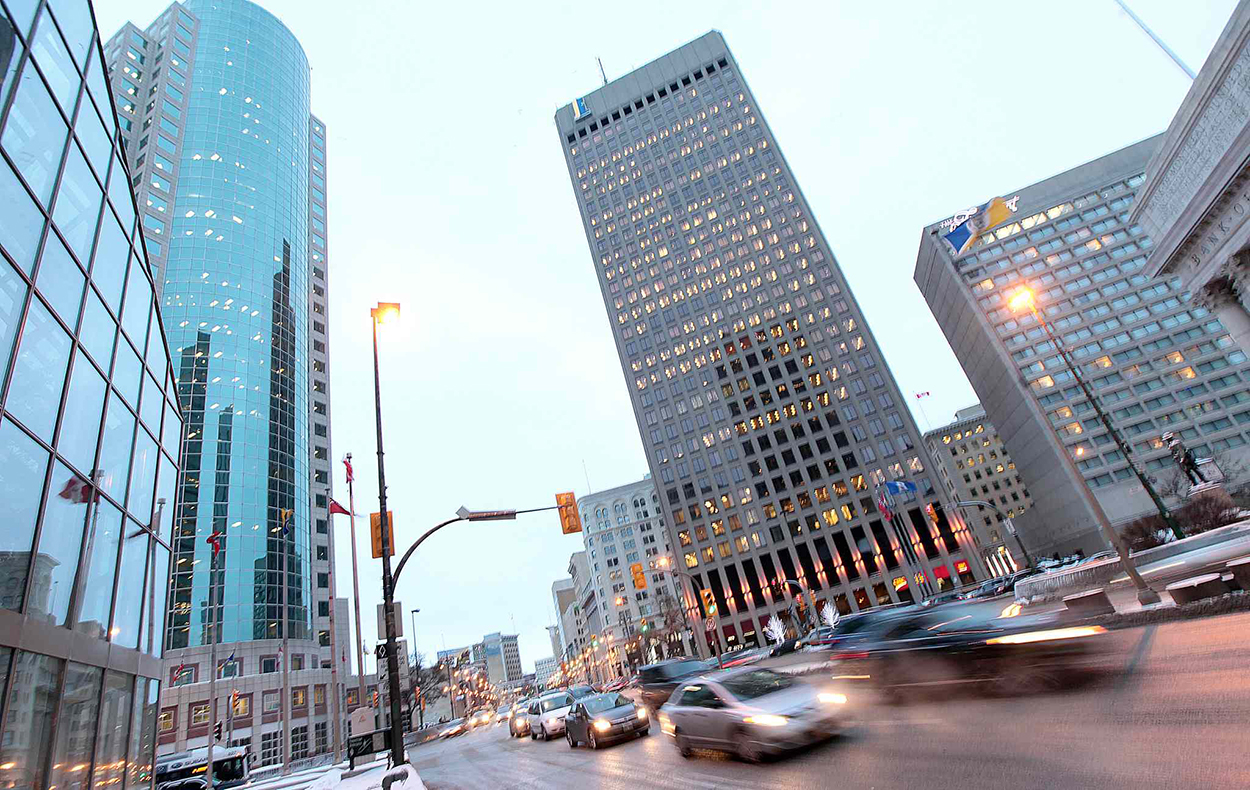 Nothing stirs the passions of Winnipeggers more than talking about traffic. Those emotions boiled over recently when the Downtown Winnipeg BIZ hosted, Imagine Portage and Main, a symposium to stimulate conversation about the future of our city’s once iconic intersection.

The event’s guest speaker was Tim Tompkins, president of the Times Square Alliance, a business improvement district that successfully navigated a public consultation process to transform the New York intersection from a seedy, car-dominated crossing into a safe, pedestrian destination and vibrant public space.

Judging by the response on social media, Internet forums, radio callin shows and newspaper comment sections, the challenge of convincing Winnipeggers to consider a similar evolution for their famous intersection will be even more daunting than persuading eight million New Yorkers.

To move the debate forward, the following paragraphs will identify the key concerns that arose through the symposium in opposition to reopening Portage and Main and provide a brief response from the proponents’ side.

❚ Opening Portage and Main is not a priority for Winnipeg right now.

The legal agreement to close the intersection ends in 2019. At that time the property owners have the legal authority to unilaterally enact another 40-year closure agreement. This timing is forcing the discussion to be a priority today. It would be irresponsible to make choices affecting the city that our great-grandchildren will live in, without a thorough dialogue of the long-term consequences of those decisions.

❚ Opening Portage and Main to pedestrians will cause severe traffic delays throughout downtown.

Portage and Main is a very important intersection for vehicular circulation, but it does not exist in a vacuum. The one-kilometre length of Portage Avenue from Memorial Boulevard to Main Street has eleven stoplights, each with pedestrian crossings. Cars are forced to stop and wait for pedestrians less than 100 metres from the intersection in each direction.

There are many options engineers have to ensure traffic flows consistently. As an example, the intersection may only be partially opened, or closed to pedestrians during peak rush hours.

Cities around the world, including Calgary, Toronto and even Saskatoon have implemented scramble corners at similar intersections. With this strategy, vehicles cycle through normally without pedestrians, then with all vehicles stopped, pedestrians cross in every direction. This sequence improves safety and congestion by eliminating the typical interaction between cars and people, particularly during left turns, adding less than one minute to each complete light cycle.

❚ Opening Portage and Main will be unsafe to pedestrians. The streets are too wide and there are too many cars.

People cross the many other intersections along Portage Avenue and Main Street every day. Traffic volumes through the crossing are the highest in downtown, but volumes at other large intersections such as Broadway and Main or Portage and Memorial are in a comparable range.

These intersections have similar street widths and experience very high numbers of pedestrian crossings daily. Safety doesn’t appear to be a concern at these locations and nobody has ever proposed building pedestrian tunnels under the streets.

❚ It is too cold and windy for people to cross the street at Portage and Main.

It is often cold and windy in Winnipeg, but it is also often very nice.

On average, the temperature reaches 10 C almost 200 days per year and is above freezing almost 250 days per year. Why would we design our city exclusively for the other 100 days? When living in a winter city, it would seem most appropriate to search for a balance that allows us to take advantage of every good day to its fullest. If the corner is opened to pedestrians, the option to go underground in the winter will still exist.

Opening the corner will also increase accessibility. What would be a simple 30-metre crosswalk, is today a labyrinth wheelchair journey on four elevators, across two ramps, through five sets of door openers and down three back corridors.

❚ Why would property owners agree to let pedestrians cross on the sidewalk when it will hurt business in the underground?

Pedestrians, not cars, create economic activity. Reinstating the intersection as a key pedestrian crossing may invite more people to the area at all hours of the day, likely expanding the retail market beyond the twohour lunch rush. By luring people to the corner and creating safer, more direct and obvious connections to the underground, property owners will likely see market growth both at the sidewalk level and in the underground by taking advantage of the other 22 hours per day.

It will be important to work together with property owners to find a solution that allows the underground to flourish by welcoming greater numbers of sidewalk pedestrians down into the mall, providing amenities for the entire downtown and not just the immediate lunch crowd.

❚ Taxpayers shouldn’t have to pay for opening Portage and Main.

In 2004, a full redevelopment of the corner into a grand public plaza was projected to cost $10 million.

Even with inflation, that cost pales in comparison to projects such as the $150-million Waverley Street underpass or the $375-million widening of Kenaston Boulevard. We rarely question these costs or demand a public referendum on their need and expense. We don’t ask IKEA or Costco to share in these construction costs. To be a truly progressive city, public investments for pedestrians, transit riders and cyclists should be considered as valuable as those for making cars go faster. 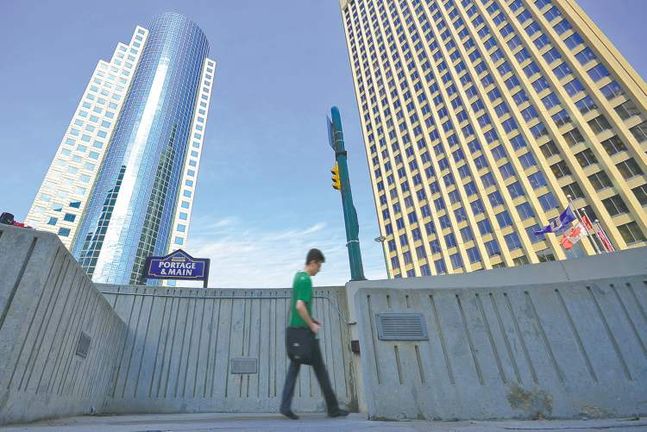 ❚ Allowing pedestrians to cross Portage and Main will not save downtown. The corner will not become an urban nirvana of restaurant patios and boutique shops.

Opening the intersection is not a silver-bullet solution for all of downtown’s challenges. No single project could be, but great cities are built by small changes that work together to improve urban quality over time.

Portage and Main is a small part of the puzzle to bring life and vibrancy back to our core.

For 80 years we have designed downtown with the priorities of a driver in a car instead of a pedestrian on the sidewalk. The city centre became something to get through as quickly as possible and was no longer thought of as a place to be.

There has been a gravel parking lot at Portage and Main for 45 years and it is so normal that many people reading this won’t even be able to picture it.

In most cities the blocks surrounding a signature intersection such as this, would be its most valuable real estate. In Winnipeg, they are filled with vacant lots and underperforming storefronts.

Despite the fact more than 10,000 workers inhabit the corner every day, the effect of pushing people below ground for 37 years has created a pedestrian dead zone around Portage and Main. It may be physically possible to get across the intersection underground, but without direct sight lines and easy access, a pedestrian divide has formed.

The physical disconnect of commercial space below ground reduces its ability to support retail on adjacent streets at the sidewalk level and instead of forming part of a downtown retail network, it acts as an island serving the offices above.

Bringing pedestrians back isn’t just about building sidewalk cafés in the Richardson Plaza.

Its greatest impact will be to re-establish the pedestrian connections between neighbourhoods that are currently severed by this divide. By healing the scar, the success of the Exchange District might be allowed to extend to struggling south Main Street, Portage Avenue might create new connections to The Forks and Waterfront Drive, making the oceans of surface parking in between more attractive to development.

With more people on the sidewalk, the perception of safety in the area will increase and create the pedestrian environment that makes urban living attractive, helping to establish a competitive downtown residential real estate market free from government subsidies.

Downtown is the economic engine of the city. It forms the image visitors have of us and the image we have of ourselves. To build a prosperous downtown, we must find a balance between cars and people.

With today’s mobile workforce and global economy, Winnipeg competes with other cities for investment, employment and growth. Every year we lose thousands of young people to other cities, looking for something other than the suburban car-oriented life. Cities that can establish a vibrant central core and offer dynamic urban lifestyle choices, will be the leaders of the future.

Portage and Main is an opportunity to transform what is effectively a freeway interchange into a special public place that celebrates the heart of our city, transforms our image and introduces a new urban energy to what has become a re-emerging city centre.