National housing strategy a way to change face of neighbourhoods

Prime Minister Justin Trudeau recently unveiled details of the federal government’s national housing strategy, a 10-year, $40-billion initiative that will look to collaborate with provinces and municipalities in developing programs that target homelessness and improve access to affordable housing for Canadians in need. 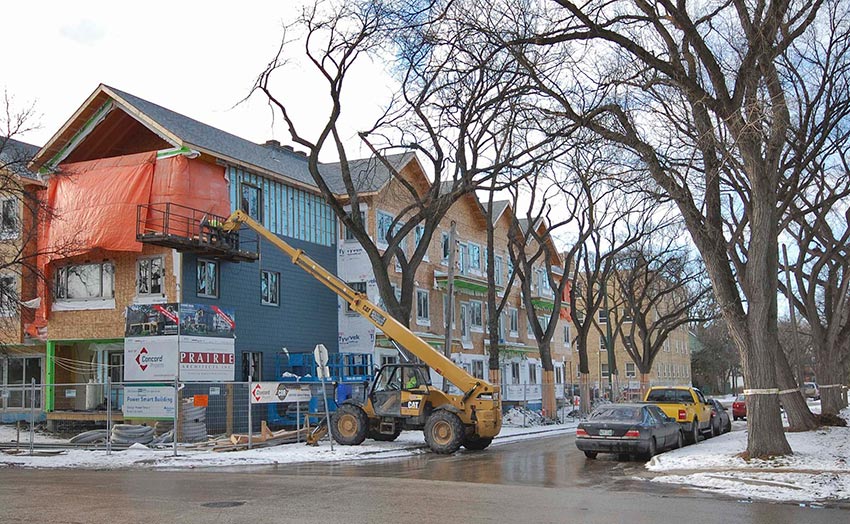 The plan includes the creation of a $15.9-billion national housing co-investment fund, a system of grants and low-interest loans that will help construct up to 100,000 new affordable residential units across the country.

Government programs often work in silos, but if all three levels can come together to harmonize this new spending with other programs, initiatives and long-term planning goals, there is significant opportunity to leverage our investment, inspire innovative private development and affect positive change in Canadian cities.

In Winnipeg, mature neighbourhoods have seen a population decline over the last 40 years, generally due to smaller household sizes. The density in Wolseley, River Heights and St. Boniface, for example, has declined by as much as 30 per cent since the 1970s. This reduction in density leaves fewer taxpayers paying for a greater share of services and infrastructure, while making local commerce, schools, libraries and community centres less viable.

Targeting new, affordable, infill housing in older neighbourhoods would also provide a greater return on transit investment for all levels of government. By intensifying population around existing transit routes in central areas, buses can run shorter distances with more riders, making the system more efficient and economically sustainable. This strategy also has the important benefit of offering greater mobility options that improve access to employment, education and recreation.

Civic leadership could help direct the federal housing investment into infill development by streamlining approvals of often contentious higher-density projects in mature neighbourhoods. Many cities also offer bonuses of higher densities, fast-tracked approvals or lower permitting fees to developers who include certain percentages of affordable housing in their projects. Reducing minimum zoning requirements for on-site parking would ease a barrier to infill development and promote construction of secondary suites on existing properties.

Dovetailing programs from the national housing strategy with the spending of revenues to be raised through the provincial carbon tax could leverage taxpayer investment and more effectively realize the goals of each. Creating incentives to develop highly efficient residential buildings in walkable and transit-friendly neighbourhoods would reduce car dependence, lower building operating costs and help the province meet its targeted reduction of greenhouse gas emissions.

The federal government hopes to attract private and public partners to create innovative solutions to providing affordable housing. An inspiring example of such a project nearing completion in Winnipeg is the Old Grace Housing Co-operative on Arlington Street in Wolseley. A former hospital site that typically would hold about 14 single detached homes will instead provide 60 affordable units with up to four bedrooms.

Half the suites are reserved for households that qualify under the provincial affordable housing rental program. Residents pay to own a share of the co-op, which is bought back if they leave, as well as a monthly occupancy charge that varies depending on unit size. A non-subsidized, market rate co-op share for a two-bedroom unit costs $92,000, with a monthly charge of $1,135.

Designed by Prairie Architects, the building features traditional peaked roofs, front porches and colourful and varied siding materials that effectively break down the mass of a single large building so that it sensitively fits within the character and scale of the old neighbourhood.

The co-op program is a time-tested model to create affordable housing in a mixed-income development that establishes a strong internal community and contributes to a more diverse, dense and prosperous surrounding neighbourhood. Old Grace stands as an important precedent which, under the national housing strategy, could be replicated effectively in many mature suburbs.

Innovative mixed-income projects also could take the form of highrise downtown development that leverages federal investment with civic and provincial incentives such as tax-increment financing. A model that could be looked at as a precedent for this type of development is the 14-storey Downtown Commons near the Winnipeg Art Gallery, developed by the University of Winnipeg Community Renewal Corp. and designed by LM Architectural Group.

Built close to transit routes and incorporating car-sharing strategies, the project combines premium-market, affordable and rent-geared-to-income suites, organized throughout the building without any identifiable hierarchy to promote a sense of equality and inclusivity. The project incorporated an innovative funding model that brought together private and public sources such as private financing, downtown development grants, affordable housing tax credits and government loan guarantees.

The result is a building with a wonderfully diverse internal community made up of tenants from a wide range of backgrounds, circumstances and income levels. Providing greater support for this type of model could help realize federal affordable-housing goals while contributing to downtown renewal by creating an inclusive, diverse urban community.

If governments and the private sector can work together to strategically align funding from the national housing strategy with other initiatives such as transit, daycare, environmental programs, urban planning policy and innovative private development models, the opportunity exists to transform the lives of more than 1.5 million Canadians in housing need and redefine the shape of Canadian cities and neighbourhoods for the next generation.