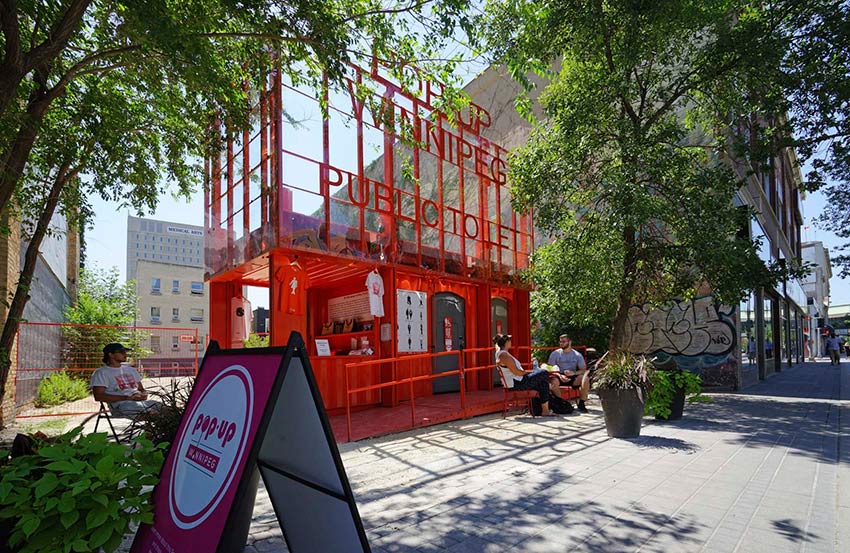 Pop-Up Winnipeg Public Toilet is a temporary washroom facility that is the latest incarnation of a decade-long campaign by architect Wins Bridgman to make universally accessible toilets a permanent piece of public infrastructure in downtown Winnipeg.

In 2012, Canada signed a United Nations document recognizing basic sanitation as a human right. As Canada’s social divide widens, access to washrooms has become an issue for a growing number of people in our cities. Possibly more than any other human-rights issue, sanitation is intrinsically linked to the idea of human dignity and is an underlying determinant of physical and mental health.

Lack of proper sanitation for the most vulnerable people in our society can increase incidents of abuse and discrimination, exacerbate the cycle of poverty, drug addiction and health problems and ultimately create greater barriers to a basic quality of life and self-determination.

Providing access to public toilets addresses issues beyond poverty and homelessness, including gender and age equality, and social inclusion for those with disabilities or chronic health conditions that limit freedom of mobility without consistent, reliable access to a washroom.

Public toilets can also be a tool of urban renewal, creating a more comfortable pedestrian experience, attracting tourists and shoppers to the sidewalks and businesses, as well as reducing odours and improving neighbourhood cleanliness.

The Pop-Up Winnipeg Public Toilet is a low-cost pilot project, realized through a partnership between Bridgman Collaborative, Siloam Mission and the Downtown Winnipeg BIZ. The eye-catching installation will move to four different downtown locations throughout the summer.

Bridgman Collaborative’s design responded to this need for portability by using a shipping container as the facility’s structural frame. This provides a base for walls that slide up when open to increase the structure’s presence on the sidewalk and provide a sculptural quality to its design. The bright orange colour adds a level of whimsy and fun that helps encourage discussion by breaking down the stigma that can make public conversation about toilets uncomfortable.

A unique added component of the facility is a small retail kiosk, dubbed the "social incubator," which is staffed by members of Siloam Mission initiatives such as the employment and foster-care exit programs. The kiosk offers the opportunity for young people to gain work experience while providing a presence that helps reduce vandalism and misuse of the facility.

For many decades, public washrooms were seen as a symbol of a progressive and modern city, considered an integral part of the public infrastructure. In Winnipeg, a number of ornate brick-and-stone public lavatories dotted the sidewalks of the city centre, each serving up to 1,300 people per day in the 1960s. All were eventually removed to save costs or to make room for wider roads, as cars replaced pedestrians in downtown Winnipeg.

Since then, as in most Canadian cities, we have unfairly downloaded this public infrastructure onto private businesses such as coffee shops and restaurants, a situation that can lead to targeted exclusion and restricted hours of access.

Many North American cities are beginning to reconsider the importance of accessible public washrooms and are looking for ways to overcome the traditional challenges of cost, cleanliness, maintenance, crime and vandalism.

This spring, Montreal installed the first of 12 automatic, 24-hour, free, self-cleaning toilets in the city centre. At a cost of $300,000 each, the units use technology to solve many of these challenges. Cleanliness is addressed through an automatic process that takes about one minute after each use.

Robotic arms spray disinfectant, sweep and squeegee the surfaces and then air-dries them clean. To deter illicit uses, doors open automatically after 15 minutes of use, or if floor sensors detect two adults entering the stall.

To reduce costs, Vancouver signed an agreement that provides a private contractor with the rights to street furniture advertising revenues, in exchange for installing and maintaining things such as transit shelters, bike racks and public washrooms. The city now has 11 automated toilets, including two successful installations in the Downtown Eastside neighbourhood, an area plagued by homelessness and drug addiction. Local residents are employed to provide maintenance.

Los Angeles has gone one step further, building a mobile hygiene centre in its poorest neighbourhood; the facility includes toilets, showers and laundry facilities, intended to instil the area’s nearly 2,000 homeless people with a sense of hope and dignity.

The Pop-Up Winnipeg Public Toilet is an important step in furthering the conversation about providing clean, accessible washroom facilities for those who need them most. Other cities are demonstrating that the challenges can be overcome.

The solutions cost money, but if we consider toilets part of basic public infrastructure, the costs likely become manageable within the scope of civic and provincial infrastructure budgets. We build washrooms in suburban parks.

The little orange toilet is conceived as a temporary pilot project, but its early success provides a promising direction for permanent facilities. After one month located in front of Holy Trinity Anglican Church on Graham Avenue, a dramatic improvement in area cleanliness and a significant reduction in vandalism was realized. The church is now publicly supportive of a permanent presence of such a facility.

If we hope to build a prosperous and inclusive city, it is imperative that we pursue the goal of providing a basic level of human dignity to every one of our citizens.