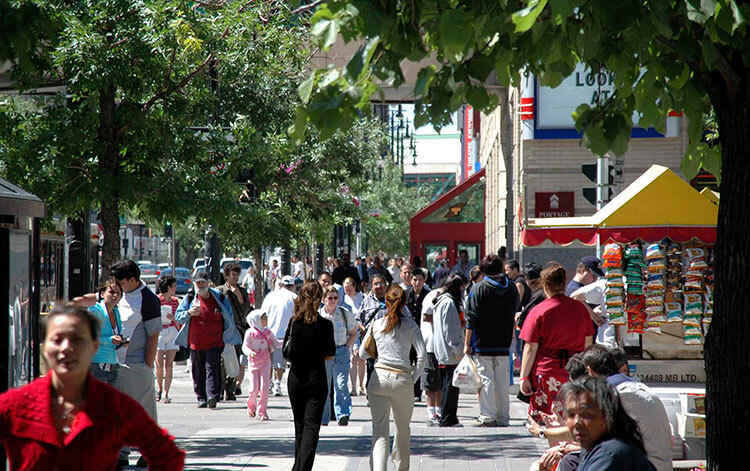 Toronto, Calgary and Edmonton, cities that Winnipeg competes with for investment, tourism and immigration, all have official pedestrian strategies to guide policy, increase pedestrian numbers and make those cities better places to walk. In contrast, Winnipeggers are voting on the idea of keeping concrete walls, in the heart of our city, that have intentionally repelled pedestrians for four decades.

The key principles of designing an urban area to be walkable are creating direct and simple pedestrian connections along a network of diverse destinations, as well as establishing physically interesting and comfortable places to walk that feel safe and promote social interaction.

Walkability has been quantified by the website walkscore.com using a 100-point scale that measures pedestrian connectivity and distances to employment, education and other amenities. A significant body of research has proven that when neighbourhood walkability increases, so does desirability, and in turn residential property values and the tax base.

A national study in the U.S., conducted by CEOs for Cities, found that a one per cent improvement in Walk Score resulted in a residential property value increase of up to US$3,000. It was found that in higher-density areas such as downtown, this benefit was even greater, as people attracted to urban living more often seek a lifestyle that allows walking to be a central mode of transportation.

In Winnipeg, we have recognized this trend and have spent a lot of effort over the past decade trying to improve active transportation and livability in downtown to create an urban neighbourhood that attracts residential development. We have constructed bike lanes, plazas and parks, installed public art and new lighting, narrowed side streets and widened and improved sidewalks.

The strategy is working. The population of downtown is nearing 18,000, double what it once was, and the Exchange District population has grown from 250 at the turn of this century to more than 2,500 today.

Increased walkability in urban centres has also been connected to growth in commercial property values. In a study conducted by the universities of Arizona and Indiana, it was found that a 10 per cent increase in the walkability of a business district was associated with an increase of up to eight per cent in commercial real estate values.

A Brookings Institution study focusing on Washington, D.C., found that office buildings in areas of good walkability commanded on average almost US$9 per square foot more in commercial rent. In Winnipeg, a number of businesses relocating from Portage and Main to True North Square, a development centred around public space designed for pedestrians, is an example of how vibrancy and walkability can create an image and that is attractive to commercial tenants.

The economic benefits of walkability also extend to the retail sector. The same Brookings study discovered an increase of almost US$7 per square foot in walkable-area retail rents. It has been found that pedestrians in urban centres shop more often, more locally and spend more money over time than commuting drivers do.

Numerous case studies from cities around the world demonstrate that making improvements in a city centre to promote growth in walkability and pedestrian numbers can significantly increase retail activity. Hillsborough Street in Raleigh, N.C., was once the state’s most dangerous street for pedestrians, and has now been transformed into a walkable, complete street, attracting more than US$200 million in new development and increasing retail sales by more than 30 per cent.

A final way in which walkability can be good for the economy was highlighted in an intriguing study completed in Auckland, New Zealand, which looked at the correlation between pedestrian connectivity and business productivity. It studied the concept of agglomeration economies, in which businesses that locate near one another benefit from the cost reductions and gains in efficiency that result from this proximity.

Pedestrian connectivity between businesses was shown to inspire more face-to-face contact, chance meetings, knowledge sharing and idea exchange outside of the office environment, stimulating greater business creativity and innovation. Improved pedestrian access to services, clients and complementary businesses, particularly for knowledge and creative industries, was found to be a key driver of labour productivity.

The study mapped buildings, employment densities and pedestrian travel patterns to determine how well connected each business was to other businesses. This was then compared to each firm’s productivity (goods and services delivered per hour). The study concluded that there is a positive and significant correlation between walkability and business productivity. It determined that a 10 per cent increase in walkability for a business location resulted in a 5.3 per cent increase in labour productivity, and if downtown could be made one per cent more walkable overall, it would add NZ$42 million per year to Auckland’s economy.

Cities around the world are looking at pedestrians as the drivers of modern urban economies. Those responding to this change today, by making planning decisions that remove barriers to pedestrians and effectively translate walking into economic growth, will be the leaders of tomorrow.