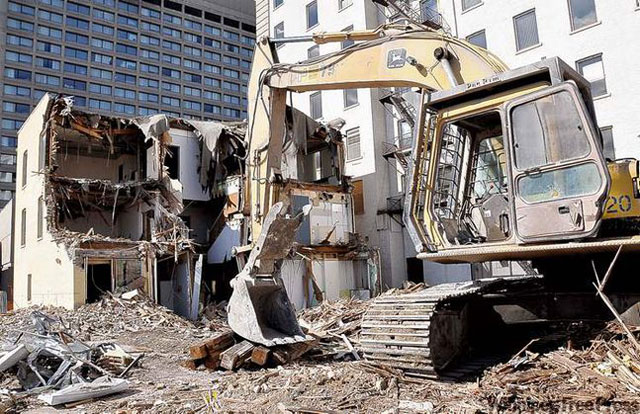 Today's rediscovery of the Exchange District is attracting new development that is threatening to alter its character and feel. This sudden pressure has exposed the need for strong public policy that defines a long-term vision for the heritage neighbourhood.

The current "building by building" approach to Exchange District planning can result in development that loses focus on the preservation of its character and historic significance.

As an example, the demolition of the small, 90-year-old Grain Exchange Annex to create a loading zone for the adjacent building may seem to be an insignificant loss. Like the old collection of hockey cards, however, discarding the lesser-known players may leave the Bobby Hull and Gordie Howe cards, but the complete collection is lost, becoming significantly less valuable as a whole.

The values of heritage preservation are often seen as being in conflict with pro-business ideals, but in the Exchange District a universal commitment to maintaining and enhancing the character of the neighbourhood is good for business in the long term.

The intact collection is a commodity in which every building, large and small, works together to create value. Being part of a greater, cohesive entity increases the attraction of each individual building as a target for development. The loss of even the small contributors to that collection reduces the value of all others.

While it's important that there is a shared desire to preserve the Exchange District, its future is not as an outdoor museum.

The area will only flourish with the introduction of suitable new development.

Projects like the Cube stage and a proposal for a dramatic residential addition at 168 Bannatyne have sparked debate over what form this new development should take.

Larger projects like the Qualico development on Market Avenue could soon be facing the same debate as they propose to redefine the scale and expression of an entire block of buildings with new construction.

Many North American cities with historic districts have implemented guidelines for new projects with a range of approaches.
In St. Louis, architects are required to present photographic precedents of the historic buildings that new designs are based upon, while in San Diego, Miami Beach and St. Paul, architectural innovation is encouraged.

Modern design in a neighbourhood with a defining character such as a warehouse district is a difficult challenge.

New buildings that too literally draw their inspiration from the old ones can result in unimaginative replicas that dilute the impact of the original buildings through artificial parody.
The contrasting style of contemporary buildings can enhance and highlight the craftsmanship and texture of historic neighbours.

Modern infill buildings that are sympathetic to their context through massing, scale, rhythm and proportion can be successful additions to a historic neighbourhood while maintaining an elegant and progressive esthetic.

New projects that attempt to overshadow the historic buildings through dramatic impact can reduce the cohesive character of the area. The true challenge of injecting new design into a heritage neighbourhood is to maintain a respectful and appropriate dialogue with the old buildings while expressing creativity and imagination that inspires the community. To design a building that at once stands out and blends in is a difficult objective, but the reward can be an eclectic urban neighbourhood that both celebrates the past while looking to the future.

The cohesive nature of the Exchange is what makes it significant and is the very reason for its National Historic Site designation. Its future depends on a refocused commitment from all levels to search for creative solutions to redevelopment, emphasizing the preservation of all heritage buildings in the district while ensuring that new projects sensitively bridge the gaps without diminishing its overall character.

After a year in which four protected heritage buildings in the Exchange were approved for demolition, with several proposals for new construction on the horizon, the need for clear development guidelines that define a common direction and long-term vision for the district is becoming essential. Careful management of growth in the area will ensure that we pass to the next generation a neighbourhood that is even more wonderful and inspiring than the one that has been passed to us.

Republished from the Winnipeg Free Press print edition September 7, 2010 B5