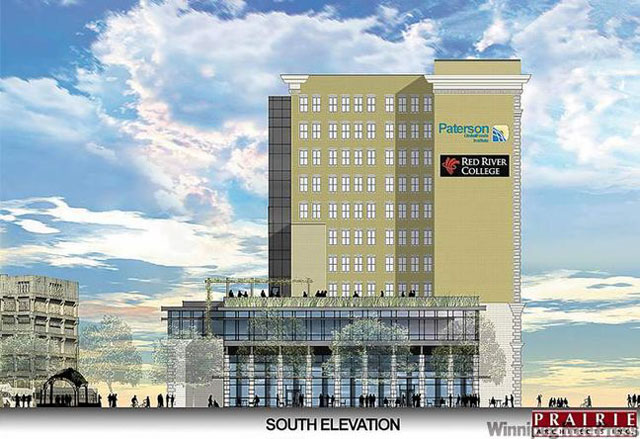 Pedestrians gazed in wonder as her steel frame rose high above the city in the summer of 1903. The Manitoba Free Press wrote: "The huge steel stanchions have reached a point skyward where it almost begins to make one dizzy to view the upward progress." She was a symbol that this confident young city had arrived on the national stage, a declaration that it could compete with the great cities of the east.

Union Bank Tower at the apex of the bend in Main Street took its place in Winnipeg's skyline more than a century ago. Many of the great events in our city's history have happened in her shadow, yet most of us pass by without appreciating her significance or engaging in the stories she can tell.
Modern-day revitalization will inject energy into downtown when it becomes home to Red River College students.

Designed in the Chicago School style by prominent Toronto architects Pearson and Darling, the decorative cornice hangs 47.6 metres above the sidewalk. This height would for two years allow Winnipeggers to boastfully lay claim to the "tallest skyscraper in Canada" as the first building to exceed 10 storeys. The flag pole on its roof proudly flew the highest Union Jack in the British Commonwealth.

During construction, steel worker William Unkauf fell to the ground from a fifth-floor girder, but would miraculously make a full recovery after spending two months in hospital.

Another of its innovations was the largest and fastest elevator in the country, whisking office workers to the top floors. It survived as one of the last working cage lifts in Winnipeg, operated daily by an elevator man as recently as the mid-80s.

Union Tower is one of only a few buildings in Winnipeg to legitimately deserve the moniker 'world class.' Even its method of construction was a groundbreaking Canadian first that revolutionized the way buildings are built to this day. The Fuller Construction Company -- which had just completed New York's Flat Iron Building, with most of Chicago's new skyscrapers in its portfolio -- implemented for the first time in Canada the modern system of construction where trades such as plumbers and electricians work directly for a general contractor who supervises and co-ordinates the work. This significant shift from architect-led construction transformed the building industry.

Even with this long list of distinctions and a National Historic Site designation, a generation of Winnipeggers has never known Union Tower as anything but a dark, empty building. Thankfully, after 18 years in hibernation, surviving major fires and short-sighted calls for demolition, an inspiring new chapter is about to be written in the story of the grand old tower.

Designed by Prairie Architects, the building will be transformed into the Paterson Global Foods Institute for Red River College. The majestic banking hall will once again echo with activity, now as the formal dining room of the culinary school's public restaurant. Cooking labs and rooftop terraces will overlook Old Market Square and a glass atrium will open to the southern courtyard, animating the surrounding area with the vibrancy of student life.

The modern lines of new construction will complement the historic architecture in the same way Red River College's Princess Street campus does. Designed with a commitment to sustainability, the tower will receive high-performance operable windows and be completely insulated for the first time with foam sprayed into the walls at each floor. A large rooftop urban garden will grow fresh herbs to be used in the restaurant.

With dramatic views over the city, the tower above will house more than 100 student residences that will feature the building's original marble corridors and maple flooring in each suite. Slanted floors from past building movement will serve as a reminder to the students the tower was built on the site of a slough so deep that the adjacent sidewalks once had guardrails to keep people from falling in. Local legend held that a man once drowned somewhere between the site and old city hall.

The rehabilitation of Union Bank Tower is one of the most important heritage preservation projects in Winnipeg's history, both because of the building's individual significance and the impact its renaissance will have on the downtown. Increasing the student population has proven to be an effective means of urban revitalization in many other cities. Students living downtown will support its amenities and activate the surrounding neighbourhood at all hours of the day.

It seems appropriate a building that challenged our city to aspire to greatness a century ago will again play a key role in moving Winnipeg forward and into the future.

Republished from the Winnipeg Free Press print edition June 14, 2010 B5