The Ministry of Competitions

With an office distinguished by character, a collegial environment and delight in the creative process, design culture is integral to the Number TEN philosophy. We are always on the look-out for innovative ways to communicate, design and build. Recently, the Number TEN spirit of design culture was further strengthened through Design Interns Aaron Pollock and Victoria McCrea’s work in the development of what has come to be known as ‘The Ministry of Competitions’.

Aaron joined Number TEN over the summer to work alongside Victoria. Together, the two oversaw a new Number TEN initiative focused on submitting entries into architectural design competitions, engaging the entire office in design topics and discussions. Throughout the summer, Aaron and Victoria initiated various discussions about design and design processes, and played the lead role in submitting innovative conceptual ideas to help solve some interesting design challenges both locally, and abroad.

Architectural design competitions are generally put forward by businesses and organizations seeking unique design solutions that address a difficult challenge. Submission requirements and parameters change from competition to competition, but all require extensive design work and representation. Depending on the competition, the winning team is often then responsible for bringing the project to life.

For each competition, Aaron and Victoria (collegially known as ‘The Ministry of Competitions’) contributed to Number TEN’s strong design culture by engaging staff in design-focused discussions. Gathering everyone who was to be involved in each project, the interns would begin by introducing the design briefs and requirements. They then presented their own research on project background information such as geography, culture, history, constraints and challenges, and came to the table with some initial ideas. Those attending the meetings were often asked to come prepared with precedent projects or ideas, and from there a conversation would evolve.

These conversations encouraged the entire office to have open discussions about the role of design in culture, what good design means, and how to achieve it. Staff became excited about each new discussion, and were eager be a part of each project as they progressed through the submission process. In the end, by engaging the whole team, Aaron and Victoria succeeded in designing and submitting five competition entries for projects at home and abroad. 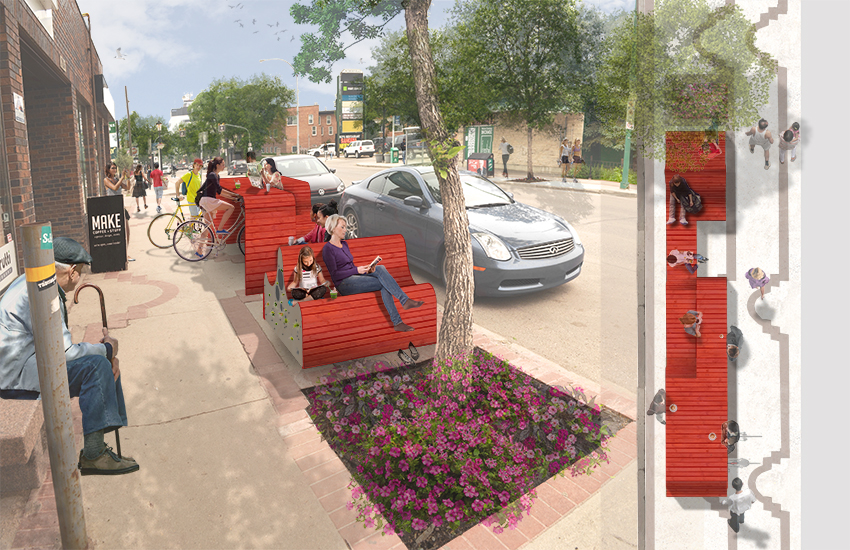 The Bench was the first competition in our office. The request was simple: create a bench, located on Corydon Avenue, to accommodate 12 people. We saw this as an opportunity to integrate form and function. When we engaged in our first design discussion, there were plenty of ideas and the enthusiasm within the team was fantastic. In the end, we submitted two unique ideas, and we were pleased with the trajectory for the competitions to come. 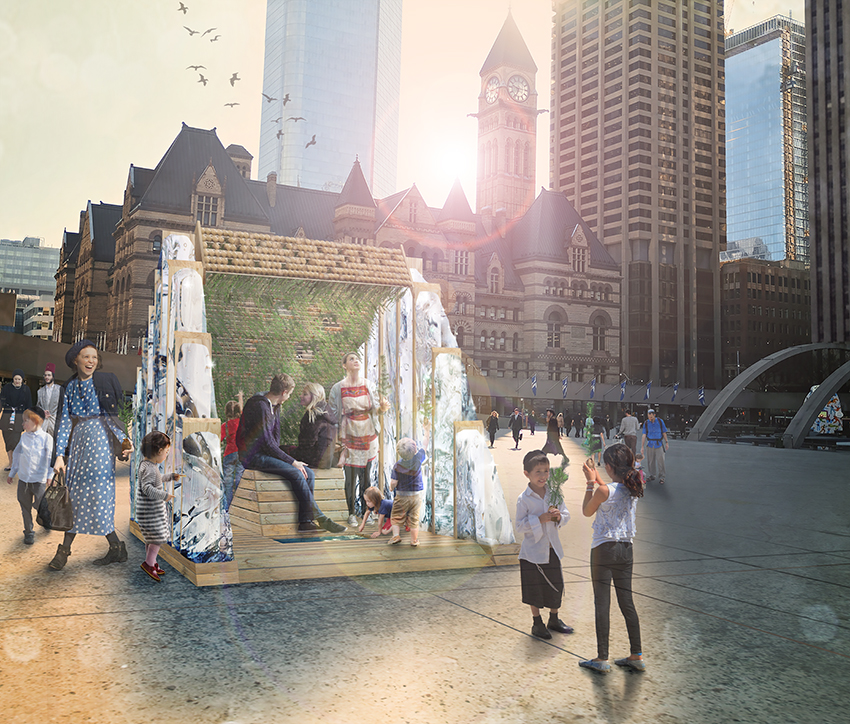 Located in Toronto, this competition was for a temporary structure celebrating traditional Jewish Sukkah. Focused on the temporal nature of the project, our design focused on ways the structure could change over time. With the use of temporal materials such as ice and tree saplings, the result was a structure that slowly disappears, eventually becoming a shell to signify the festival’s end. 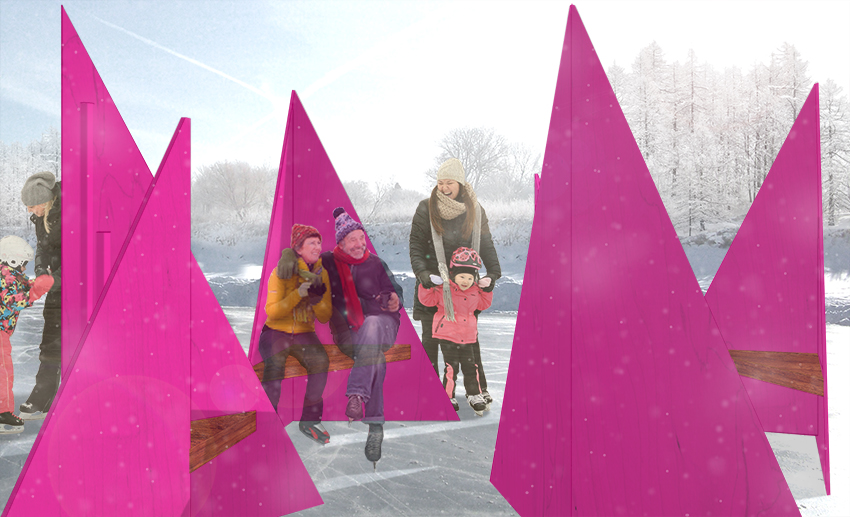 We held a brief interoffice competition for those interested in designing structures for Winnipeg’s Warming Hut Competition. Winning installations would be featured on the Red River Mutual River Trail trail on the Assiniboine and Red Rivers, providing shelter and entertainment to tourists and locals using the trail. There were a dozen or so interoffice submissions, with Number TEN’s principals acting as the jury. There were even prizes for 1st, 2nd and 3rd place. The competition was a fun event that started generating ideas for our next venture, MELT. 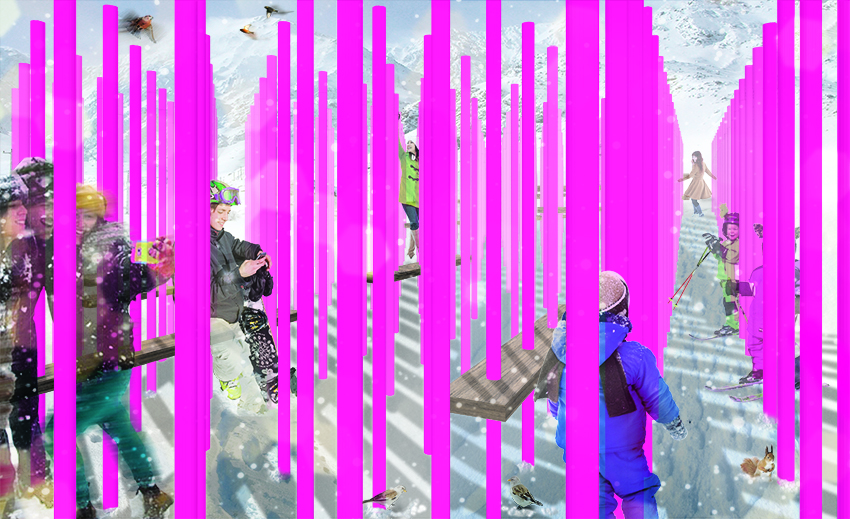 MELT is the name of an art & architecture winter biennale in Flachau, Austria. Tasked with designing an installation in the Austrian mountains, we sought to connect the winter festival with a local festival, Warming Huts. The intent was to design installations that reflect one another in colour, but are formally quite different. Referencing each landscape, the installation would bring the prairie horizon to Flachau and the mountains to Winnipeg. The final touches were the hashtags placed on both installations. These make the installations searchable through social media and allow visitors of each event (which run concurrently) to connect with one another and see the different ways each culture celebrates winter. 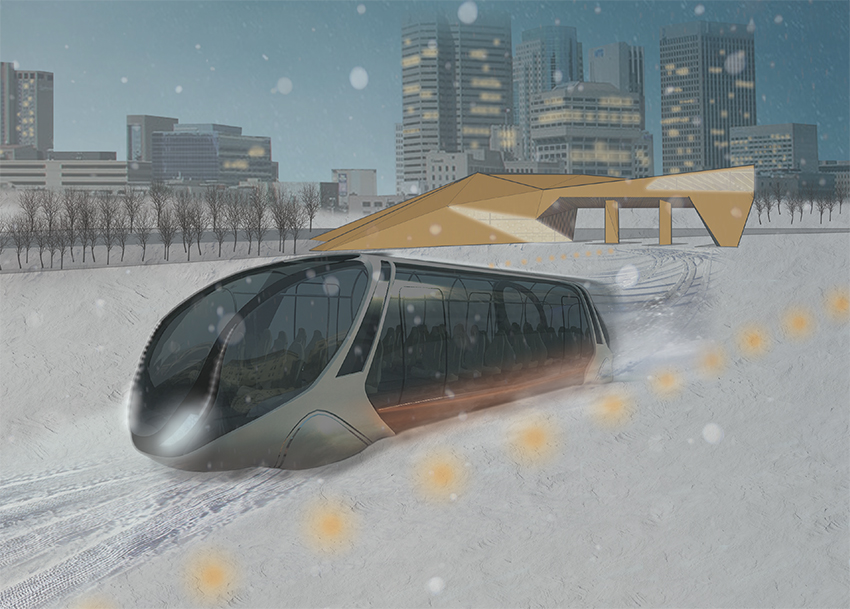 Rivercity 2050, an ideas competition, brought an interesting approach to thinking about design. Participants were asked to think ahead to the year 2050, and how Winnipeg’s rivers may be utilized as a main transit artery of water buses in summer and ice busses in winter. After a brief discussion the idea took off and developed in the renderings and writing submission. All submissions were featured in the Winnipeg Free Press’ The Rivers: Part 3 by Randy Turner. The outcome was unique, and provided a way for people in the city to see the many opportunities our rivers have to offer.