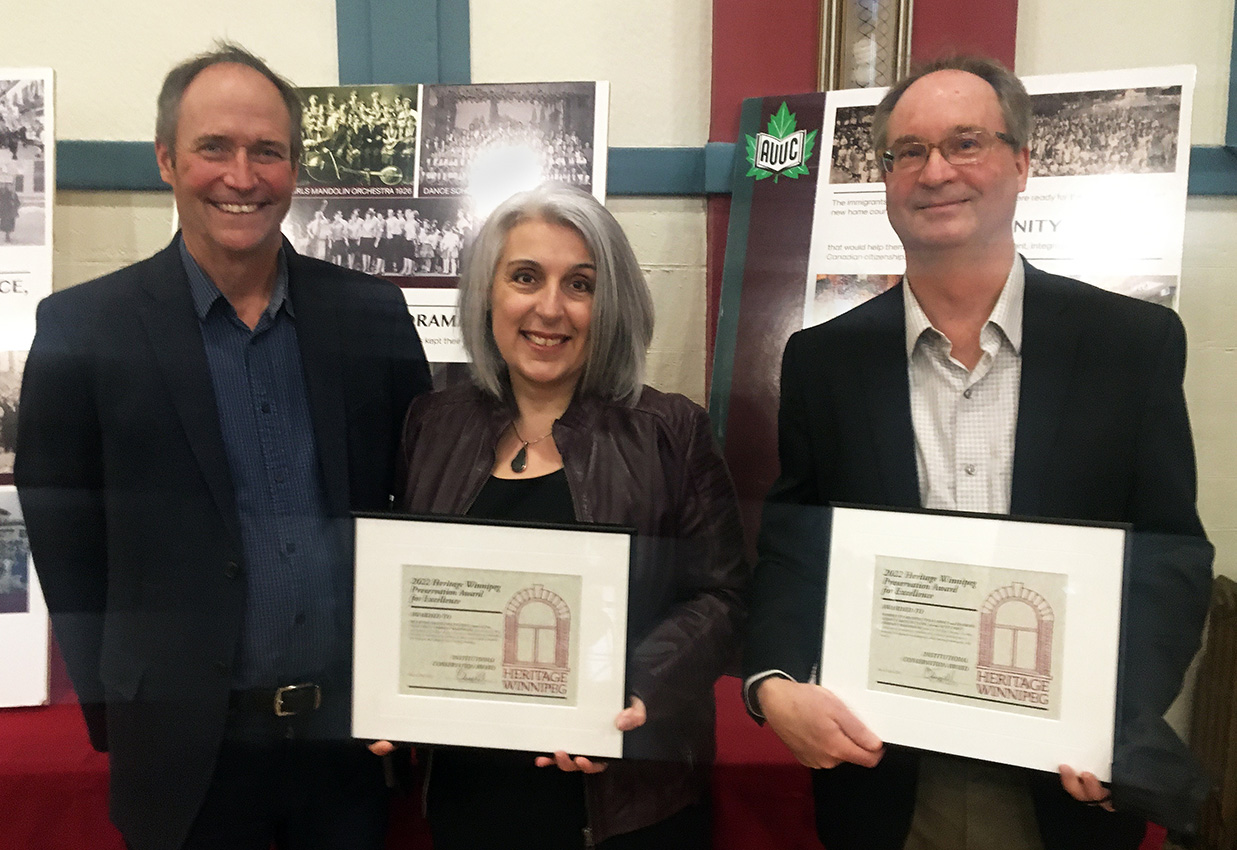 The Scott Fruit Company Building has been carefully integrated into the overall development of educational space for Manitou a bi Bii daziigae at RRC Polytech’s Exchange District Campus.

The three-storey brick building was first used as a fruit storage warehouse for a wholesale enterprise led by Robert Ross Scott and his four partners.  Scott Fruit Company rented the top floor of its warehouse in the latter 1910’s to the Butterick Publishing Company, Standard Fashion Company and New Idea Pattern Company.  When the fruit wholesaler moved to Ross Avenue in the mid-1920s it was succeeded by Mid West Paper Sales Ltd who remained until the mid-1950s.  Despite its variety of tenants, there have been very few exterior alterations to the modestly ornamented brick and concrete exterior in the building’s 108 years.

Defining elements of the exterior were carefully rehabilitated to maintain their historic appearance while being upgraded to enhance building performance. The exterior wood frames and sashes of original fir construction were repaired and rehabilitated to match the original green colour. The steel windows were cleaned the non-original glass and putty were replaced.  To respect the exterior’s historic appearance and improve energy performance, new double glazed fibreglass windows were installed on the interior side of the steel windows in line with the newly insulated interior wall. 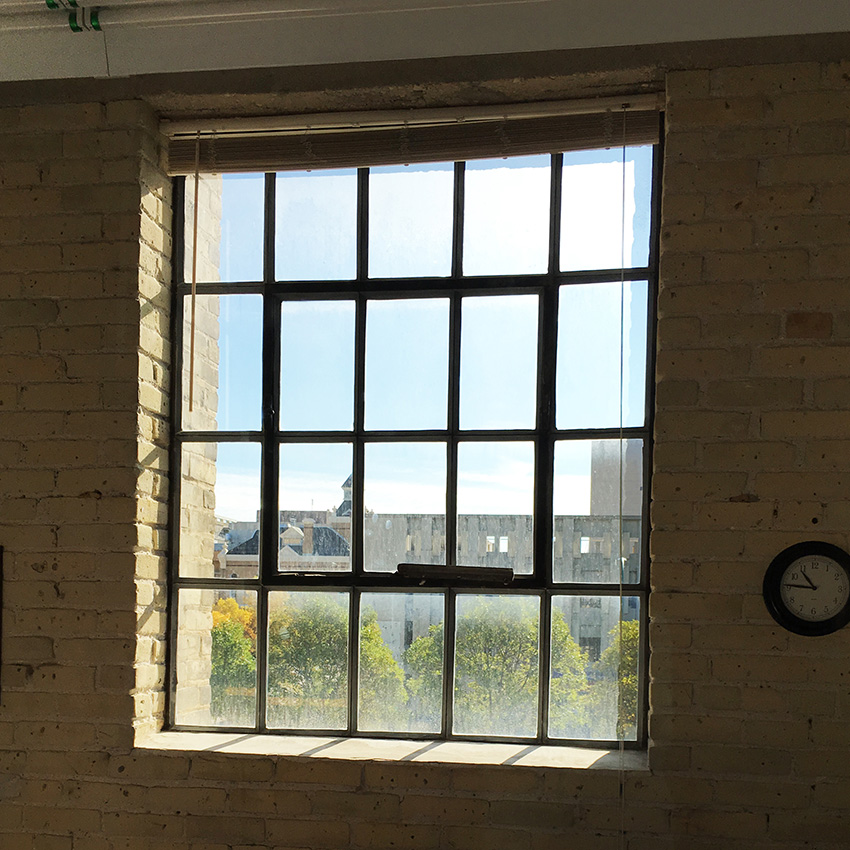 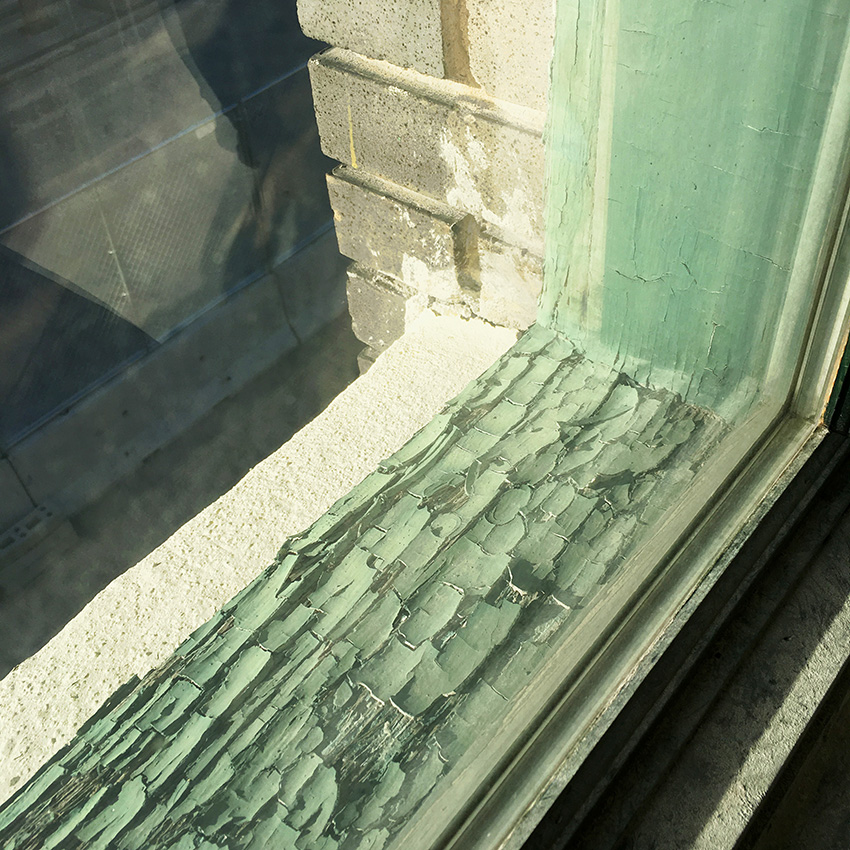 Exterior masonry was carefully repointed and cleaned and the exterior walls were insulated from the interior with spray foam, studs, and drywall. The masonry at the cornice was repaired to maintain its structural integrity and character defining appearance. The concrete window sills and banding were restored as well: cracks were injected with an epoxy, and the concrete was coated with a penetrating sealer. 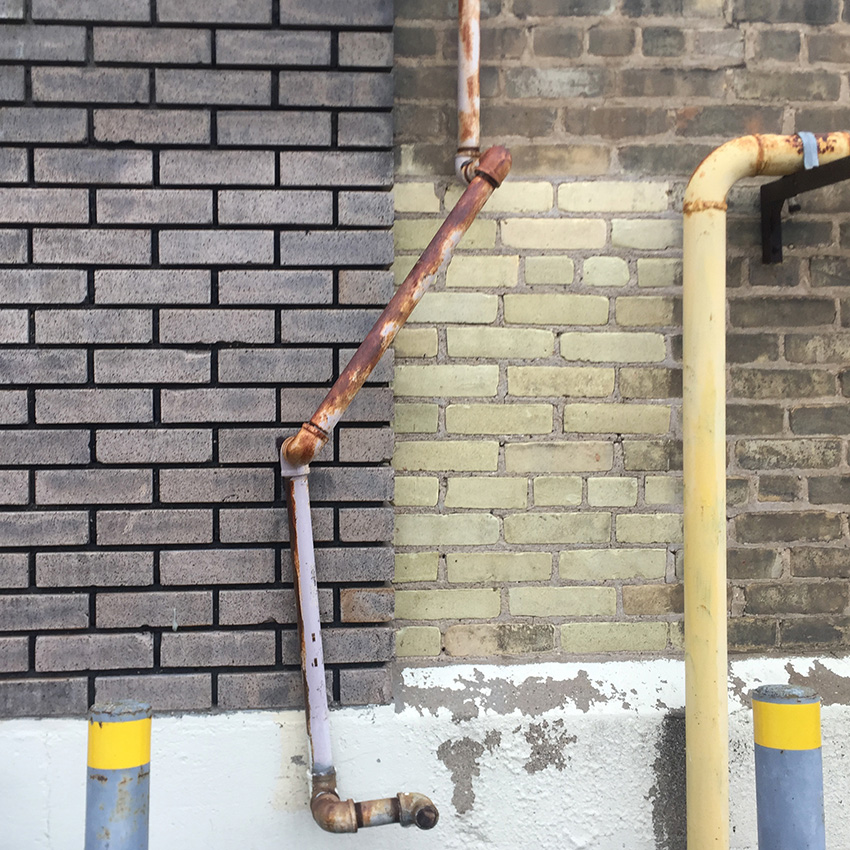 Exterior brick in the process of being cleaned.

Meanwhile, the interior historic character elements were given similarly thoughtful treatment. The original concrete columns’ distinctive mushroom capitals were left exposed by minimizing ceilings and using an access floor system for ventilation and electrical services, and wall placement was carefully planned to leave the column face and capital exposed. 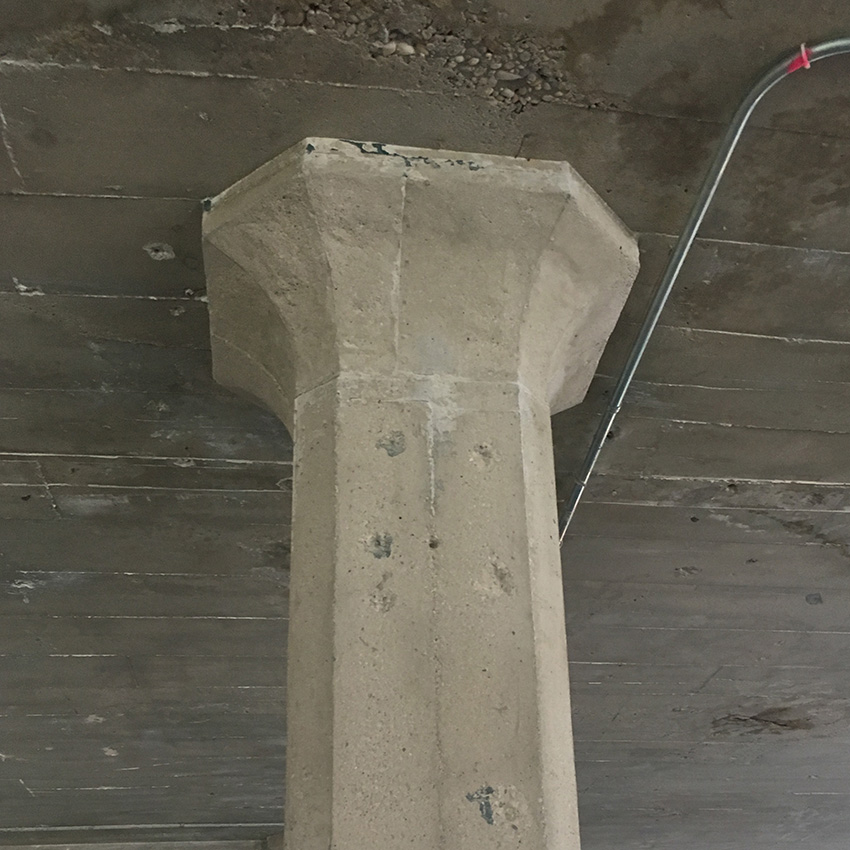 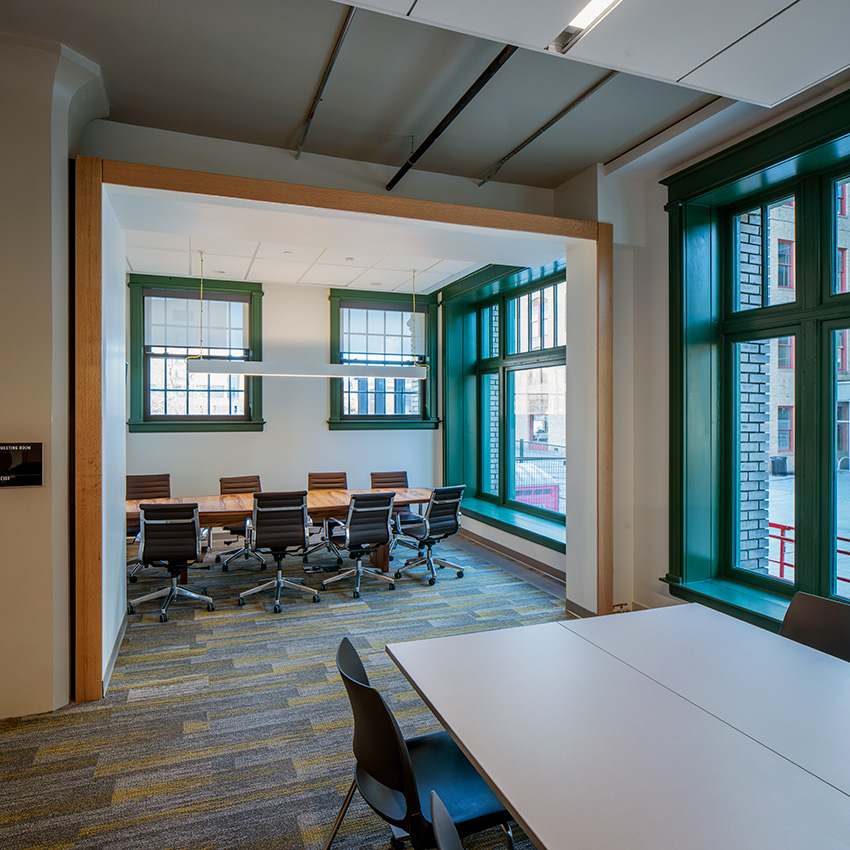 Mushroom capitals before and after restoration.

The steel and wood frame of the building’s original Otis Elevator was refinished and left in place as a feature in the main floor meeting room. The wood plank floor was rehabilitated and coated with a transparent finish. While the elevator was originally used to transport produce from the basement to the main floor of the warehouse, it now serves as a reminder of Winnipeg’s industrial history. 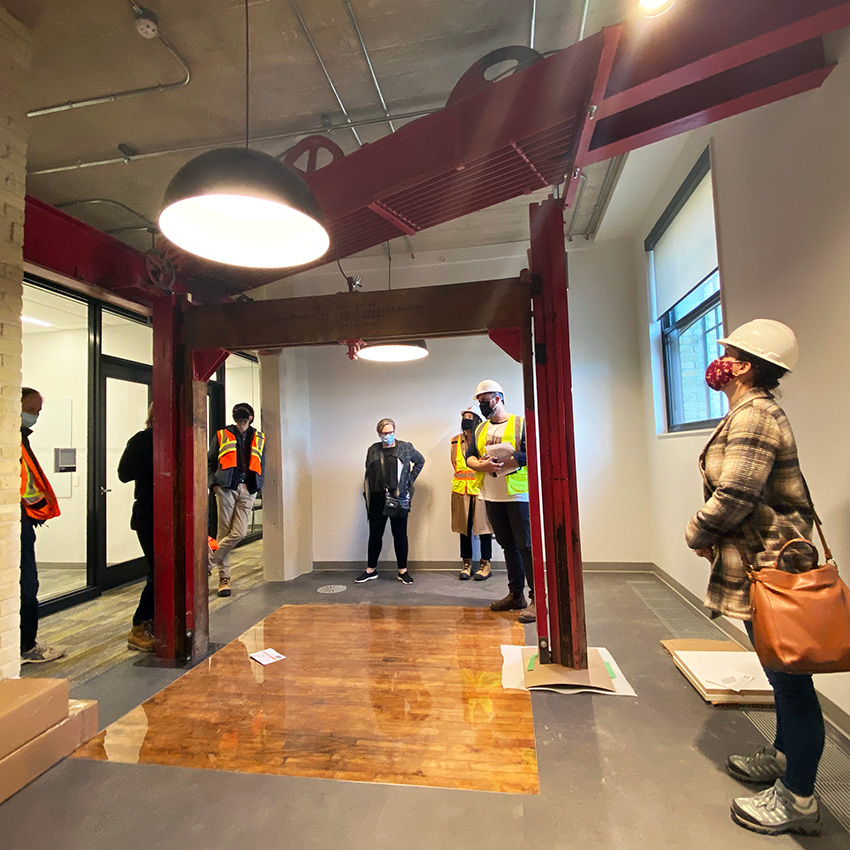 A state-of-the-art four-storey addition completes Manitou a bi Bii daziigae, a building designed to look to the future while respecting the past. This addition connects at the west wall, which was formerly an exterior wall and party wall with the former Metro Motors Annex that was added in the 1970’s.  The stucco on the west wall, including the Metro Motors painted sign, was left in place and new openings into the addition were designed so that the new steel lintels and edges of openings peel away  the stucco finish to reveal the masonry behind. The meeting of the old and the new are clearly distinguished, the architecture of one emphasizing the other, and help to add further character to Manitou a bi Bii Daziigae. 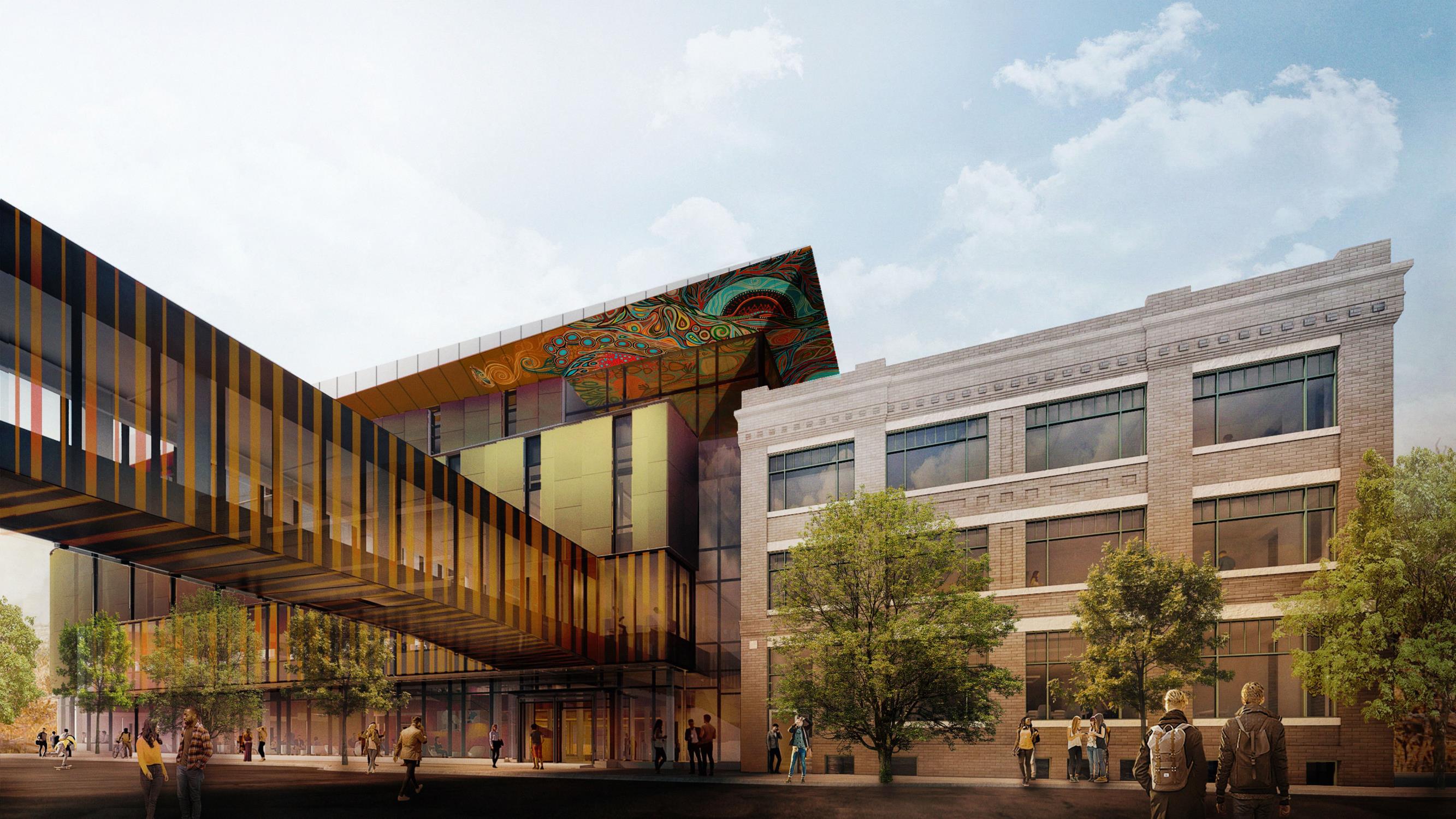 In RRC Polytech’s words, “The connections are more than physical. Born from a young businessman’s dream of success in a blossoming city, the building is once again a hub of activity filled with students striving to become the next generation of successful business leaders. A centre for technology, collaboration and community, the Scott Fruit portion of the building includes meeting spaces, classrooms and testing rooms for the College’s Language Training Centre and ACE (Applied Computer Education) Project Space — creating more opportunities for a connected learning experience between staff, students and industry mentors, in an atmosphere of discovery and development.” Read more from RRC here.

Number TEN is honoured to be among this year’s Heritage Winnipeg award winners. See the rest of the winning projects and teams here.