News release courtesy of the Royal Architectural Institute of Canada. 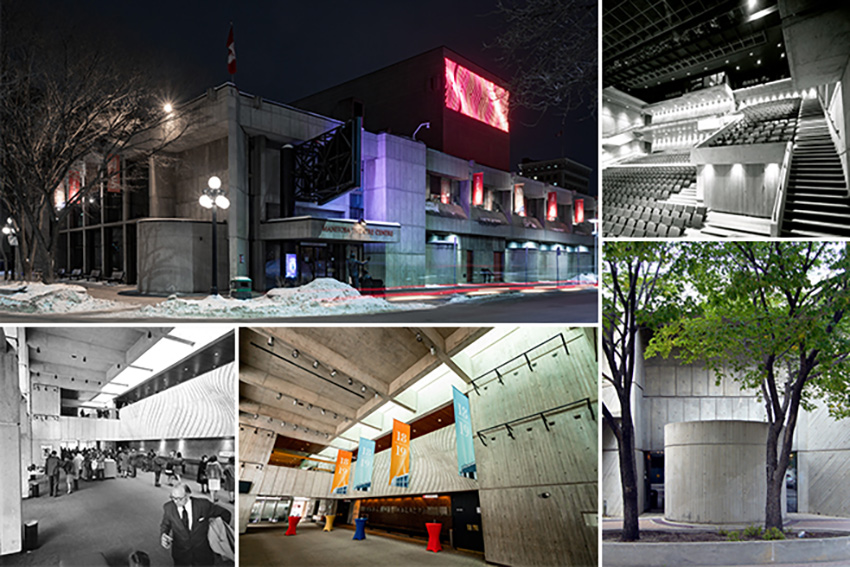 OTTAWA, ON, April 9, 2019 – The Royal Architectural Institute of Canada (RAIC) and the National Trust for Canada announce that the Royal Manitoba Theatre Centre in Winnipeg is the recipient of the 2019 Prix du XXe siècle, an annual award that recognizes Canada’s landmark buildings of the 20th century.

The Royal Manitoba Theatre Centre (RMTC) opened in 1970 and was designed by Number TEN Architectural Group of Winnpeg. The theatre company was the first regional theatre in Canada, founded in 1958, and inspired the development of regional theatres across the country. The RMTC is recognized as a National Historic Site of Canada, both for the company’s influence on the development of Canadian theatre and as an expression of small-scale Brutalist architecture in Canada.

The building was nominated by Susan Algie, Director of the Winnipeg Architecture Foundation, who called the RMTC “a vibrant and beloved cultural institution” that was “conceived as part of a major urban renewal for Winnipeg….[and] played a significant role in the city’s cultural renaissance.”

The collaboration between the ground-breaking theatre company and the architects was important, Algie notes. “The design of the building responded to the independent spirit of the theatre group….[T]he theatre design reflected trends in Canadian society toward a more relaxed and open-ended social order.”

Principal architect Allan H. Waisman (1928-2017) and design architect Robert Kirby were key members of the design team. Kirby later became Director of the University of Calgary’s Architecture Program. Waisman, born in Winnipeg to immigrant parents, was a founding partner of Number TEN Architectural Group and garnered many awards throughout his career. He was an ardent supporter of the arts and active on the boards of the Manitoba Theatre Centre, the Winnipeg Art Gallery and the Royal Winnipeg Ballet.

“We are very proud that the RMTC building is part of our firm’s legacy,” says Number TEN partner and current RMTC board member Dave Lalama. “The high standards and values set by Allan Waisman and all of our founding partners continue to guide what we strive toward each day as architects and designers. This recognition also shines a light on the Royal Manitoba Theatre Centre, an organization that has so greatly enriched our community. We are honoured to see the RMTC building elevated to the same status as some of Canada’s greatest landmark buildings.”

As an example of the Brutalist architectural style – which originated in 1950s London and became popular for public buildings in Canada in the 1960s – the RMTC is smaller in scale and is described in its nomination as ‘informal and intimate’, ‘unpretentious’, ‘relaxed’, ‘modest and sensitive’.

The jury agreed and also called the building a “unique social experiment. It says to all of us that architecture does not exist outside of the material, social and political agendas of its communities. This little building IS Winnipeg, a creative and energetic community of people. It is a gentle, lovely and lovable building.” The jury also praised its “human scale and sidewalk presence” and noted that its owners have been “wonderful stewards” of the building.

“The RMTC design has kept its integrity through the years, and it remains a vital cultural hub in its community,” said Michael Cox, President of the RAIC. "Like the company of players it houses, this building is modest, versatile, and full of surprises – BRAVO!"

“We’re pleased to work with the RAIC to highlight landmarks of Canadian architecture and recognize exemplary stewardship over time,” said Natalie Bull, executive director for the National Trust. “The Royal Manitoba Theatre Centre is particularly notable for award-winning renovations that have accommodated contemporary needs while also respecting the spirit of the building.”

The RAIC and National Trust bestow the Prix du XXe siècle annually to promote public awareness of outstanding Canadian architecture and landmark buildings of the 20th century.
Previous winners include the CN Tower, Simon Fraser University, Habitat ‘67, and the Confederation Centre of the Arts in Charlottetown, PEI.

PUBLIC EVENT: The Winnipeg Architecture Foundation (266 McDermot Avenue) is hosting an exhibition on the history and architecture of the RMTC until April 26, 2019, open to the public from 9 AM to 4:30 PM Monday to Friday.

The jury members were:
John Leroux, MRAIC, architect, historian and Manager of Collections and Exhibitions at the Beaverbrook Art Gallery, Fredericton, NB;

Richard Moorhouse, Vice‐Chair of Heritage Toronto and President of the Arts and Letters Club of Toronto Foundation. Past Chair of the National Trust for Canada, Toronto, ON.

ABOUT THE NATIONAL TRUST FOR CANADA
The National Trust for Canada is a national charity that inspires and leads action to save historic places, and promotes the care and wise use of our historic environment.