Wood: Pride of the Past and An Incentive for the Future

The World Interiors Day 2022 guiding theme is “Pride of the Past and An Incentive for the Future.” What better subject than wood, an ancient material with enduring popularity, which represents hope for a better future, and provides a tangible connection to the natural world?

Wood is beautiful and versatile in its utility and has been used as a building material for as long as humans have built. Wood is culturally significant: it is the material we turn to when we want to connect more closely to the natural world. Sometimes wood choices are symbolic; sometimes they are based on technical characteristics.

Wood insulates and absorbs sound. It is flexible, lightweight, renewable, and beautiful. We love to see, touch, and use it. Despite the many new and innovative products and materials available to designers, wood has remained perennially popular.

On an individual scale, each piece of wood displays its history in its grain. Environmental conditions and tree variety contribute to the unique grain of each piece. On a broad scale, the use of wood connects us to the past, either through reclaiming techniques or reclaiming materials.

Richardson College for the Environment and Science Complex Feature Wall: History on Display

The atrium in the Richardson College for the Environment and Science Complex on the University of Winnipeg campus is paneled with reclaimed hardwood flooring from the roller rink that used to occupy the same lot. The rink, in its many iterations, was a hub of social activity in downtown Winnipeg. 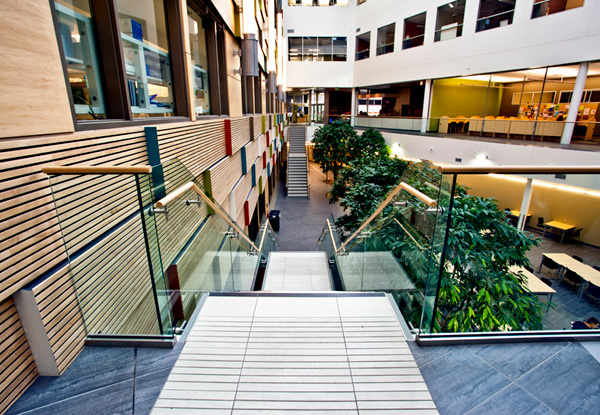 When the rink was built in 1906, the maple floor was the largest of its kind in the country. In 1985, Myron Love wrote the following for the Manitoba Historical Society: “Phil Del Bigio, president of Del’s Electric Motor Supply Ltd., remembers ice-skating as a kid, about 1925, at the Winnipeg Skating Rink while a 12-man band played and shivered… It was near the end of [the ’30s] that the rink was changed over to a roller rink. For a couple of years there was ice skating in the winter and roller skating in summer. After 1936 it became strictly a roller rink, and roller skating became the craze in Winnipeg. A headline in the December 14, 1936 edition of the Tribune read: “Roller skating becoming leading winter pastime in city.” “The Winnipeg Roller Rink was the place to go,” says Del Bigio, “and people came from Emerson, Morris, Portage—all over.” 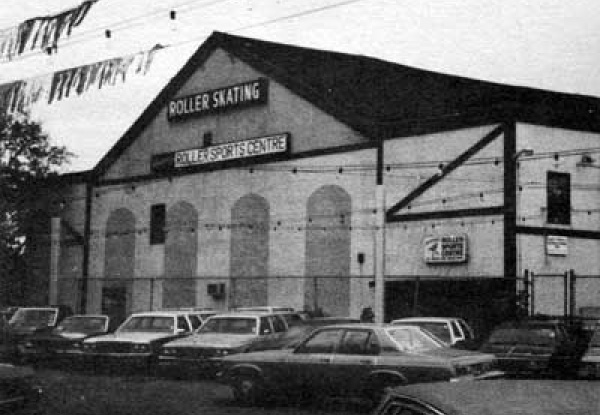 While the popularity of roller skating waxed and waned over the years, the Winnipeg Roller Rink managed to keep stay open for almost a century. It bore many names over its lifetime: the Winnipeg Roller Sports Centre, Dj’s Roller City, and Galaxy Skateland all hold memories for generations of Winnipeggers. 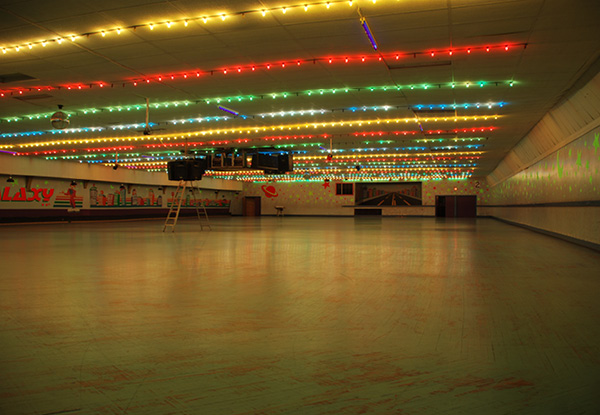 When the rink was torn down in 2007, the maple boards that supported decades of skaters were repurposed on a dramatic feature wall that stretches between floors in the central atrium of the College. Nails were carefully and painstakingly removed from each board while the tongue and groove on each wood strip was planed.  On some boards, the original paint needed to be sanded off. If you look carefully, you can see nail holes here and there – a clue that the boards aren’t in their first home. 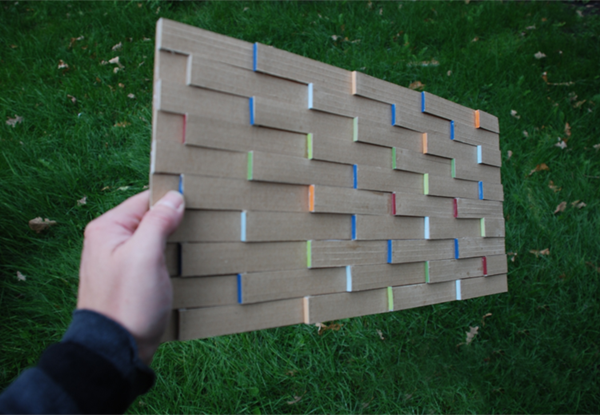 The decision to reclaim the maple flooring to use on the feature wall was three-fold: first to recognize the roller rink’s important history in the community on this site, secondly to demonstrate a sustainable design approach to optimize the use of recycled materials in the building construction, and lastly to make it a beautiful central feature of the building. The coloured ends of the wood panel sections also serve a symbolic purpose in the Science Building as a graphic representation of the microarray for DNA – the building block of life.

If only the walls could talk.

Canada Life Screen: Pride of the Past

The Canada Life building on Osborne Street has been a landmark since it was first built in 1959.

Number TEN was tasked with renovating the building, mostly unchanged since the ’60s. While much of the building was updated to reflect modern values, practices and designs, there were some key elements kept for their aesthetic appeal and their connection to this history of the building. Among them was a wooden screen that originally separated a coat room from a hallway on the third floor. The design team had the screen reinstalled on the first floor, where it lends a flourish of mid-century elegance to a high-traffic corridor. 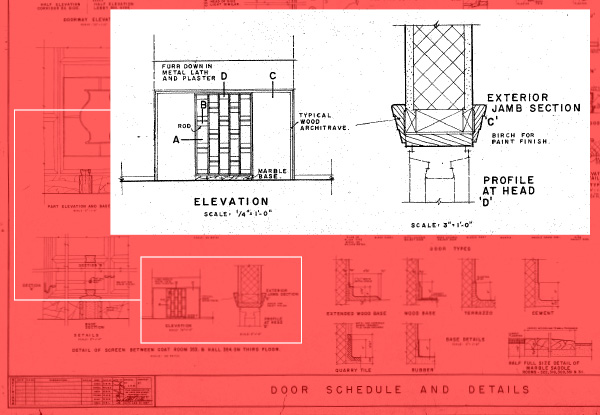 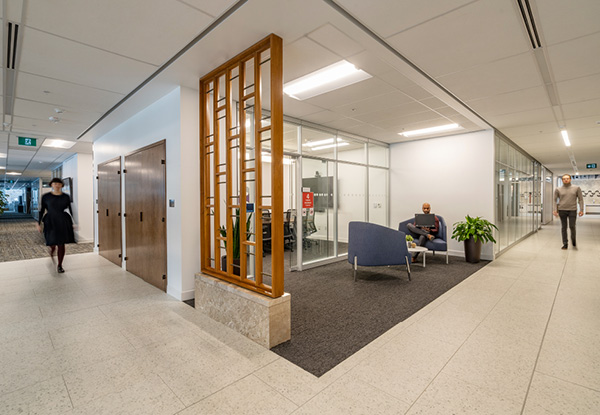 The wood and brass screen, carefully restored and proudly mounted a new refurbished marble base, is a reminder to carry the best of the past into the future.

Prominently situated within the Forks Market Common, Passero is an upscale micro-restaurant offering contemporary Italian cuisine and a unique fine dining atmosphere. The 44-seat restaurant offers a sophisticated blend of old and new, with signature design elements carefully juxtaposed with the historic industrial character of the recently revitalized Forks Market. 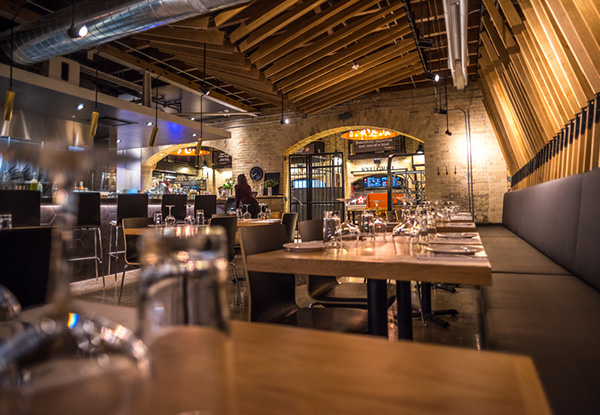 Passero is organized around an open-kitchen layout and showcases elegant materials and finishes including a quartz bar and a unique wood banquet wall. The semi-transparent wall is physically attached to a custom designed steel bench seating fixture. The resulting space has a strong sense of cohesion and unity as the parametrically angled solid oak slats, illuminated dramatically from below, rise from the back of the bench to the ceiling. A wood ceiling feature mirrors the design of the banquet wall, and both complement the reclaimed elm tables in the Forks Market Common and exposed wooden joists of the original heritage structure. 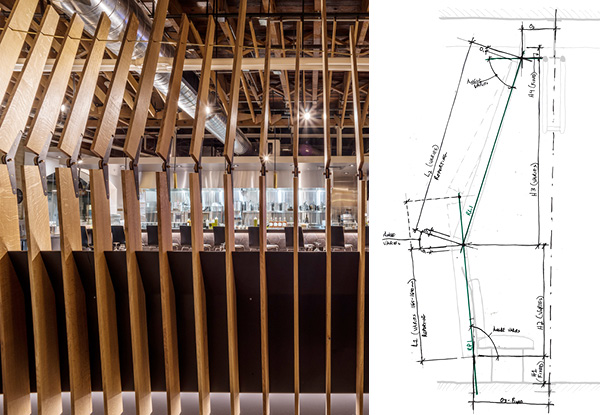 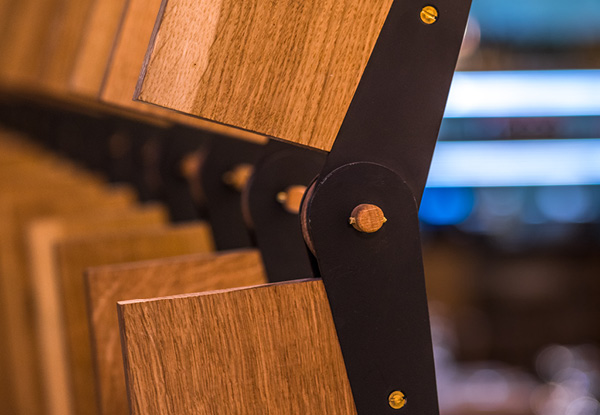 The success of the oak panels was the result of close collaboration with design-built, whose ingenuity and craft brought the wall to life. The parametrically angled slats brought with them many complexities as every joint had a unique angle. Honesty to construction methods is a core sensibility that design-built often relies on to help guide their final design and construction details. Out of this core value the "celebrated hinge" solution was born. This method of construction allows infinitely unique angles to be accomplished without the expected set of complexities that would typically surround the parametric angle.

The slats are constructed of white oak. White oak is a favourite of many designers, as it has high strength, natural decay resistance, and is impervious to liquids. Throughout history, its durability has made it a prime choice for railroad ties, ship building, bridges, and wine barrels.

The design of Passero commands attention and serves to raise the profile of the Forks Market Common without appearing out of place. The restaurant’s sophisticated custom-designed features and high-end, historically inspired materials allow it to maintain a feeling of intimacy while tying-in thematically with renovate Forks Market. The result is a one-of-a-kind space that is the perfect complement to Winnipeg’s favorite meeting place.

Whether serving as a proud reminder of the past, or signaling hope for a better, more sustainable future, wood remains our material of choice.