For decades, one of Number TEN’s key strengths has been its large, integrated team of professional interior designers.  Following an exhaustive search in 2017, the firm expanded its capabilities in the growing commercial interiors sector by welcoming Genevieve Bergman to the team. As commercial interiors design lead, Genevieve will direct numerous initiatives to enhance Number TEN’s workplace design expertise, with a focus on strengthened client service, quality and innovation.

After spending nearly ten years developing her professional design skills in the Toronto market, Genevieve recently returned to her home-town of Winnipeg, bringing with her extensive knowledge and a well-rounded skill-set developed through experience on a variety of innovative projects for clients such as Deloitte, MasterCard, RBC, and Holt Renfrew. She has also been a key contributor to a number of award winning Toronto projects such as the Edelman PR, Fuel Advertising and Saatchi & Saatchi office interiors projects.

“We are thrilled to add a professional of Genevieve’s calibre to the team,” says Commercial and Residential Studio principal and partner Barrie Ottenbreit. “Her advanced design and project management skills, combined with her energetic and friendly personality will further strengthen Number TEN’s interior design capabilities resulting in enhanced client service, design quality and thought leadership.”

Genevieve’s passion for design innovation and client collaboration, combined with her positive attitude and business disposition make her a valuable asset to the Number TEN team.

“Design to me is the perfect combination of beauty and function, it’s why I do what I do,” Genevieve says. “Design affects how we function in our everyday surroundings and plays a great part in our well-being, productivity and mood.”

“I enjoy working in a collaborative environment with clients and colleagues and that is something that really intrigued me about this firm. It’s a place where new ideas are welcomed and encouraged, and the concept of teamwork is strongly valued. I’m very excited to be back home and humbled by the opportunity to work with the talented interior design staff at Number TEN.”

The future of skilled trades education in Manitoba was on full display Thursday, March 16 as Red River College hosted a special preview event at the new 100,000 sq. ft. Skilled Trades and Technology Centre construction site. Over 200 guests had the exclusive opportunity to learn more about the showcase building at Red River College’s Notre Dame Campus that is poised to welcome up to 1,000 students per year in high-demand trades and technology in 2018. 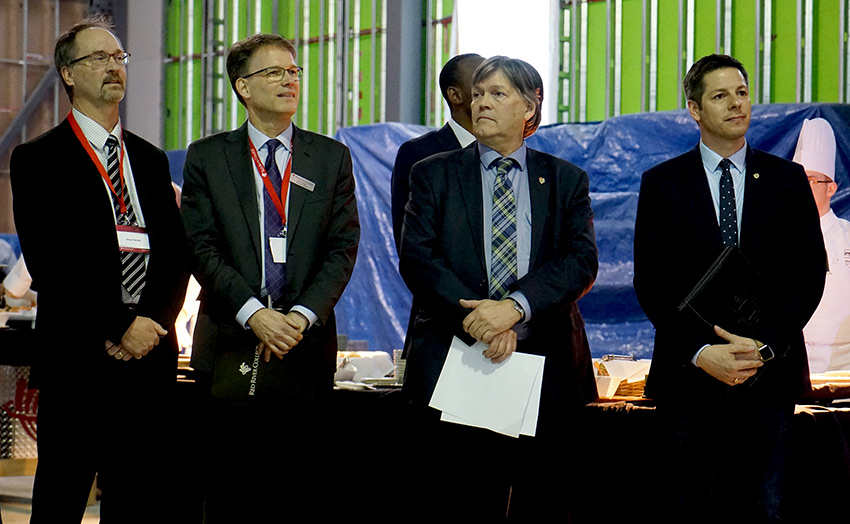 “What a spectacular building,” said Mayor Bowman during his address to the audience. “It really is a good symbol for how we are building our city.” Bowman, as well as Minister Wishart expressed awe at the sheer scale of the facility, which spans the length of two US football fields (without end zones). 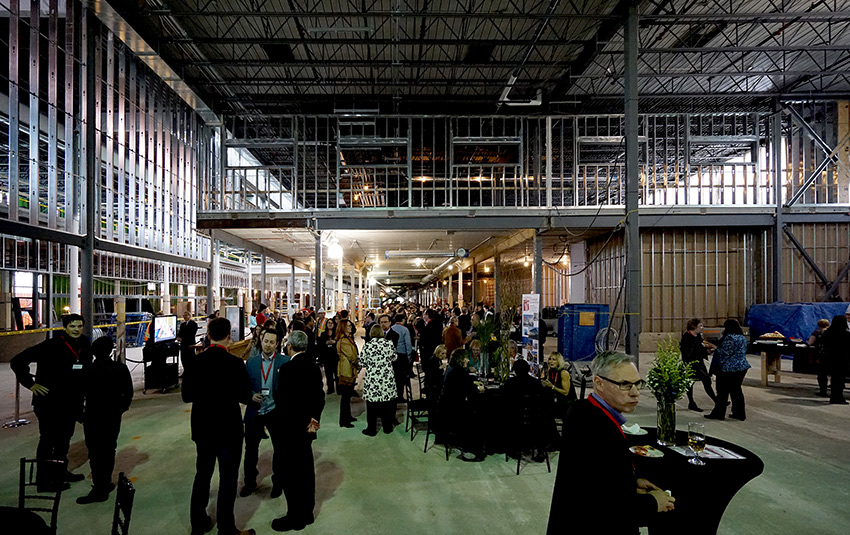 The Skilled Trades and Technology Centre, under construction, will be a game changer for the skilled trades industry in Manitoba.

President and CEO Paul Vogt added that the Skilled Trades and Technology Centre “will be a huge benefit for future leaders and will be a great resource for industry.” He described how faculty, staff and students were engaged by the architects in the design process, which he feels will “enhance its value for future students.” Vogt also described how the LEED-Gold target building embodies Red River College’s values of sustainability as well as leadership in applied research, technology and innovation.

Number TEN as Prime Consultant worked closely with the Saskatchewan Ministry of Education, Regina Public Schools, as well as teachers, students and community members to design a new school that reflects the character of Regina’s Cathedral neighbourhood while also meeting the needs of 21st century learners. The innovative school project, currently under construction, is scheduled to open in time for the 2017 academic year. Check out the Number-TEN-produced 3D flythrough tour of Regina’s newest 21st century school!


Stay tuned for more information on this and other projects on numberten.com

"Number TEN is excited to work with TDS Law as project leaders for their significant investment in the continued transformation of downtown Winnipeg. Our talented group of interior designers, architects and project managers are ready to deliver a leading-edge workplace environment that reflects TDS’ forward-thinking vision as one of the anchor tenants of True North Square.”

Number TEN’s design team is bolstered by figure3’s extensive experience designing world class office space for some of Canada’s most innovative legal practices. “The practice of law continues to evolve and modernise as we’ve seen through our experience partnering with many of Canada’s leading law firms,” says figure3 principal and lead interior designer Allan Guinan.

“TDS has set out a vision for a more efficient and collaborative firm culture. We’re looking forward to the challenge of defining the next generation of law firm design by providing dynamic solutions that directly address these needs”.

After a remarkable 31-year tenure as a Partner with Number TEN, Robert Eastwood completed his carefully planned transition in March to his new role as a senior advisor to the firm. To the casual observer, it may appear as though not much has changed. Eastwood still works out of the same office, still puts in countless hours working on projects, and apart from a recent low-key office celebration of his professional accomplishments, work continues on much as before. In short, he is still the same person he always was: a hard-working family man who lives and breathes architecture. 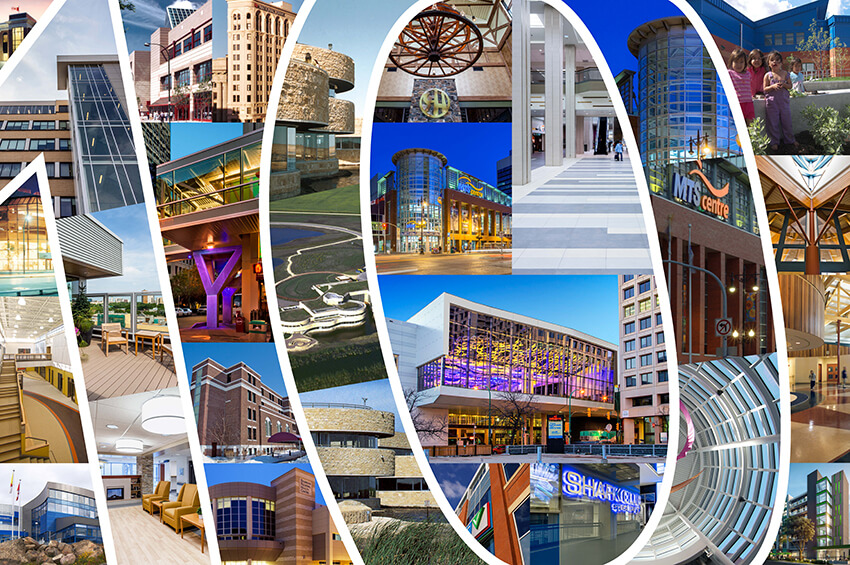 Image: A selection of Bob Eastwood's projects, completed during his long career at Number TEN

Number TEN’s commitment to innovation was well-demonstrated in the last few months as Number TEN Partner and Practice Leader Greg Hasiuk attended a number of local and national symposiums, workshops and events on the theme of innovation in the 21st century.

In February, Greg attended the Canadian Construction Innovations (CCI) annual general meeting in Toronto. Established in 2009, CCI is committed to facilitating communication and teamwork within the construction industry in order to promote and streamline industry-wide innovation.

The Number TEN Partners are very pleased to announce that seven of our team members have accepted roles as Associates, and will be joining our new Associate Group as leaders in our firm. Number TEN created the Associate Group to broaden involvement in firm-wide strategic planning, firm management, business development and leadership succession. Each of these individuals possesses a balance of experience and skills that will undoubtedly translate into continued success for our firm, as well as our clients, well into the future.

Seven Stones Community School in Regina, SK, earned a prestigious Award of Distinction from the Association for Learning Environments (formerly CEFPI) on Sunday, October 25 at its 2015 LearningScapes Conference in San Diego, California. Along with four other international school projects, Seven Stones beat out over 90 project entries submitted by architecture firms from around the world.

“This is our second project with Regina Public Schools to be recognized for design excellence, the other being Douglas Park Elementary School in 2013.  The leadership of Regina Public Schools and the support of the community have been instrumental in creating these innovative learning environments,” says Hasiuk.

In addition to the awards presentation, the exposition included a variety of workshops, panel discussions and tours of innovative learning environments in the Southern California region. Many of the world’s most prominent education facility design leaders were in attendance, sharing ideas and discussing advancements in educational facility design.

"Number TEN considers research and innovation as important pillars of our ability to deliver design excellence.  Attending industry leading conferences such as these are pivotal.” For more information on all of the 2015 Awards of Distinction projects, click here.

Already the recipient of a People’s Choice award from the Council of Educational Facility Planners International (CEFPI) Pacific Region, and currently nominated for an international award at this weekend’s CEFPI Exposition of School Planning and Architecture in San Diego, CA, Regina’s Seven Stones Community School can now add LEED ® Gold to its growing list of accomplishments.

On Wednesday, October 21, the Canada Green Building Council officially recognized LEED Gold status for the innovative K-8 school, designed by Number TEN in partnership with Fielding Nair International for Regina Public Schools.
“We are so happy for the way this project came together. This achievement is the result of a vision set out by an entire community, and through Regina Public Schools’ willingness to explore new ways of teaching and learning as a means to more effectively engage today’s youth,” says Number TEN practice leader Greg Hasiuk.
“The LEED Gold credential reminds students that their school is much more than just a cool new building; it is a facility that clearly demonstrates that protecting our environment is important. That’s something I think the kids, teachers and the entire community are very proud of.”
The LEED Gold Status surpassed the project’s initial target of LEED Silver, thanks to an impressive list of green design features such as in-slab radiant floor heating and cooling, a displacement HVAC system, high-efficiency boilers, extensive use of recycled materials, daylighting strategies, a high-performance building envelope, and distinctive south facing exterior sunshade panels. 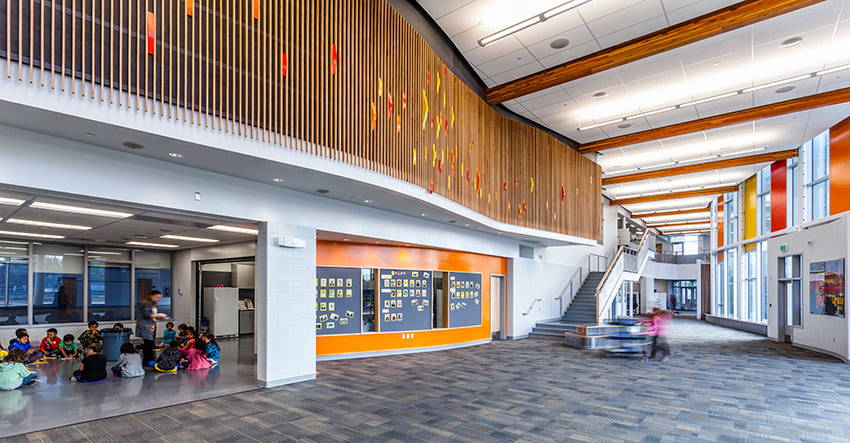 But the story of environmental preservation extends far beyond the typical energy performance and cost-saving design strategies. Seven Stones takes the concept of sustainable design an important step further by highlighting its green features to educate the next generation about environmental stewardship.
Much like a ‘3-D textbook’, the school’s green features, such as its tubular skylights, in-floor heating and ventilation systems are intentionally exposed to educate students about the importance of environmental preservation. At the main entry, an educational green kiosk displays real-time energy savings to encourage green thinking while inspiring and reminding students and other building users of the value of environmental sustainability. 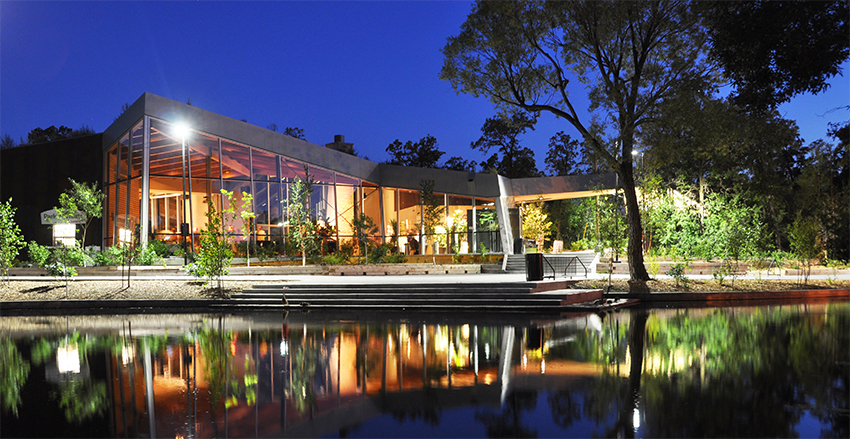 An important tradition in Manitoba’s architecture and design industry was reinstated on Wednesday, October 15 when the Premier’s Awards for Design Excellence were given out to a handful of prominent Winnipeg design firms at the Manitoba Legislature for the first time in three decades.

Number TEN’s Brent Bellamy and Doug Hanna accepted an Award of Merit for the Qualico Family Centre at Assiniboine Park. The unique facility, nestled seamlessly into its park surroundings at the edge of a tranquil duck pond, has become a favorite locale for park visitors. The building serves as a gathering place, restaurant, multi-purpose and children’s activity space as well as a fireplace lounge – amenities that were previously absent from Assiniboine Park, one of Winnipeg’s most significant and popular attractions. 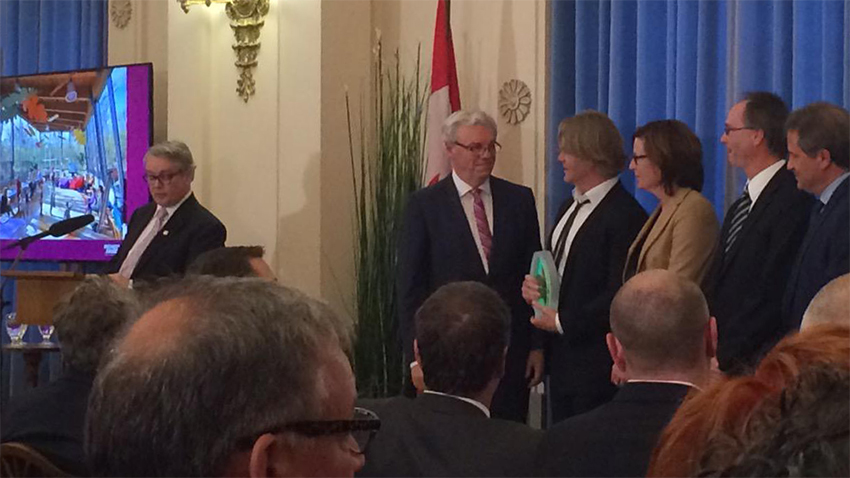 “It is an honour to have a project recognized among such an inspiring collection of work from a design community that is transforming Winnipeg’s image on the national stage,” says Bellamy. “The success of the Family Centre is the result of a visionary client who has been committed to re-establishing Assiniboine Park’s place as a jewel in our city’s crown. It has been a humbling and personally fulfilling experience to join them on that journey.”

According to Bellamy, the goal for the design was to create a responsible, evocative and emotionally inspiring building rooted to its site, resonating with its specific place and greater context. Structure, space and materials, he says, are choreographed to the rhythms of nature, expressing the beauty and power of the landscape.

The Premier’s Award for Design Excellence originated as the Product Awards in the 1970’s. The bi-annual awards, last presented in the 1980s, have been reinstated to honour the significant contributions made by architects and professional interior designers to the social, cultural, artistic and economic development of Manitoba, Premier Greg Selinger said in a government release.