Up There With The Best

Number TEN Architectural Group was presented with an award in recognition of its status as One of Canada’s Best Managed Companies at an elegant gala and symposium event on March 31, 2015 in Toronto. 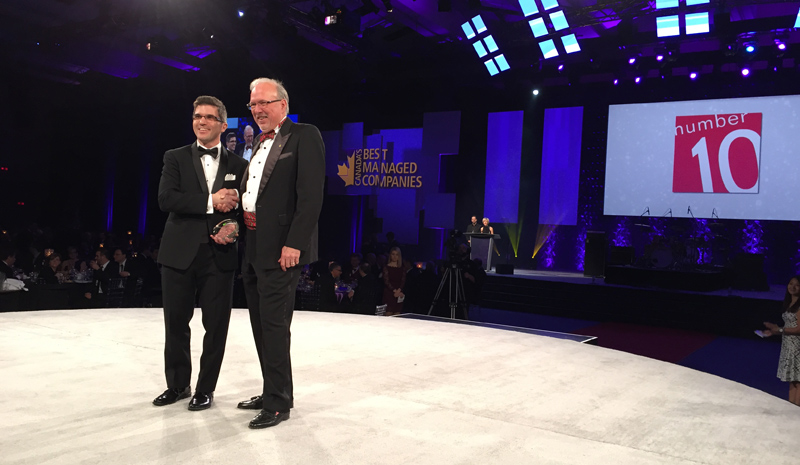 The event, attended by all of Number TEN’s six current partners and recently retired partner Terry Cristall, included a symposium addressing leading-edge business issues that are key to the success of today’s business leaders. For more information on the best managed companies program, please visit www.bestmanagedcompanies.ca

Number TEN’s design of the Qualico Family Centre and Park Cafe was recognized with a Prairie Wood Design Award presented at a gala event on March 17, 2015 at the Fairmont Hotel MacDonald in Edmonton, AB. One of the central components to the first phase Assiniboine Park’s redevelopment, the Family Centre features a unique nature-inspired design that offers beautiful views of the duck pond and surrounding forest.

Upon entering, visitors pass through a compressed entry vestibule into an expansive sun lit gallery. Internal spaces are defined by a fractured roof geometry of warm heavy timber that evokes an image of walking beneath the forest canopy.

Wood floors are made from oak trees lost during the construction of the facility. Soaring transparent walls allow the trees themselves to define the boundaries of each space, as if the rooms were carved from the forest, blurring the distinction between inside and out.

The Prairie Wood Design Awards recognize the vision of architects, engineers, contractors and manufacturers in creating beautiful, functional and sustainable buildings for us to work and live in. The Qualico Family Centre and Park Café also earned a Commerce Design Award in 2014.

For more information about this project, please click here. 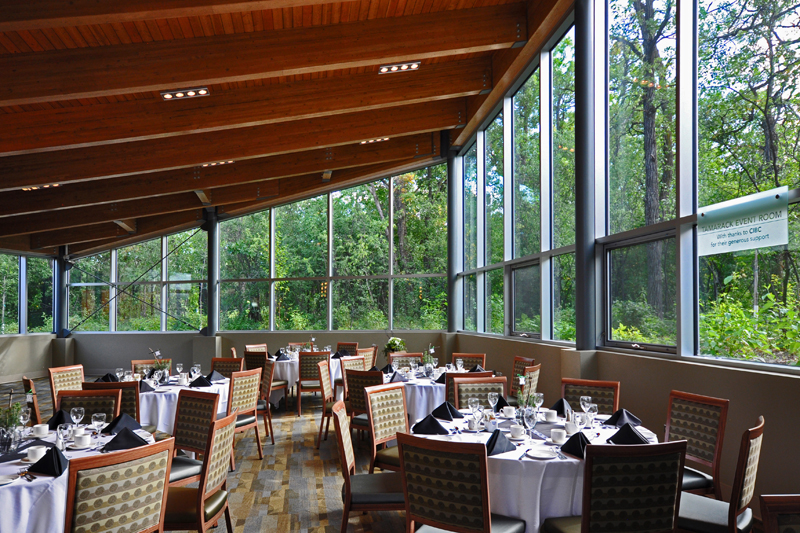 Number TEN earned the title of one of Canada’s Best Managed Companies program for 2014, sponsored by Deloitte, CIBC, National Post, Queen’s School of Business and MacKay CEO Forums. “I would like to congratulate Number TEN and its entire workforce. Achieving this standard of excellence takes a united effort from a dedicated team,” says Peter Brown, National Co-Leader of Canada’s Best Managed Companies Program and Senior Practice Partner, Deloitte.

An extraordinarily complex healthcare redevelopment project was unveiled today during a ribbon cutting ceremony at the new Buhler Eye Care Centre, part of an ambitious redevelopment occurring at Misericordia Health Centre in Winnipeg. President and COO Rosie Jacuzzie declared phase one of the redevelopment complete and offered words of thanks to the many stakeholders who helped make the eight-year project a definitive success. 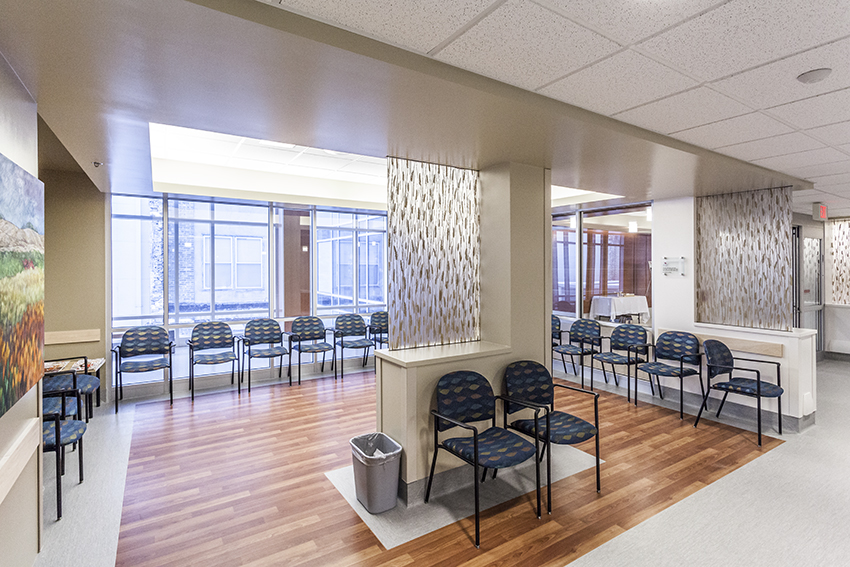 One of the principal challenges of the project was to maintain full healthcare operations during construction, which was made possible by a carefully coordinated and executed phasing plan led by architectural prime consultant Number TEN Architectural Group. The first phase of the redevelopment includes the new Buhler Eye Care Centre, a new ambulatory diagnostic centre, and space for the new PRIME program, which offers elderly patients a variety of healthcare, wellness, community and recreational programming to assist them in remaining in their own homes as long as possible. 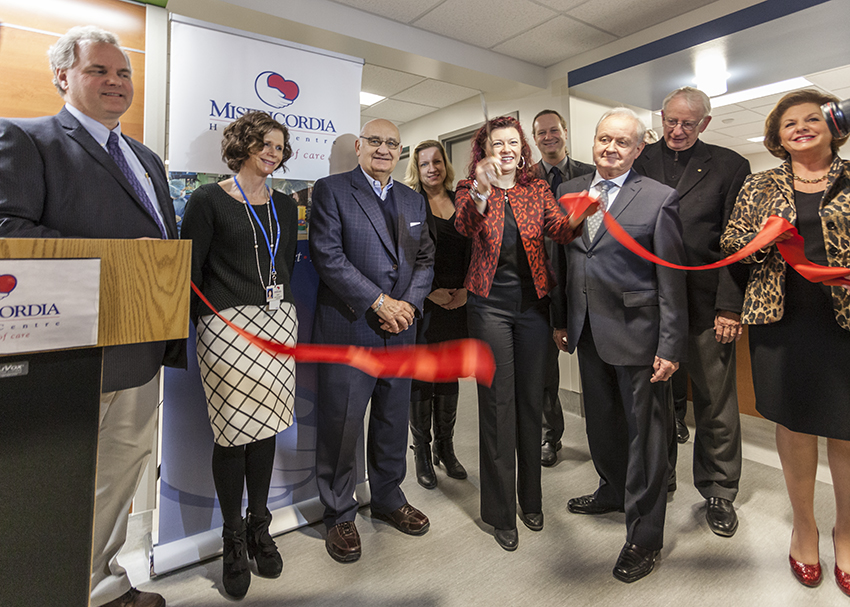 Number TEN provided full architectural, planning and interior design services as part of the 85,000 sq.ft. (7896 sq.m) project, plus approximately 20,000 sq.ft. of renovation in the existing buildings. 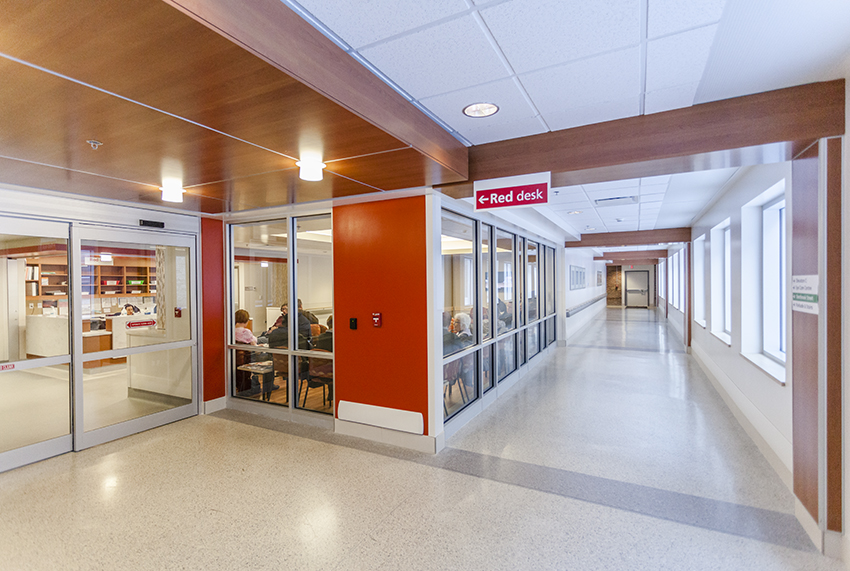 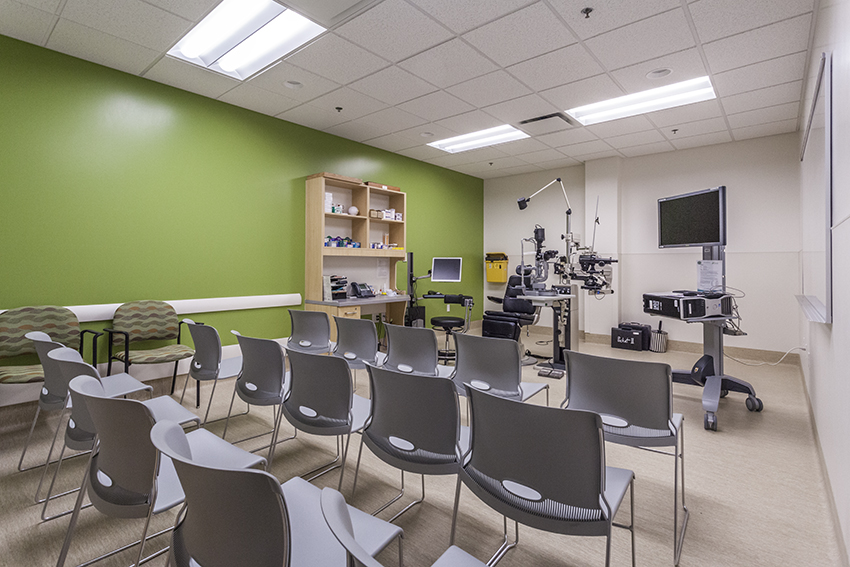 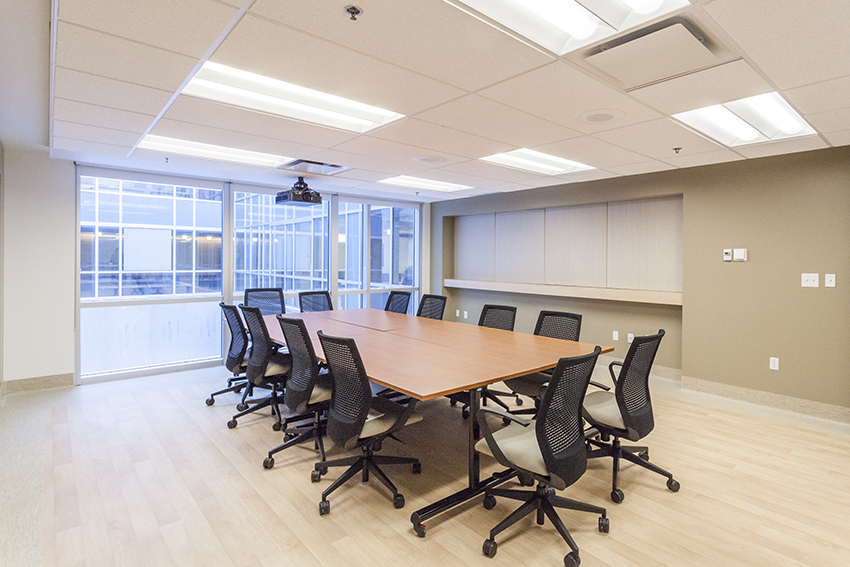 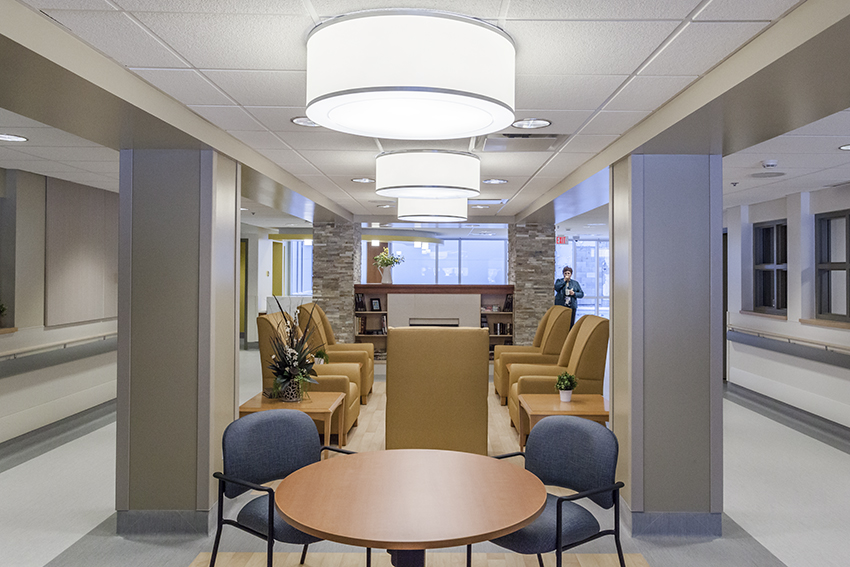 “It was amazing to see the excitement on the students’ faces as they interacted with the new space,” says Christina Legris, Project Architect with Number TEN Architectural Group. “They put on a fantastic event and we were very impressed with the student performances. The acoustics and overall layout of the space worked exactly as we intended them to. It’s always wonderful to see the vision of an entire community come together.”

The new student commons area is unlike any other in Winnipeg. The goal of the project was to connect two separate school facilities in both a physical and social sense, while drawing inspiration from the natural calmness and tranquility of a birch-wood forest. 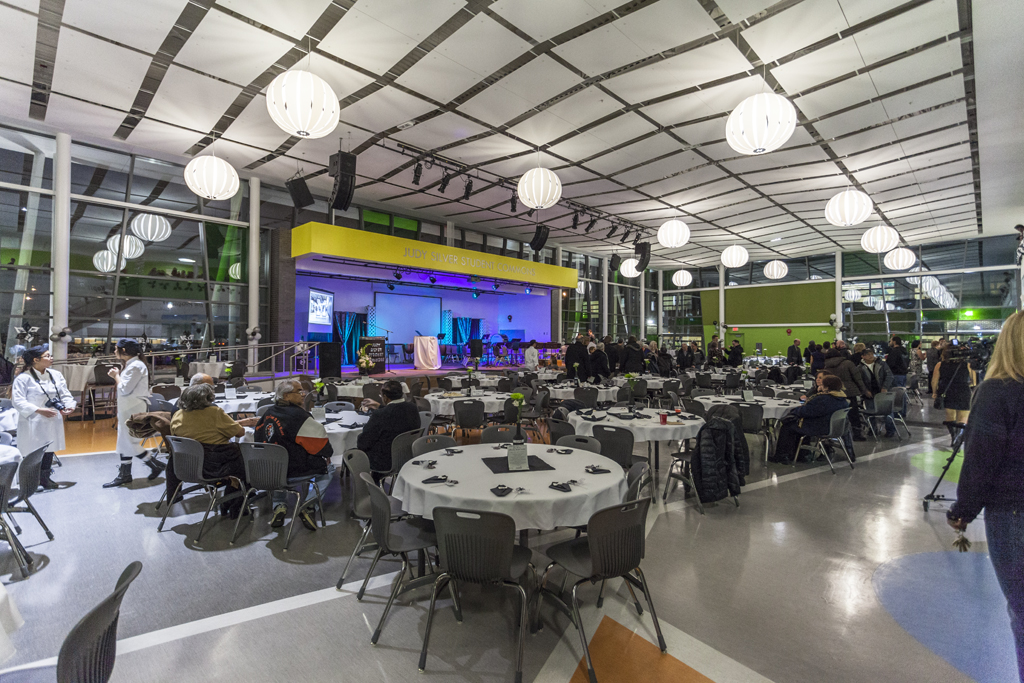 “The addition was conceived as a transparent cube with a deep sheltering roof that sits within a grouping of trees,” explains Doug Hanna, a Partner with Number TEN. “Irregularly spaced and angled columns were inspired by the randomness of a forest. The windows and coloured glass create a visual connection between the exterior soft landscape and interior of the commons.”

The interior design re-enforces the forest theme, with a bright yet natural colour palette and intricate patterning inspired from the randomness of nature. “The angled columns were reflected in the interior design, using patterns and circles that create a stimulating and fun environment for the students and community,” says Kristin Sidoryk, an interior designer at Number TEN. “The shadows created from the way natural light is drawn into the space interact with the patterning on the floor, adding energy and character to the room.” 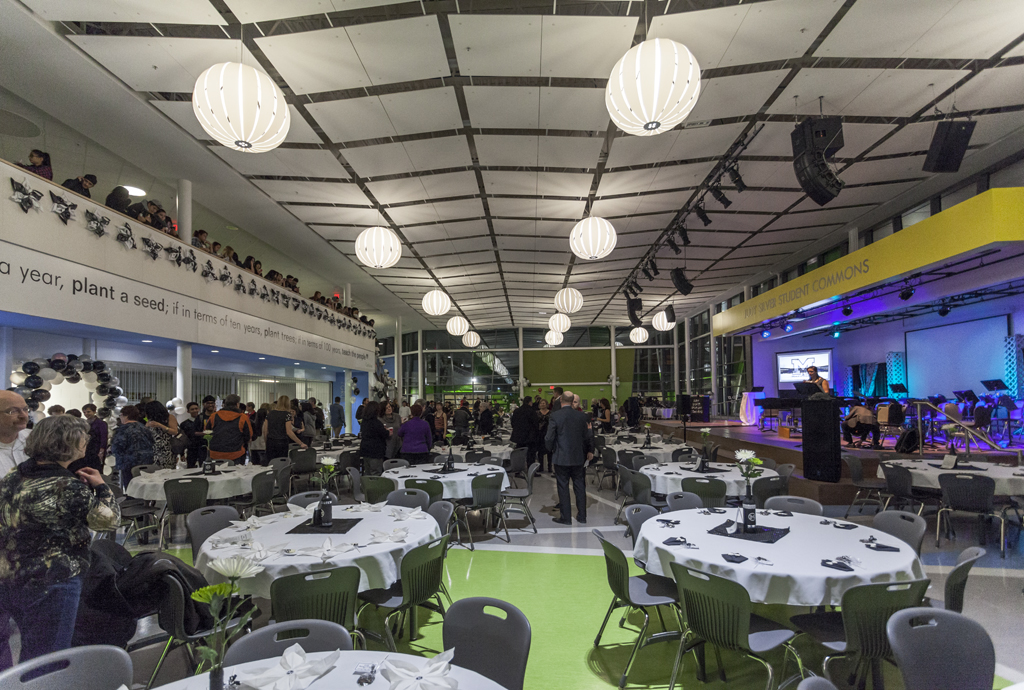 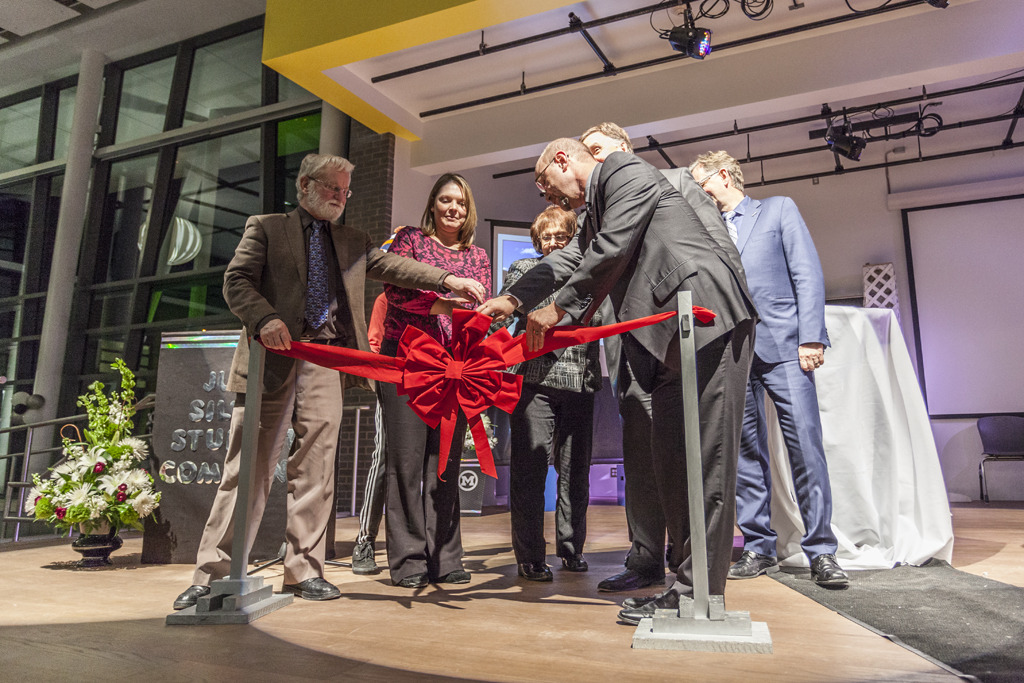 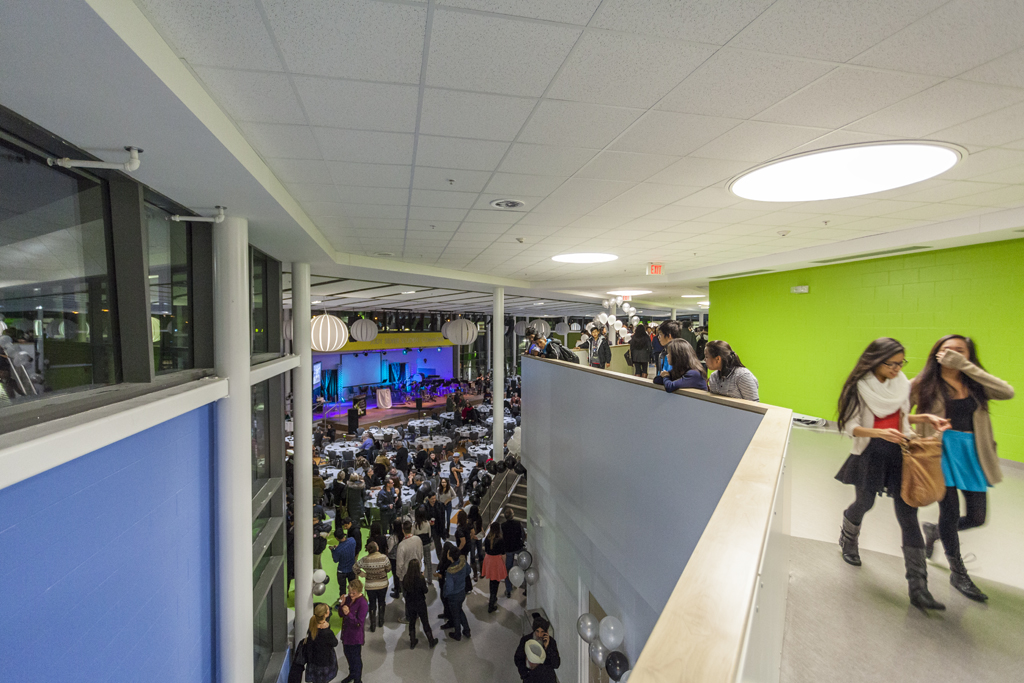 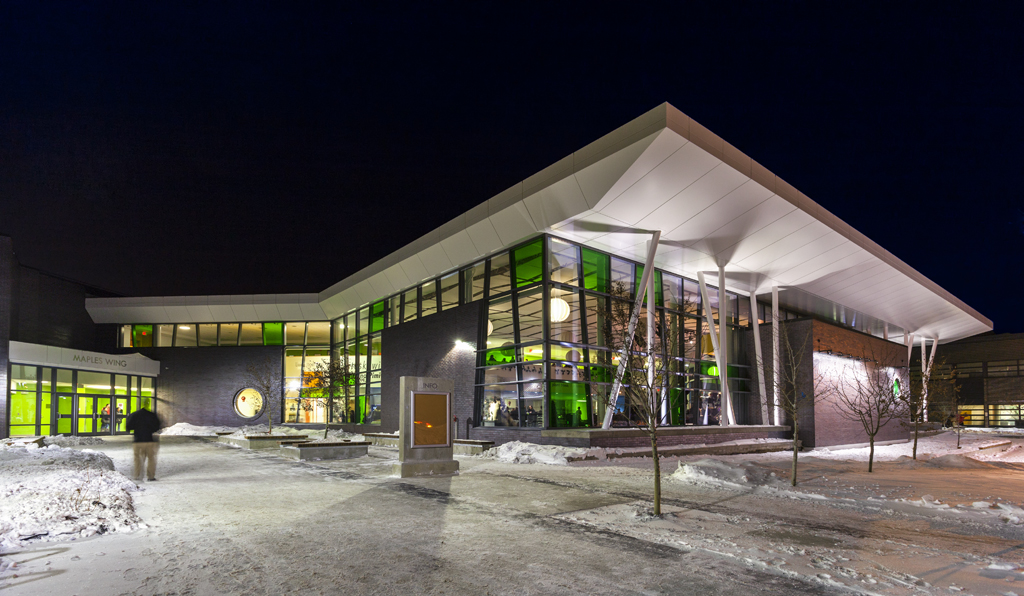 End of and Era: Farewell to John Wassenaar

After an incredible 46 years of dedicated service, Number TEN said farewell to its longest serving employee, John Wassenaar today. Known as the ‘Cal Ripken Jr. of Number TEN’ for his legendary consistency and durability, John’s tenure with the firm began in 1968 when he was hired to produce blue prints in the firm’s early days at #10 Donald Street.

After year’s of hard work, John’s keen interest in blue printing would evolve into a role as a draftsman with the firm. His talents would then evolve to construction administration, where he honed his skills for over 30 years until his retirement on November 28, 2014.

John is known throughout the construction industry for his approachable nature, level-headed perspective and solid common sense. Throughout his career, he applied his skills on a wide variety of projects across multiple industry sectors including schools, hospitality and entertainment facilities as well as a host of civic and commercial projects.
In the 1980’s, John organized Number TEN’s first softball team and would bring his entire family out to either play or cheer the team on. He is also known for his strong golfing and bowling abilities, the latter of which he demonstrated at his well-attended staff retirement celebration held at Laverendrye Lanes last evening. John also enjoys relaxing at his cottage on Baconia beach, or heading down south to enjoy the Florida sun in the winter.

We wish John continued health, happiness and well-earned relaxation and family time in his retirement. His dedication to his clients, wide and friendly smile, and keen sense of humour will be dearly missed at Number TEN.
Congratulations John for your well-earned retirement. 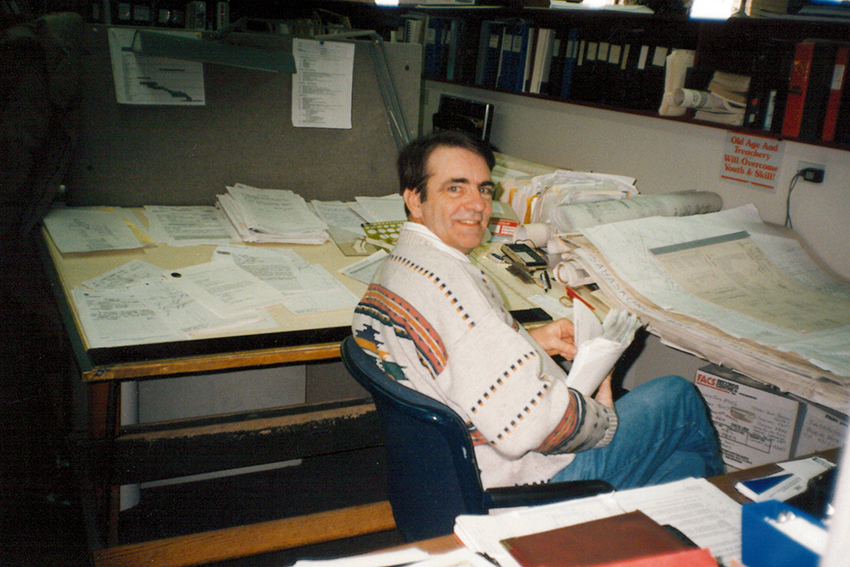 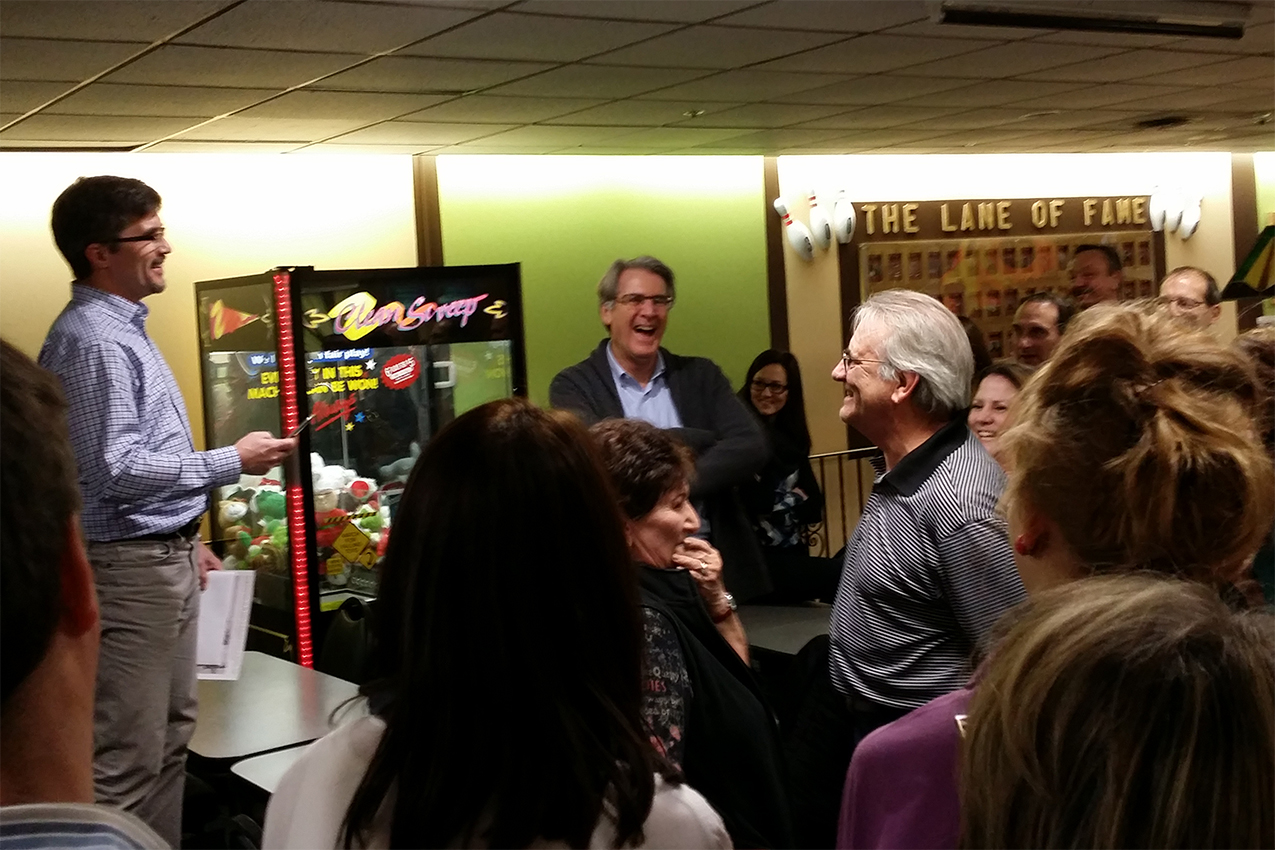 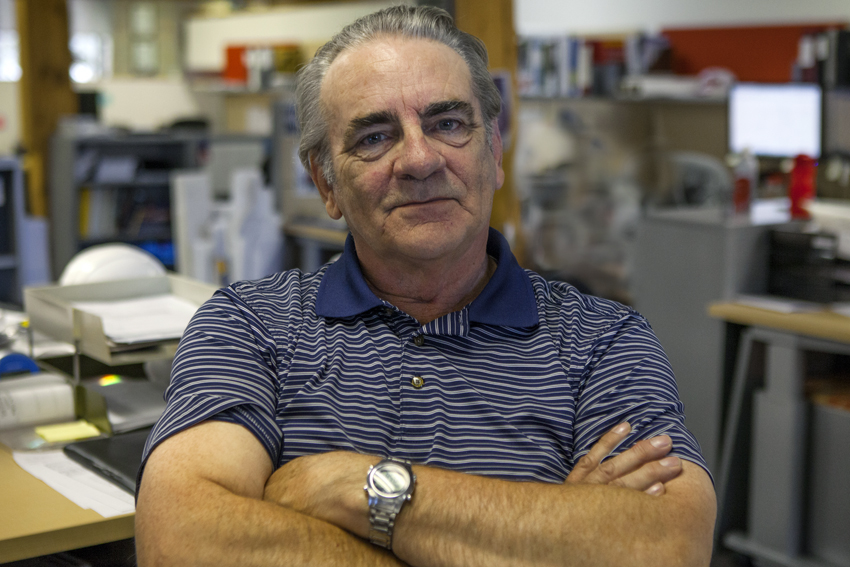 Number TEN is putting the finishing touches on the newly upgraded Canadian Coast Guard Station at Bamfield Inlet near Tofino, BC.

Our ten year involvement with the Department of Fisheries and Oceans began with a master plan study in 2005 and has since seen the construction of the new Rigid Hull Instructors Operators Training School (RHIOT), a new simulator building with video-based virtual marine training equipment to train the inflatable boat operators, a new Operations building for the Coast Guard's Search and Rescue services, and major renovations to the two residences on the site that house the Coast Guard and RHIOT staff.

The multi-million dollar revitalization of the Coast Guard Station at Bamfield, originally established in 1907, is wrapping up with the new site work tying all the buildings together and will be commemorated with a symbolic grand re-opening of the station in the spring of 2015. 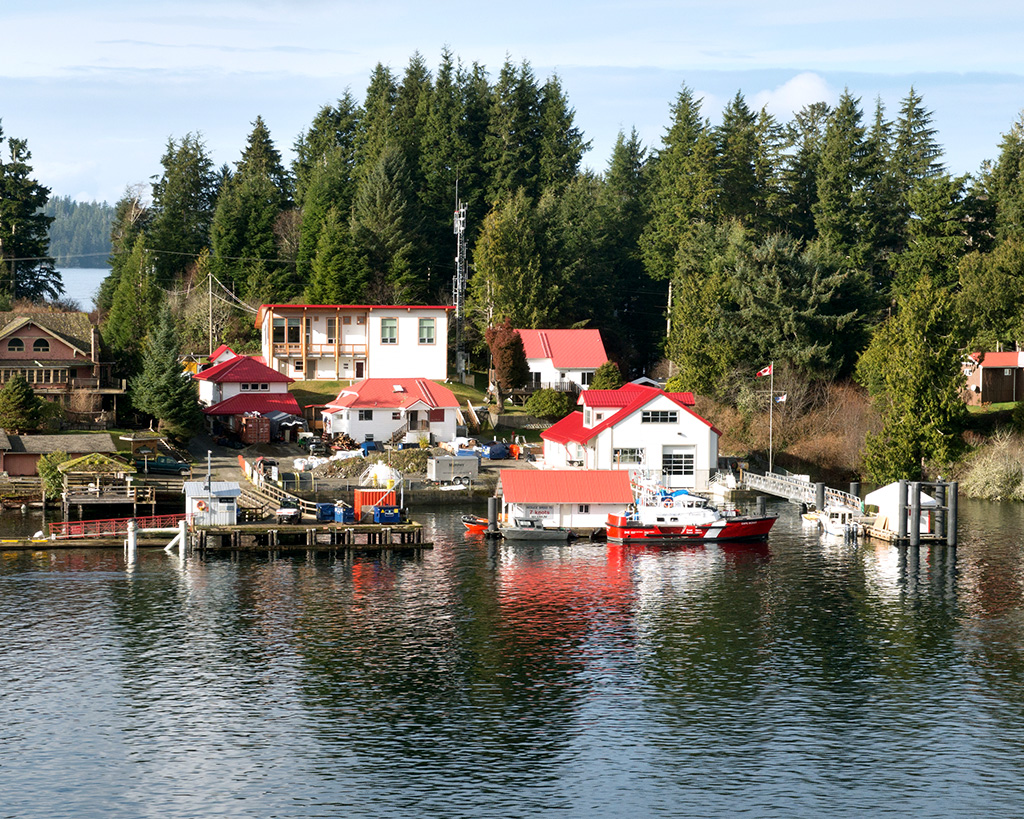 Earlier this month, Number TEN volunteers from the Education and Recreation Studio ran a design-build session with students from Seven Oaks School Division's MET High School program in Winnipeg. The goal was to engage students in a challenge to design and build a landscape feature that reflects the innovative spirit and hands-on learning culture of the school; with an emphasis on teamwork, sustainability and creative problem solving. The Number TEN project, dubbed Make Your Mark, is part of an international initiative called the Green Apple Day of Service, which aims to transform schools into healthy, safe and productive learning environments through local volunteer service projects. 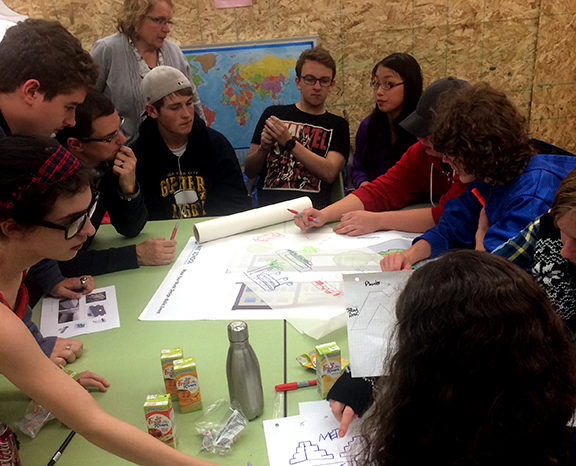 “This was a very rewarding experience for our team – there were so many great ideas from the students, and to see them come to life on the site was very exciting,” says Number TEN architect Gabe Derksen, an advocate for green building and 21st century school design. “It’s not often that students are given an opportunity to put their own personal stamp on their place of learning.”

Using reclaimed materials from the recent renovation of their school, Number TEN’s volunteer team, led by Derksen and backed by a volunteer team of architects, interior designers and technologists guided students in the development of a building strategy plan, followed by a build session where the students constructed the project on-site in just one day.

The students successfully put together a beautiful project featuring oversized “MET” signage; a bench made from reclaimed lumber, stairs and concrete blocks; as well as a flower bed and screen wall feature which includes student artwork constructed from reclaimed sections of concrete sidewalk. The flower bed and signage will remain on site permanently.

Number TEN Partner and Education Studio Principal Doug Hanna saw the Green Apple Day of service as an excellent opportunity to engage youth in design and involve them in a greater conversation around the importance of environmental responsibility. “The Green Apple Day of Service is a great way for us to give back to the school community through volunteer effort,” says Hanna. “But the biggest reward for us is seeing the students so engaged in creating part of their future school environment and taking ownership of it in the process.” 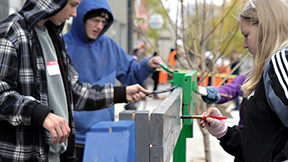 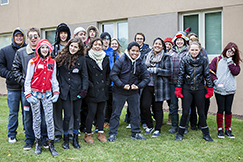 Number TEN’s Victoria office is conducting a design study for a unique multi-residential housing project on Vancouver Island that would be constructed entirely out of re-purposed steel shipping containers. The study assesses the viability of modifying surplus steel containers from a large import/export business, shipping them directly from the factory to the site for final assembly.

The design study, which aims to create more affordable rental housing options on Vancouver Island, envisions a three-storey, 35 apartment complex comprised of 35.5 sq.m. (382 sq.ft.) one-bedroom units. The project is currently awaiting a suitable site on which to construct a prototype building.

Number TEN was invited to participate in an Architectural Institute of British Columbia exhibition to promote bird-friendly development in Vancouver. According to a recent study by Avian Conservation and Ecology, up to 42 million birds are killed each year in Canada from collisions with windows.